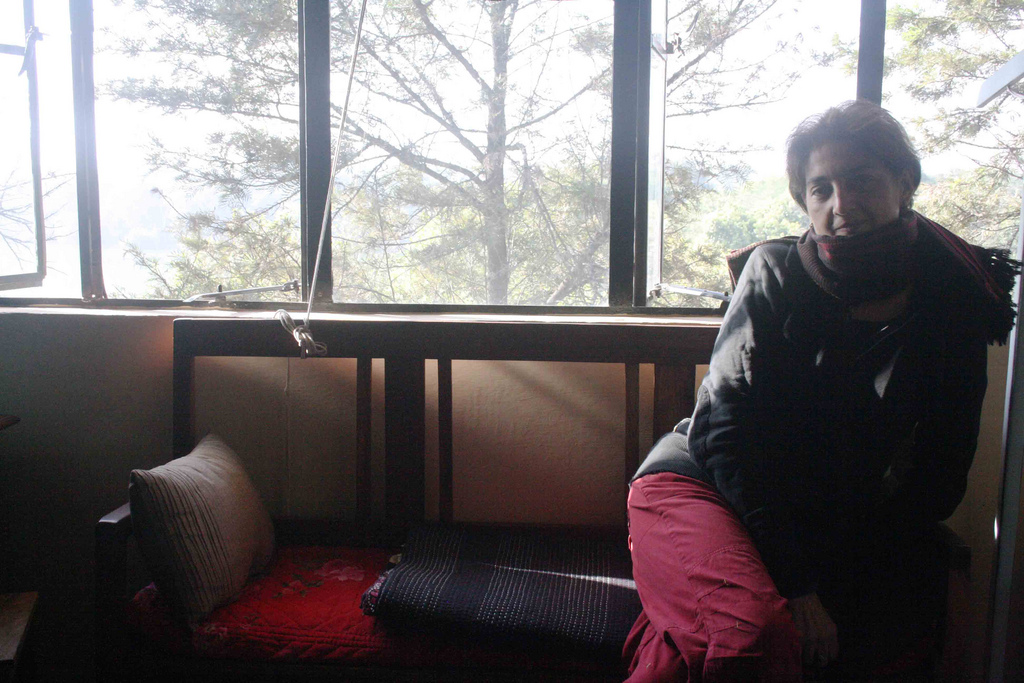 It’s mid-morning but it doesn’t matter to her. “Time doesn’t exist in my life,” says painter Usha Hooda as she dabs her brush in a heap of burnt sienna. “I’m 54, I think, but I’m not bothered. If you start believing that you could do only this at this age, that’s the end. You can’t limit yourself, especially for someone in my situation. I’ve cancer.”

The Delhi Walla is meeting Ms Hooda at her second-floor studio in Hauz Khas Village, a neighbourhood in south Delhi. Commissioned by a collector, she is painting buzkashi horse riders of Afghanistan with a controlled recklessness. Nimbly moving her brush across the canvas – drawing a stroke, making a stabbing motion – she has a personality to match. Her figure is lean, her voice is sharp and her hair is cropped. As a passionate Enfield bike-rider, her tips are alarming. “Everyone must ride a bike once in a lifetime to feel real freedom,” she says while giving the finishing stroke to a horse’s chest. “Of course, it should be done without a helmet.”

Forthright in her opinions, the painter focuses on people. “I draw real people, who are not affected by the society’s pretensions.” Ms Hooda search for them by trekking in the higher reaches of Himalayas in Uttaranchal, Himachal Pradesh and Ladakh. “I also love the sea. My son… he’s a free soul. He lives in the Andaman Island.”

Born in Hissar, Haryana, Ms Hooda grew up in Chandigarh. Since her husband was working with Air India, she lived in Tehran, Sydney, Tokyo and Paris. “Tehran was most fascinating. Iranians have amazingly medieval features, with a strange mix of savagery and style.”

The cell phone rings. Ms Hooda talks while continuing with the canvas. “Hmmm… the doctor has to look at my CAT scan… hopefully, I won’t need a surgery…”

After putting the phone on her wooden palette, Ms Hooda kneels back, squints her right eye and examines the work-in-progress. Suddenly she says, “But why talk to me? I’m not a genuine artist. I don’t belong to the art fraternity. I’ve never been to an art school. I never had a godfather. I don’t have ‘x’ number of exhibitions.” She gets up and lies down on the Afghani kilim and snuggles to Maya, the nine-year-old rottweiler.

The room is filled with calming electronic tunes of the Swedish group Solar Fields. “It’s my favorite music. It’s pure feeling.” The studio has a dining table with a rough surface, a four-poster bed and a few settees. In this eclectic room, there is also a piano, a guitar, a tabla set and a few of Ms Hooda’s paintings. From a distance, the window shows nothing but trees.

Ms Hooda came to Hauz Khas in 2008. Her daughter, a designer, also works from here. They live in Som Vihar, a few miles away, and spend the day in the studio. “The village has a buzz of creativity. You can sense it in the air.”

“Creative people are neurotic”, I casually remark. “But I love neurotics. They are straightforward.” Returning to her canvas, she says, “If art is a market, then I don’t know what it is. I don’t care what people purchase, especially those who consult curators and art critics. If you don’t buy what your eyes love, you should hang yourself.”

Many of Ms Hooda’s paintings are female nudes; some are striking for their directness. An outstanding work is a young, flamboyant woman with a hibiscus flower in her hair. “My attachment to a painting ends once I finish it.” Next week Ms Hooda is leaving for Goa. “The cancer was diagnosed three years ago. I could just live on.”

[This is the 35th portrait of the Mission Delhi project]

Usha Hooda and her window view Time out with Maya