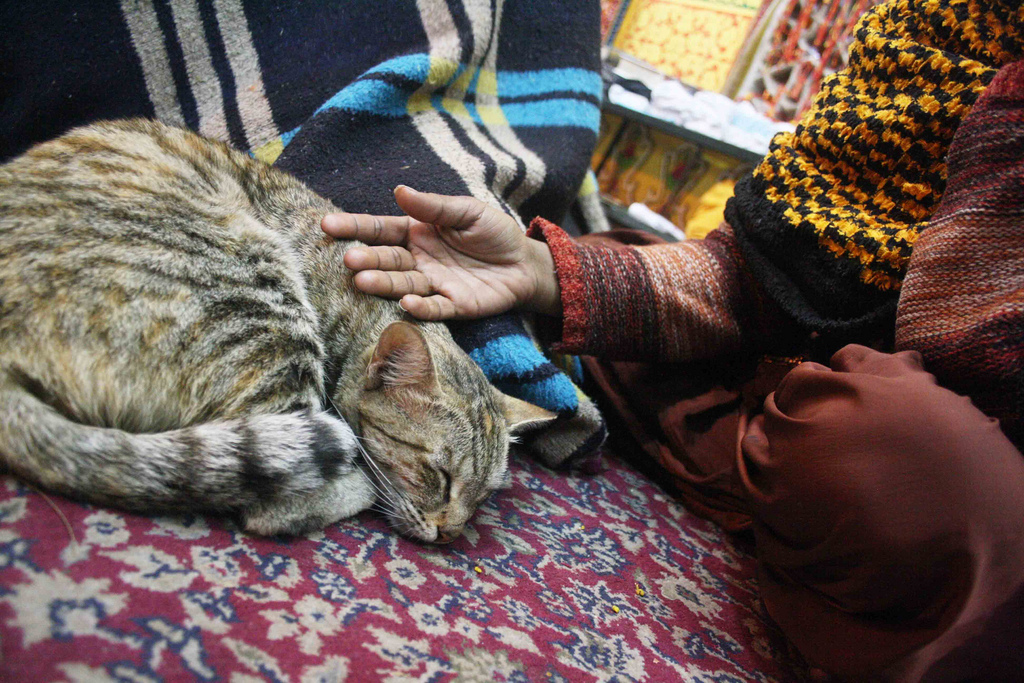 He gazes down on the marble floor. One minute. Two minutes. Three minutes. Eleven minutes. He is immobile. Pilgrims walk around him. A few pat him. One child playfully pulls his tail. One takes his photo with a mobile phone camera. But he remains stock-still. A statue.

The Delhi Walla met Billi in the shrine of Hazrat Nizmauddin Auliya, Delhi’s 14th century Sufi saint. His name means ‘cat’ in Hindi. Most people call him Billi. But sometimes he is also called ‘Cat’ and ‘Catty’. His light-brown furry body is marked with black stripes. He has eight whiskers. The inside flaps of his ears have the pale red shade of raw meat.

“Billi has been here for four years,” says Farid Nizami, a khadim (caretaker) of the shrine. “There are about four cats who are permanent residents in the dargah but Billi is very different.”

Unlike the other cats, Billi is not shy of people. He never runs away from them; he never tries to look for a secluded spot. He is mostly seen sitting beside worshippers who are either praying or reading from the Quran.

In winter, Billi often jumps into people’s laps and snuggles inside their shawls.

In summer, Billi lies in the shade.

No extrovert, Billi barely looks at the crowd, and seldom seems to react to the noise and chaos so typical of pilgrim destinations.

He is like an ascetic; disdainful of the corporeal world.

When he is hungry, he sits beside anybody who happens to be eating. In Hazrat Nizmauddin dargah, like most other sufi shrines, pilgrims often eat, pray and sleep in the courtyard. Free food is served twice daily. Some pilgrims bring their own home-cooked meals.

On noticing Billi, most people give a small portion of their roti or biryani to him. Some do it out of love, others out of duty.

Unlike dogs, cats are traditionally considered holy in Islam. They are permitted to roam freely in shrines and mosques. For instance, it is rare to spot dogs in the Muslim quarters of Shahjahanabad but cats lurk everywhere: in alleys, across drains, inside bakeries, on rooftops, around electric poles, alongside butcheries.

In the book 100 Cats Who Changed Civilization: History’s Most Influential Felines, American author Sam Stall has a chapter titled Muezza: The Cat Who was Mohammed’s Favorite Cat. Explaining why cats are esteemed in Islam, Stall writes:

Felines owe this exalted status to Muezza, the adored pet of the Prophet Mohammed. One day, as his faithful pet slept on one of the sleeves of his robe, Mohammed was called away to his prayer. Rather than disturb the cat, he cut off his sleeve. When he returned, Muezza bowed to her master and received three strokes down her back in return. This blessing assured her a spot in the afterlife.

This blessing also gave a home to Billi in one of Delhi’s most exalted places.

The evening prayer has just ended. The qawwals have taken out their harmonium.

Suddenly springing to life, Billi is getting up from the marble platform, jumping down to the courtyard and making his way through the crowd.

He brushes past an embracing couple. He stops by a fakeer eating biryani from a polythene bag. He briefly sits beside a circle of boys who toss chicken bones at him. He is heading towards the Jamat Khana mosque, which was built in the dargah by one of the sons of Sultan Allaudin Khilji. Two children try patting him but he ignores them, and enters the mosque, where he keeps walking… in the direction of Mecca.

[This is the 55th portrait of Mission Delhi project]

Billi, or Cat, or Catty Neither shy, nor an extrovert Aloof in the world Till Billi do us part