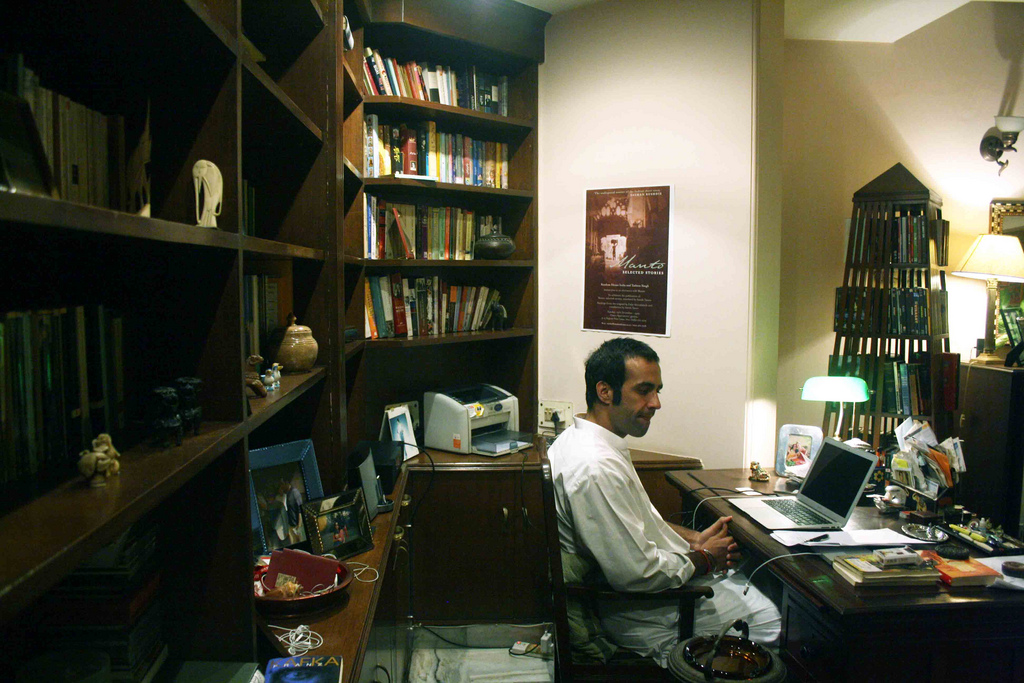 One late evening The Delhi Walla knocked at the door of Aatish Taseer, a novelist. In his 30s, Mr Taseer lives in an apartment in Rajesh Pilot Lane, a quiet neighbourhood close to Lodhi Garden in central Delhi. Hundreds of books are on display in his library.

Switching to Urdu, Mr Taseer says, “This house reels under the terror of my dictatorship. No one is allowed into my study. What if somebody tried stealing the books?”

The library contains many volumes in Urdu. “They are the letters of Ghalib. Those are mystery novels by Ibn Safi. Those are the stories of Manto.” In 2008, Mr Taseer published his English-language translation of Saadat Hasan Manto’s stories.

A publicity poster on the wall beside his writing desk says:

Random House India and Tavleen Singh
Invites you to an afternoon with Manto
To celebrate the publication of
Manto: selected stories, translated by Aatish Taseer

The aforementioned Tavleen Singh is Mr Taseer’s mother. A newspaper columnist, her framed photos are arranged at various places. Here she is posing with the young Aatish in front of Leo Tolstoy and Fyodor Dostoevsky. On another shelf, she is with her family. Now, she is again with Aatish; now, with her sister. Here, under a lamp shade, she is alone.

“At one point in early adolescence, I had stopped reading. I remember my mother saying to me at the time that books were the one thing she was willing to buy me as many of as I wanted. It was her way of getting me back into reading. And it would have been hard for her. We were living with my grandparents in Green Park at the time; my aunt was paying my school fees.”

If Mr Taseer has to get a new release everyone is talking about, he goes to The Book Shop in Jor Bagh Market. For books on Indian history, he goes to Munshiram Manoharlal Publisher in Rani Jhansi Road. He buys Sanskrit books at Motilal Banarasidass in Jawahar Nagar.

Mr Taseer, who takes Sanskrit classes twice a week, has all the 30 volumes of Clay Sanskrit Library, a series covering classical Sanskrit literature spanning two millennia. Pocked-sized, each work features the original Sanskrit text in transliterated Roman letters on the left-hand page with its English translation on the facing page.

Earlier, the Sanskrit student had learned Urdu from poet Zafar Moradabadi who lives in Galli Sooiwallan, Shahjahanabad. Mr Taseer studied French in Amherst College. While he completed Marcel Proust’s In Search of Lost Time in its English translation, he has read Madame Bovary in its French original.

The wisdom of these different languages might have created a chaos in his head, but, there is at least an attempt to bring order into the library. One shelf is stacked with writers’ biographies (Evelyn Waugh, James Joyce, Marcel Proust, Gabriel García Márquez). Another has American writers (Mark Twain, John Updike, Henry James, Gore Vidal). Russian novelists (Leo Tolstoy, Vladimir Nabokov) occupy their own rack. One shelf is dedicated to V.S. Naipaul. It includes the first edition of An Area of Darkness: A Discovery of India.

Mr Taseer opens his copy of Bogart, the first story of Miguel Street, Naipaul’s first book. The opening page is inscribed with the author’s note:

Taking out his hardbound edition of Salman Rushdie’s Shame, Mr Taseer says, “It had belonged to my mother, but I had it signed to me. My mother had done the same thing to her mother with Victor Kiernan’s translation of Faiz.”

A revolutionary Urdu poet from Pakistan, Faiz Ahmed Faiz had a nephew called Salman, a Pakistani politician who was assassinated by an Islamic extremist in 2011. Mr Taseer is his Indian son.

Directing me to his guest bedroom, Mr Taseer points to several editions of his three novels: Stranger to History : A Son’s Journey Through Islamic Lands, The Temple-Goers, and Noon. Holding his last book, he says, “I’ve been waiting to write something new for months… have made many false starts…”

Mr Taseer writes in his library. Every night he goes to sleep after drinking a glass of milk.

Sultan of his study Scenes of the shelves Other shelves, other languages