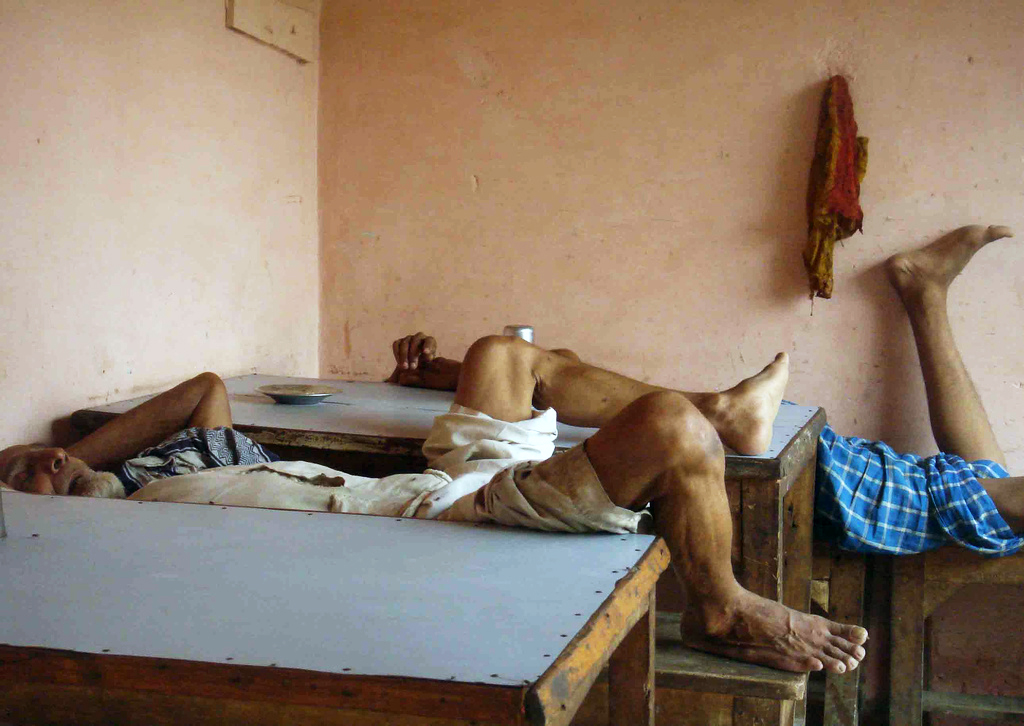 Hopelessness stifles the air. Lethargy is invasive. Life goes on in a dreary motion. Everyone moves slowly, knowing there is no future. The world is sterile. Welcome to Nasbandi Colony. Like its name, which means vasectomy, the surgical process of sterilization, there is no hope in the unborn. That has been taken away also.

Unpainted houses hint of aborted undertakings. Tattered curtains, guarding the entrances, expose the poverty inside. Bricks are layered one upon another but construction appears to have been jettisoned midway. Walls look temporary. Open drains line their fronts. Lemon wedges. Plastic bottles. Rubber slippers. Cluster of mosquitoes. And greenish-looking oily scum floats in them. Hand pumps stand adjacent to these drains. In the absence of running water, they are a vital source for malaria.

The streets are strewn with refuse. Goats and people scamper on the sides. Flies reign supreme – on buffalo meat, over-ripened mangoes, and infants in hanging baskets. Here people pine for dignity. It is just across the border from Delhi – and yet it could be from another era.

Board a rickshaw after arriving at Loni in Ghaziabad, the town across the border from East Delhi. As it rattles over bricks and boulders on an unpaved road, a painful sensation gnaws inside your stomach. Note the despondent-looking people sitting outside their brick hovels that line the way. They acclimatize you to Nasbandi Colony.

Most are Muslims. Some houses double up as factories. Junaid Alam, from Bihar’s Darbhanga, makes metallic springs. His per day output of 10 kg translates to Rs 200. Tanveer, next door, earns Rs 70 by making 4000 brass buttons daily. Their manually run machines are independent of an on-and-off power supply available six hours a day.

There is no government college. Children go to private schools or madrasas, the Islamic schools. Some, like 15-year-old Mohammed Nasir, sell Buffalo Biryani for Rs 5 per plate. Parks are unthinkable luxuries. Cricketers play in a ground in the nearby Lalbagh. Grocery stores are half-empty. An abnormally hot bakery, churning out rusks on steel trays, employs seething young men.

Nasbandi Colony’s present cannot be captured without knowing its past.

It happened more than twenty years ago. Sunhera Khatoon, the mother of three children, does not remember the year they moved from Seemapuri. Her youngest was a girl of six when Ms Khatoon went for the ‘operation’. Six months later, as promised by a government policy, she was awarded a free 50 square yard plot at Buddha Nagar, in neighboring Uttar Pradesh. Many lapped up this scheme through which the government hoped to address the population problem. Around five thousand underwent birth-control operation to gain free plots. Buddha Nagar became known as Nasbandi Colony.

“It was like a forest then,” says Ms Khatoon. “Keekars dotted the gehu and makka fields.” Not just trees disappeared. Bangladeshis lived here. Many say that they were the first to settle. According to Parveen Chowdhury, a local woman politician who has contested the block elections, Bangladeshis were gradually driven out by the authorities. Police vans would pick up entire families in surprise raids. Ms Chowdhury could not say what happened to them later. Some discreetly returned to sell their houses before disappearing again.

Meanwhile Nasbandi Colony failed to live up to its promise. Within five years of moving to the colony, Ms Khatoon’s husband died of fever. She attributes it to the filth and mosquitoes. Her rag-picker son mostly remains ill and stays home. She supports her four granddaughters by washing dishes in Lalbagh households. “Even social workers don’t come here,” says Ms Chowdhury. Her husband suffers from liver complications.

Ugliness can always be peeled down to uncover layers of beauty. Ignore the stink of Budh Bazaar, the commercial heart, and look deeper. Pavement tailors are stitching delicate embroideries on shalwars; makeshift brick ‘halls’ are screening films on DVD for Rs 5. Santosh Jewelers attracts with its claim of making 23-carat jewels to order.

Those who fear for the Indian-style secularism must visit Gulshan Public School at G Block. Almost all of its 150 students are Muslims who sit in classrooms adorned with Saraswati’s portraits. Even the insignia on their belts show the goddess’s image. The Hindu manager has not received a single complaint from Muslim parents.

The cleanest place is perhaps Bangali Masjid, the colony’s most prominent landmark. Its courtyard, strewn with neem leaves, hums with the cries of children reciting the Quran. Its walls are painted; its minaret decked with white-and-blue tiles. The Bangladeshis built the mosque. This is their heritage.

One of the few Bangladeshis left here, he does not want his name to be disclosed. He crossed into India at 18. Although having a voter ID-card, he lives in fear of being picked up by the police. “I don’t remember Bangladesh,” he says. “My wife is from West Bengal and my children were born here. This is my country.”

Another world is a reality