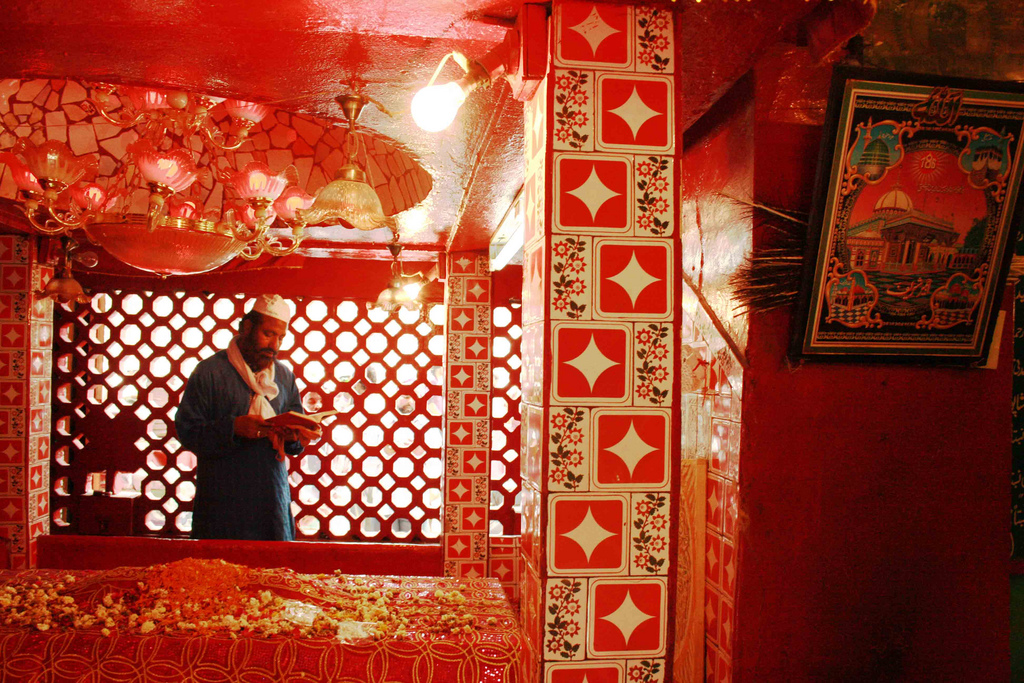 Outside: a confusion of shoppers, beggars, biryani stalls and goats. Inside: stillness.

Sandwiched between the imposing Jama Masjid and the chaotic Meena Bazaar, the Sufi shrine of Hazrat Sarmad Shaheed in Old Delhi boasts of no dome or marble. The cramped courtyard gets its homely character from a giant neem tree and a Mughal-era well. The dargah is flanked by Imran’s chai shack, the Sonic CD store, Raza Bookshop, the Qutubkhana Sarmadi stall that sells pamphlets, perfumes and amulets, the one-room office of Al Makkah Tours & Travels, and Rahat Open Surgery, an open-air clinic where a hakeem claims to cure diseases like cancer and diabetes by bloodletting.

Although Sarmad’s tiny tomb does not receive as many devotees and visitors as Delhi’s famed Sufi centres of Hazrat Nizamuddin Auliya and Khwaja Qutubuddin Bakhtiar Kaki, it is very special, and not just because Sarmad was a mystic, a poet and — by birth — an Armenian Jew from Persia.

Sarmad was executed on the orders of Mughal emperor Aurangzeb — in 1660. In 1910, a young Maulana Abul Kalam Azad, who would go on to become a leading freedom fighter, wrote an essay on Sarmad — a piece of writing in which many scholars trace the origins of Azad’s religious thought and political life. In 1950, an English translation of Sarmad’s Rubaiyat was published at Rabindranath Tagore’s Santiniketan in West Bengal. In 2001, a book by Ruth Vanita and Saleem Kidwai devoted an entire chapter to Sarmad. That book was Same-Sex Love in India: A Literary History.

In it, Kidwai wrote: “Sarmad was born a Jew in Kashan (in modern-day Iran), around 1590. He became a trader and acquired knowledge of mystic traditions and of Arabic and Persian poetry. Before he arrived in the port city of Thatta (in modern-day Sindh) in 1632, he had converted to Islam. In Thatta he met a Hindu boy named Abhai Chand. The attraction was mutual and soon after meeting him, Sarmad abandoned his trade and became a naked fakir.”

It is in this state that Sarmad appears on the cover of a slim hard-bound volume sold at a stall outside his shrine.

The Hindi-language biography shows a skinny, unclothed man sitting against the backdrop of Jama Masjid. Wearing a beatific smile, one of his arms is raised, as if in defiance, towards the extravagantly dressed Aurangzeb, who is scowling down at Sarmad. According to historians, the infamously intolerant emperor hated this seemingly harmless ascetic, who had eventually settled in Delhi, because of the latter’s nudity, his stubbornness in reciting only the first half of Kalimah — the Muslim declaration of faith — and his proximity to the original heir-apparent Dara Shikoh, Aurangzeb’s elder brother, who was eliminated by Aurangzeb during the struggle for succession.

In his book The Peacock Throne: The Drama of Mogul India, American historian Waldemar Hansen refers to Sarmad “as one of those profoundly disturbing mystics whom only the East could produce and perhaps only India could tolerate”.

Describing his decapitation in front of Jama Masjid, Hansen noted, “It would be a spectacular execution scene for the Sufi martyr of Delhi: not strangling or beheading in a dark cell but death in public, in the blaze of noon, as a warning to anyone who dared to go against the state-cum-religion.”

Legend has it that Sarmad was reciting beautiful extempore verses as the sword sliced off his head. The Sufi poet picked up his head, walked up the mosque stairs, performed his final prayers and departed to heaven.

The blood-red tiles of his shrine are a testimony to this bloody end.

Actually, the dargah is home to two Sufi saints: Sarmad Shaheed and Hazrat Hare Bhare Shah, a contemporary of Aurangzeb’s father Shah Jahan. Hare Bhare Shah’s tomb, indicative of his name, is made of green tiles. The entire shrine is halved into these two colours — even the doorway gets its colours from this scheme.

The quietude permeates every corner of the dargah. The noise of people bargaining, singing, spitting, yelling and cursing on the street stands in stark contrast to the soothing hum inside the shrine. The three cobwebbed chandeliers cast a dim orange light on the red and green carpets; daylight enters slyly through concrete jaalis (latticed walls). A red side wall has Sarmad’s Persian verses painted in Devanagari. All day long, people stream in, in twos and threes. Some write wishes on chits of papers and place them respectfully on Sarmad’s tomb; some offer roses, marigolds and sweetmeats; some sit and pray silently; some cry softly without inhibition; a few even take a nap.

There are both Muslims and Hindus among these pilgrims. During several visits to the shrine, The Delhi Walla has chatted with a number of devotees and most had no clue about Sarmad’s life except that he was a saint who makes wishes come true. One evening, I met a sobbing Hindu woman dressed for a wedding reception — she had stopped by to pray for her son, who had gone into depression after being jilted by a girlfriend.

Sarmad’s unconventional life is reflected in the lives of at least some of the people residing in the vicinity. A few steps away is the pavement home of several elderly hijras (eunuchs), headed by their guru Munna. It’s a makeshift shed but they have been living here for years. Every morning, they read Urdu-language dailies over glasses of creamy chai. Their home compensates for its lack of walls and doors with a stately-looking bed, a wooden cupboard and a row of potted plants. Unless they feel that you are there only to stare at them, they let you join in their discussions, the subjects ranging from pashmina shawls to the West Asian crisis to Sufi mystics. While most of the hijras here have retired from active work, one of them runs a chicken biryani stall near the Jama Masjid steps.

One cold morning at their lean-to, I met a visiting fakir from south Delhi’s Mehrauli. Looking charismatic in his ankle-length white beard, the black-robed Bahar Ali Shah said: “It is not easy to understand the life of a fakir. The devotion that existed between Sarmad and Abhai Chand was not about the love you see around you; it was the love between a father and son.”

In his classic Urdu essay Sarmad Shaheed, Azad, whose garden-tomb was built within eye-shot distance of Sarmad’s dargah, wrote: “Thatta was Sarmad’s Mount Sinai… it was a Hindu boy whose divine glance cast a spell over Sarmad. That it happened, is no wonder! When a heart is vulnerable to love, the darner’s needle acts as efficaciously as the executioner’s axe in slicing it down the middle… It seems that the simple Iranian trader, with an intensely lonely heart, was desperately looking for a buyer. When he felt the thrill of discovering one, he did not bother to find out who he was and what he offered in exchange. That a precious commodity (his heart) was desired by a pair of magical eyes, was enough reason for celebration. The deal was clinched.”

On the day of Sarmad’s death, the naked Sufi was made to walk from the Red Fort to Jama Masjid. Guarded by armed soldiers, he was surrounded by hundreds of spectators. Hansen wrote, “… somewhere in that sea of faces was Abhai Chand, Sarmad’s beloved Hindu boy, the catalyst of his rapture, sainthood, and doom.”