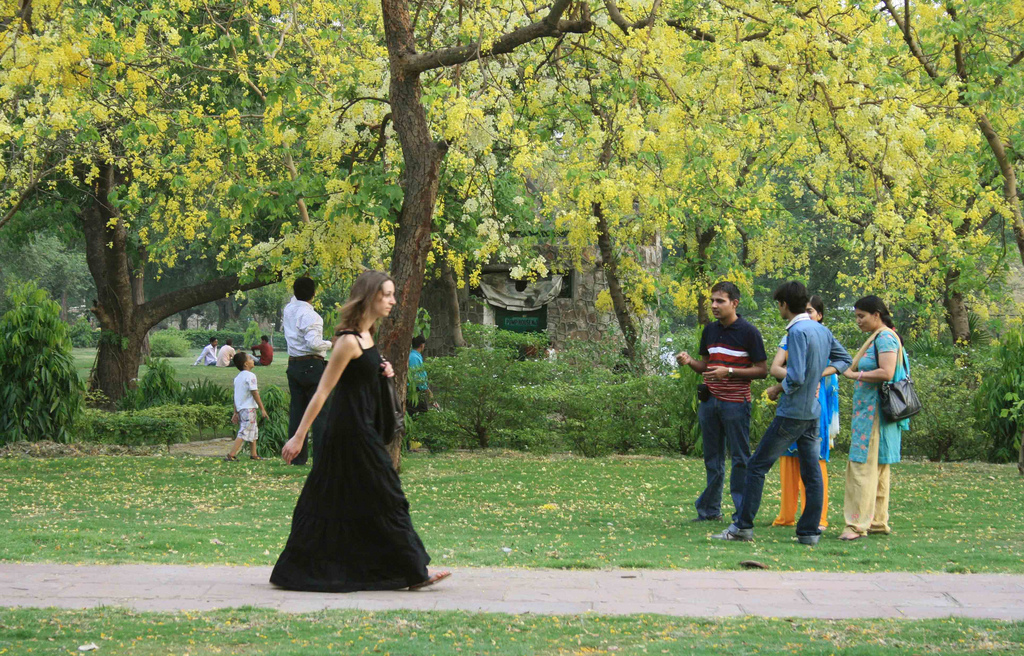 The cool of the heat.

Delhi’s agonizing summer is made bearable by the blossoming of the amaltas. Although the tree’s yellow flowers herald the season’s brutality, their glittering bloom provides consolation.

This year, for some reason, the amaltas-lined Hailey Road near Connaught Place has failed to put up a grand show. Unlike previous years, the yellow is present only in patches.

But the dozens of amaltas trees in the little park outside the ticket window at Humayun’s Tomb are shining as brightly as they always do. The branches are sheathed in yellow and the flowers fall all day long, covering the grassy ground with their petals — yet the trees never run short of flowers. The view is so arresting that one wonders how the people in this park — mostly cricket-playing boys — are oblivious to the flaming yellows.

“Nature plays a visual sequence of colours in summer,” says photographer Raghu Rai, whose apartment in south Delhi’s Mehrauli does not look out to any amaltas, though his farmhouse on the city’s outskirts has an entire row of these trees. “First come the purple flowers of the jacaranda. They are followed by the red of the gulmohar. And then arrives the yellow and golden amaltas. These flowers sprout from under the armpits of every branch; their colour is so gentle that the heat becomes transparent and so it doesn’t hurt you so much. The flowers hang down in bunches above you like nature’s blessings… Otherwise there is no heaven waiting for us in this heat.”

In his 2006 book Trees Of Delhi: A Field Guide, environmentalist Pradip Krishen recommends to see these “drooping sprays of bright-yellow flowers” in the central Delhi avenues of Amrita Shergil Marg, Shanti Path and Akbar Road, and also at Shakti Sthal, the late prime minister Indira Gandhi’s memorial. Probably not many people know that the giant amaltas at Teen Murti Bhavan, where Mrs Gandhi lived with her father, Jawaharlal Nehru, was planted by her younger son Sanjay. It was under this tree that her ashes, and later those of her elder son, Rajiv, were placed to allow people to pay their respects.

In his book Sex, Scotch And Scholarship, author Khushwant Singh, who died in the early days of summer, wrote: “The laburnum (Cassia fistula) or amaltas has become a great favourite of Delhiwallas as the gulmohar for the simple reason that both are quick growing and colourful. Of the two, the laburnum makes a more spectacular entry. It first sheds its leaves; by the second fortnight of April, only the long, brown-black tubular (hence ‘fistula’) fruit can be seen hanging from its bare branches. Then suddenly blossoms appear in clusters like bunches of golden grapes. The beauty of the Indian laburnum defies description. No poet or writer has ventured to put it to paper. Only painters have been able to do it justice. Alas! Its glory has a very short lease — less than a fortnight — after which its leaves take over.”

On a recent Sunday, Manika Dhama, content manager for an e-commerce website, was on her way to the weekly book market in Daryaganj when she noticed the trees lining the road near the ITO crossing. “More than once I exclaimed at the wonderful surprise of the amaltas flowers hanging down from their branches,” she says. “And there they were again, circling the boundary of the sector in Noida (Uttar Pradesh) where my parents stay. The harsh sun may not be the easiest to bear but the eyes have much to look forward to during the Delhi summer.”

Ms Dhama, who has no amalatas tree around her office or home, adds, “While driving around the city at this time of year your eyes are soothed by the greenery lining the roads as the sun beats down hard. And then suddenly there’s a pop of colour on that canvas, brought on by the bright yellow of the amaltas in full bloom.”

In his book, Mr Krishen warned that the amaltas is in “danger of becoming so common that we stop noticing it”. Indeed, most of us who live in big cities are stressed by so many disquiets and distractions that the truly beautiful elements of nature pass us by without making any impact.

However, a young poet from Bihar, Neyaz Akhtar, is different.

Mr Akhtar, who has been staying for the past few months at a hotel in congested Old Delhi, shares his experience of discovering an amaltas in the Capital: “It was my first day in Delhi, a city I did not like much. The sun was scorching hot. I was bathed in sweat. Everything seemed to be a terrifying chaos. After hours of wandering, I took refuge under the shade of a tree and it was then I noticed right in front of me, across the road, a dog sleeping in peace on the pavement that seemed to be carpeted with eye-soothing gold. I looked up and found thousands and thousands of bright yellow flowers drooping down from the branches. I looked around and saw a few more such trees, all standing proudly, firmly, confidently, like hope amid the gloom.”