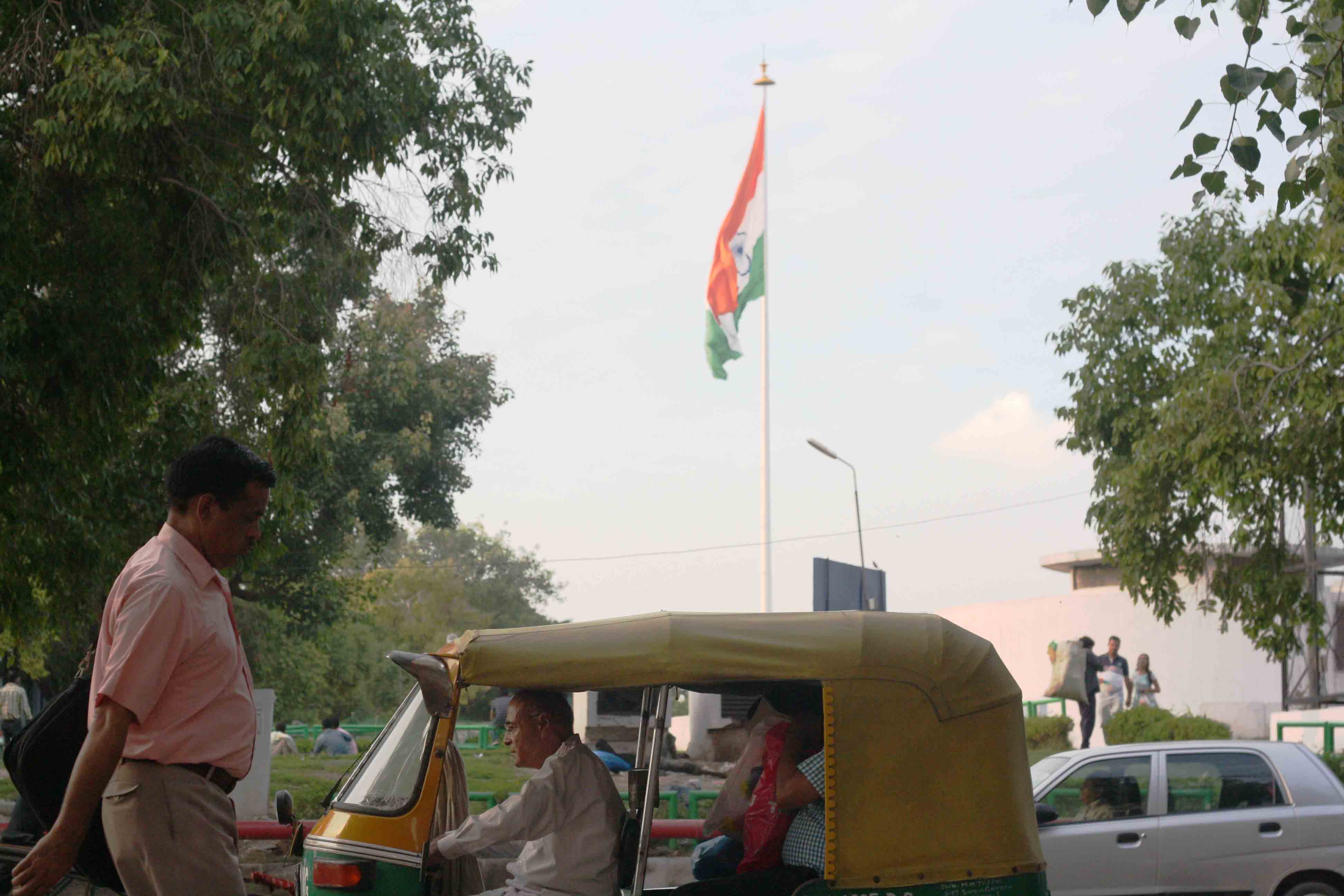 The largest in India, this national flag is larger than a badminton court. You can spot it from Kasturba Gandhi Marg, or from the samosa stand outside The Embassy restaurant, or even from inside the display window of Wenger’s pastry shop in Connaught Place (CP).

The best front view is from Janpath.

But perhaps you have already seen it on Facebook — in your friend’s selfie.

Stitched by five tailors in east Delhi’s Jagriti Enclave, the tricolour in Central Park soars over the white arcades of colonial-era CP. In July 2014, the caretakers of the “monumental flag” resolved a tiff on the maintenance expenses, amounting to 60,000 rupees monthly. We will pay, the privately run Flag Foundation of India (FFI) told the New Delhi Municipal Council, which owns the park land.

Set up in March by these two organizations, a 207ft-tall steel pole supports a 60x90ft fabric of polyester silk that weighs 35kg. It is turning out to be CP’s most photographed landmark.

“The Central Park flag is becoming like a monument,” says K.V. Singh, the CEO of FFI. At his tiranga-filled office in south Delhi’s gleaming Jindal Centre, he says: “Recently somebody scribbled ‘I love Geeta’ on the flagpole. Thankfully it was in ink and we wiped it off with a dimmer.”

The breeze of a fair-weather day makes the flag flutter smoothly, the metallic cable clattering against the pole. Shoppers capture the scenes on their smartphones, probably unaware that the fluttering of the cloth results in repeated wear and tear — it takes tailors about 6 hours to repair a torn flag; one-time repair costs 3,000 rupees. While a new flag costs 65,000 rupees, it can be given facelifts three times a month depending on the wind velocity in that period.

“Once a flag is beyond repair,” says Mr Singh, “then, according to the law, it has to be burned away from the public gaze. So far we have disposed of four flags.”

On the evening of 29 May, a thunderstorm hit Delhi. The morning after, Gurgaon-based Twitter user SoccerMom shared a photo of a flagless pole, saying, “Shit! Seems the giant tri-color at CP has gone invisible/been lowered/flew off.” Two days later, Chennai-based Srini tweeted, “The massive Indian flag at Connaught Place is back fluttering in glory…”

The first public place in New Delhi to be gifted a tricolour following independence was Princess Park — in July, the Union finance minister announced that this garden near India Gate would be the setting for a national war memorial.

It is at India Gate that the Indian Navy band performs for the public as part of the Navy Week celebrations every winter. This year, according to Mr Singh, the performance will be staged under the national flag in Central Park. “The navy has confirmed,” he says, adding, “We are also approaching other army establishments in the Capital so that each month we have a band in the park. Our aim is to spread love for the flag and honour for the country.”

On a scorching afternoon recently in CP, the gently undulating stripes of saffron, white and green stirred different feelings in different people. The collective sentiment of patriotism was tempered by local colours, giving us a fleeting picture of the Central Park and its surroundings.

Sitting idle under a peepal tree in N-block, Mr Vikas, who uses only one name, says: “I feel nothing on seeing the tiranga.” With his back to the flag, the 25-year-old says, “Why should I feel proud? There is nothing for me right now.”

The eldest of three brothers, Mr Vikas used to support his widowed mother until he resigned from a badly paid sales job in April. Since then he has been unable to find work. “I was getting 8,000 rupees at the most. That is nothing. Thankfully my brother has got something in Vodafone.” Turning towards the flag, he stares at it for a few moments before saying: “I’m not satisfied with its height. It should have been taller.”

Bookseller Radha Krishen Galgotia, of B-block’s famous landmark ED Galgotia & Sons, remembers being taken aback when he first saw the flag. “It was just any other morning. I was stepping out of the Rajiv Chowk Metro station when I saw it fluttering in the wind. Isn’t it so huge? My three staffers, too, were talking of it. The same evening, on returning home to Gurgaon, I told my family about it.”

Three months old now, the tricolour has grown to be a part of CP’s sparse skyline. To regulars in the area such as Mr Galgotia, it has started looking as commonplace as Statesman House on Barakhamba Road, or the State Trading Corporation building on Tolstoy Marg.

“It is now my store that is looking uncommon,” he says half-jokingly, waving at the almost empty shelves. Speaking about the bookshop, established in 1933, Mr Galgotia says, “We are not closing for now but I may not hold on to it by next year… it’s the e-commerce and (the decline of) Connaught Place… ”

In the garden above the Palika Bazar parking, which lies just across the road from Central Park, Ms Muskan, a middle-aged hijra (eunuch) who uses only one name, is applying brown lipstick to her lips. It is hot and no one else is around. Looking towards the flag, she says: “I see it even from Hanuman Mandir, where I sleep on the patri (footpath). Every day people come here and excitedly point it out to their friends. They look very happy.”

After rubbing some fairness cream on her face, Ms Muskan gets up to leave for Janpath, where she begs outside the McDonald’s outlet.

Once, the Central Park was a sanctuary for hijras such as Ms Muskan, homosexuals and prostitutes. In 2001, the Delhi Metro Rail Corp. took over the park to build an underground rail terminus and reopened it 5 years later as a renovated garden, complete with fountains, pools and an amphitheatre. The former denizens of Central Park migrated to the park above Palika Bazar. In the evening, indifferent to the flag, boys and men cruise for love there, while hijras stop by heterosexual couples lounging on the grass, insistent on bartering blessings for a few rupees.

When his attention is drawn to the smooth-flowing tricolour, Mr Ranbeer, a shoeshine boy in Connaught Place’s Inner Circle who claims to be 14 but looks much younger, says: “Everyone takes its photo. I don’t know what it is.”