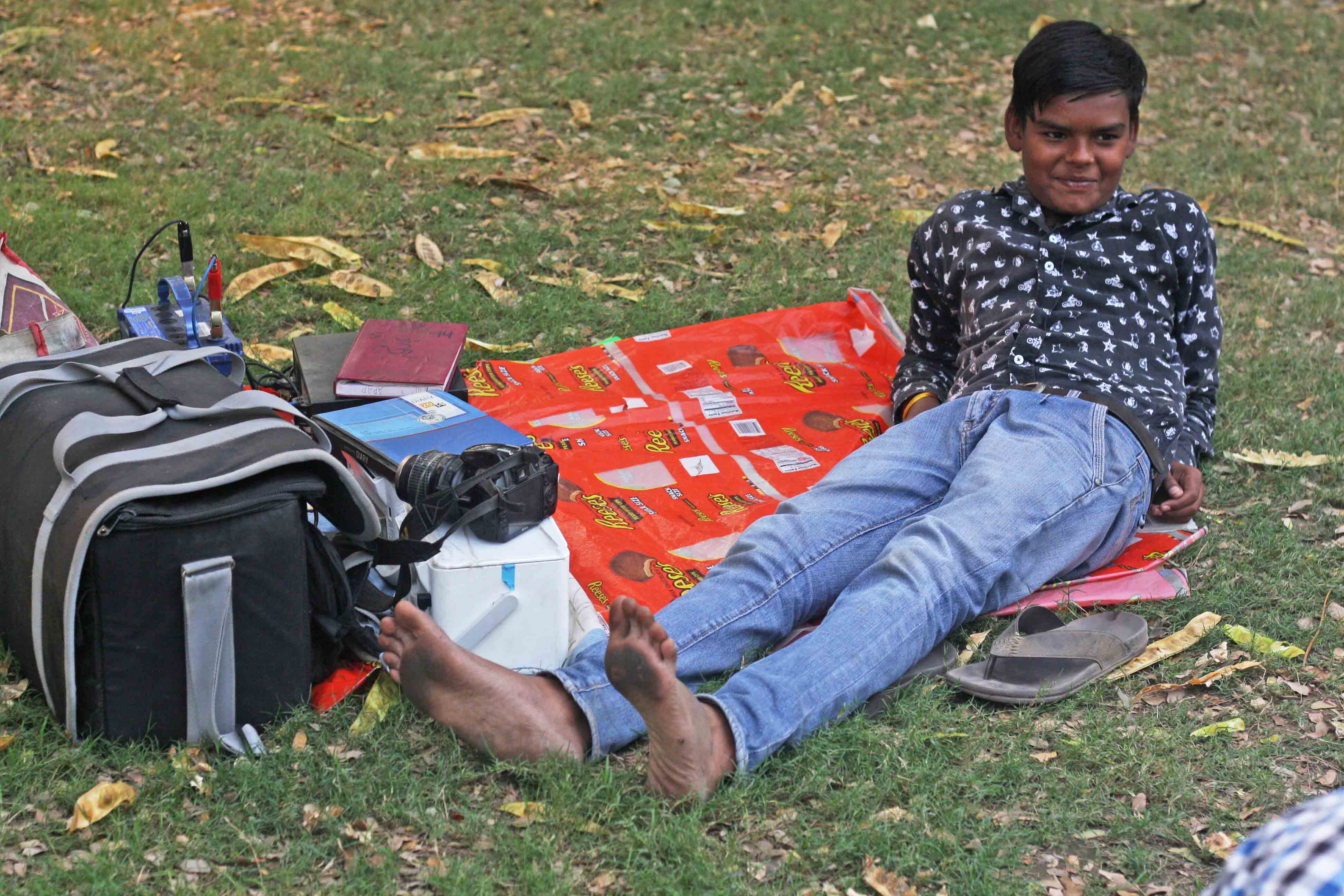 It’s a lovely afternoon. India Gate gleams even in New Delhi’s winter haze. A boy with a hint of a stubble is lying lazily under a tree’s scented shade. His white vendor’s box stands next to him, waiting for the next customer.

A man approaches the boy, hurriedly taking out a chip from his camera. The boy gets up and opens the box. Inside, there’s not the usual popcorn or churmure that is peddled non-stop around this monument, but a printer. The camera chip is inserted into the printer’s drive. A picture slides out fitfully from the machine.

Yet another India Gate photograph — this time it’s of a couple hugging against the backdrop of the Capital’s most recognized landmark.

A walk across the India Gate grounds reveals dozens of boys sitting beside their battery-powered Epson photo printers. And there are an even greater numbers of photographers hunting for customers — like their unionized counterparts at Bombay’s Gateway of India.

This congregation of photographers is unique also because the city’s other tourist landmarks usually don’t have this tradition. “Unlike, say, Agra, Delhi never had commercial photographers hounding visitors in touristy places,” says the veteran government-approved tourist guide Satish Kumar Goswami.

Mr Goswami says on phone that Delhi, in fact, had only one such photographer. That lone person was stationed at the Gandhi samadhi at Rajghat during the 1960s and 1970s; he used to charge 5 rupees for an image — the account of this unnamed photographer was corroborated by another long-serving guide.

The photographers at India Gate lack the passion of our camera-enthusiast Facebook friends. They also have no claim on their cameras. These digital SLRs are the property of their maaliks, or bosses, who own the printers too. The cameramen (and “printer boys”) merely get a cut of the daily earnings.

Each of these photographers has a survivor’s tale to tell, but don’t expect stories of how they grew up worshipping Henri Cartier-Bresson or Raghu Rai. They are simply among the thousands of migrants who end up in the Capital every year as rickshaw-pullers or paratha cooks — or India Gate photographers.

Kishen Yadav, hair perfectly combed, is in his late 20s. He left his hometown Kolkata a decade ago, sweated it out as an “electroplating worker” in Chennai, and arrived in New Delhi two years ago. Chance turned him into a lensman.

The teenage Irfan Ali, who looks like singer Justin Bieber, was given a camera after he slaved for a few months at his maalik’s printer. A Delhi boy, he dropped out of school to support his family when his father, a daily-wage labourer, fell ill. Mr Ali hasn’t attended photography workshops but he says that the daily clicking has been training enough.

All that a photographer like him has to do is learn how to capture the two standard India Gate moments. “The ‘Touch India Gate’ pose makes you look as if you are touching its top,” says Mr Ali. “And the ‘My India Gate’ pose has your arms pointing towards the monument.”

This is what the “public” likes.

Most customers, Mr Yadav says, are group tourists from the south. The photos, handed to them within minutes, cost the happy visitors 30 rupees each. Foreigners, armed with iPads, rarely avail of the services.

And rarely does any visitor spend time vendor-watching, which is more fun than looking up at the World War I memorial that now commemorates the Unknown Soldier.

The afternoon scenes rival the serenity of nature poems. The number of visitors thins at this hour. The vendors lie down on the grass. Squirrels run up the tree trunks. The traffic sounds seem remote.

Bablu Gupta, who arrived in the Capital in 1995, claims to be the first photographer to have set up the business on these grounds. It was a time when “there were Campa Cola stalls around India Gate”, says Mr Gupta, who started as a photographer on a tourist bus. Lounging by a pond near India Gate, he says, “In the early 1990s, the Polaroid company gave me a dozen cameras for free, asking me to start work here.” Mr Gupta immediately hired a few men. It was the beginning of the photographers’ tribe that roams these sprawling grounds today.

Mr Gupta, now in his 40s but still childlike, is there every day. He says there are 400 photographers at India Gate, and many frequently juggle vending options, their versatile hands as skilled with a camera as with dal-chaat.

With 10 photographers on his payroll, Mr Gupta is among the 40 maaliks operating in the vicinity. For the vendors, he is Mowgli, the hero of Rudyard Kipling’s Jungle Book stories, whose fan following multiplied after some of the photographers heard about the TV series adaptation.

One of the maaliks is the area’s earliest vendor. Now in his 60s, Ram Bhol arrived at India Gate in 1982. “I began as a cotton-candy man,” he says. “Then I sold balloons. Then, cold drinks… time kept running… I became a photo maalik.”

Mr Bhol and his wife, who stay in east Delhi’s Trilokpuri, arrive each morning at 8 in an autorickshaw. His establishment consists of two printers and three cameramen. Like other maaliks, he has no fixed address. He moves through the day from one point to another, seeking shade in summer and sunshine in winter.

The maaliks and photographers leave by 8pm; the ice-cream vendors remain beyond midnight.

One day, soon enough, these photographers might become extinct.

“My daily income has halved in two years,” says Mr Yadav. “More and more tourists come with cameras as good as ours. There is no future in photographery (sic) now. I must look for something else.”

The lensman could pick up a tea kettle. The winter is here. Steaming hot chai will get customers.

The Cartier-Bressons of India Gate