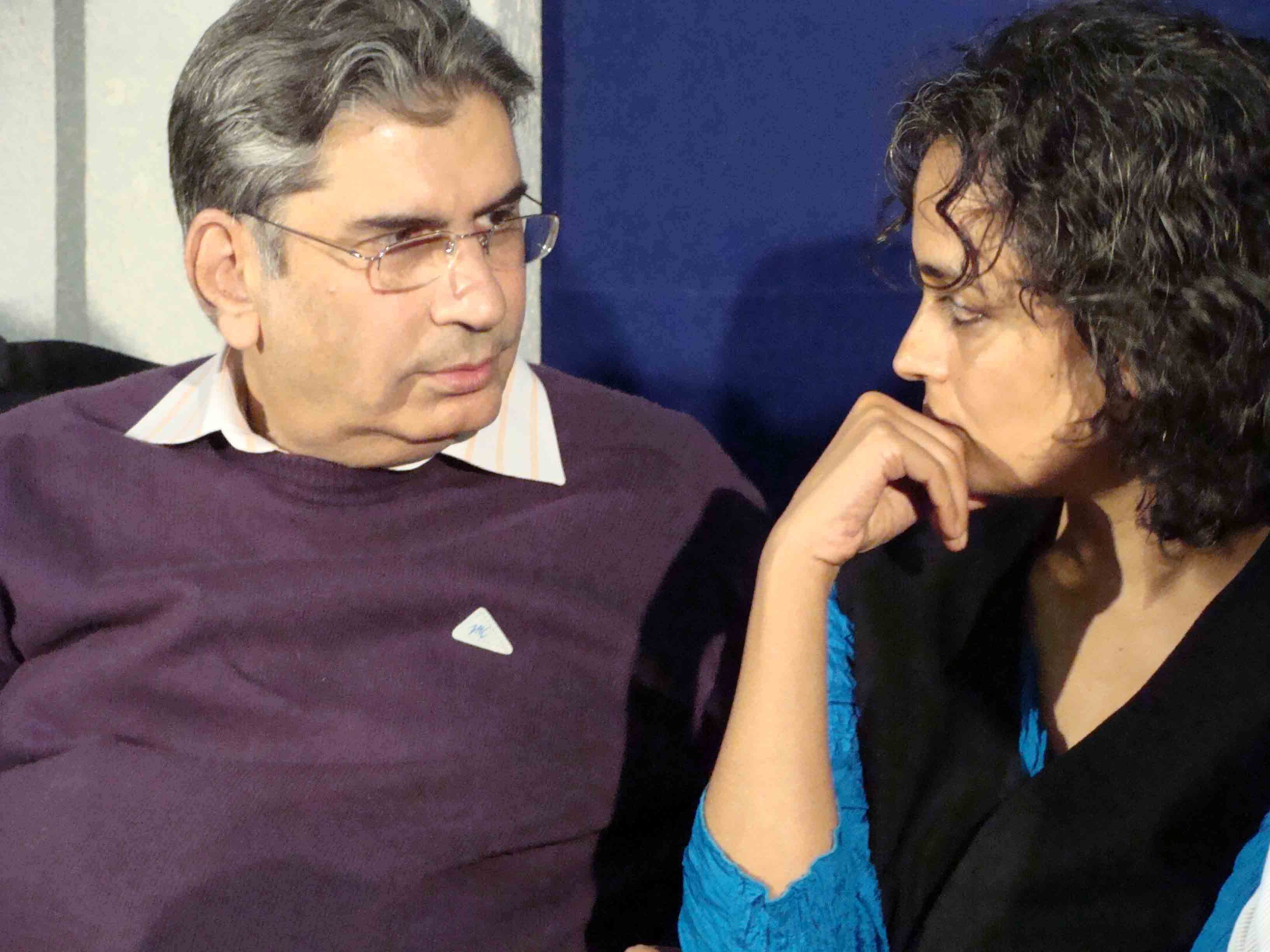 Mr Mehta was one of the most famous (and respected) editors in India. He is survived by his secretary of many years, Sasidharan K, wife, Sumita, and dog, Editor. The Delhi Walla had written about this second Editor in 2011. I wrote:

As the editor of Outlook, an influential Indian newsweekly, Mr Mehta often puts in a nugget or two on Editor in Delhi Diary, the popular column on the magazine’s last page. That explains the exposure of a family secret — all three (including Mr Mehta’s wife) share the same bedroom. Editor snores on the sofa; the Mehtas on the double bed. However, unlike other pampered Nizamuddin East pets, Editor is not pedigreed. Around seven years ago, he was found shivering in a ditch in Gurgaon.

I also happen to be one of the last persons to interview Mr Mehta before he fell ill. I met him in October last year. A delicious gossip-monger, Mr Mehta told me many secrets but I cannot tell you all. This is the censored version of that interview:

Three years after publishing his autobiography, Lucknow Boy: A Memoir, journalist Vinod Mehta is set to release its sequel, Editor Unplugged: Media, Magnates, Netas and Me. Founding editor-in-chief of Outlook magazine, Mr Mehta, 72, was promoted in 2012 to the largely ceremonial post of Outlook Group’s editorial chairman, a less busy position that allowed him to devote time to writing. Often described as a veteran journalist, he is known for his irreverent views. He spoke at his sun-filled office in south Delhi’s Safdarjang Enclave.

Should some famous people be scared about your forthcoming tell-all? Have you devoted entire chapters to them?

No, not chapters, but (among other things in the book) I have picked six people whom I admire. They figure in portraits of 1,200 words each. They are Khwaja Ahmad Abbas, Johnny Walker, Sachin Tendulkar, Ruskin Bond, Khushwant Singh and Arundhati Roy.

You have published author Arundhati Roy numerous times on your magazine’s cover. What’s your relationship with her?

My conversation with Arundhati always goes like this: I’d get a call from her. I’d say, “Arundhati”. She’d say, “Hi Vinod, hi. I might have something for you.” I would ask, “How long?” She would reply, “10,000 words”. I’d tell the chief sub to get ready for 12,000 words because she always over-wrote. That would be our conversation. She is a very, very singular person. She lives absolutely alone. Her flat in Jor Bagh is full of books. She has many men friends. She married (filmmaker and environmentalist) Pradip Krishen, but I think she likes her independence a great deal. And you know she is not as abstemious as you would imagine. I took her once for lunch at the IIC (India International Centre) and she ordered roast lamb and mint sauce… and she likes white wine. She is very conscious of her looks, but this doesn’t in any way conflict with whatever she has been doing. Whenever I meet her, she is either coming from Dantewada (Chhattisgarh), or she is going to some place in Odisha, or she is going to Narmada, or she is going to New York. The world is her oyster. She is peripatetic. She is a very serious person, but she is not solemn. She enjoys life.

You light candles in Wagah to promote friendship with Pakistan, you have lunches with Arundhati Roy, and you are a regular guest in the TV news debates of Arnab Goswami, who holds contrasting views on both Pakistan and Roy.

I don’t appear on Arnab’s Pakistan debates. I always refuse because my position is hundred per cent opposite to his.

What is your relationship with Mr Goswami?

He is not a personal friend. We have a professional relationship. I respect him for his success. But I have never been to his house. He has never been to mine. We don’t talk on the phone for months. The people he likes or dislikes are not necessarily the people I like and dislike… He did not let me speak on a debate on (the rape accusations against journalist) Tarun Tejpal. I was speaking in the programme from my drawing room and Tarun sent me an SMS just 10 minutes before the programme began. (Mr Tejpal worked under Mr Mehta in Outlook. The latter is referring to the early days of the scandal when the former was yet to be arrested by Goa Police on charges of sexually assaulting a colleague.) As the programme started, Tarun arrived in my house. I told my wife to take him to my study. So… he was watching the show in the study, sending me little slips to ask him (Mr Goswami) this and that. My wife was bringing the slips from the study. At one point in the programme I said I’d like to read an SMS that I’ve got from Tarun and I read about five or seven words before I was shouted down because they said it was character assassination. I was quite pissed off. The story was so hot at that point. I would have thought that just for the news value I had an exclusive. I was the only person with that SMS.

How is your current relationship with Mr Tejpal?
Oh yes, Tarun is still my friend. He’s in the book. I have mentioned this episode, and I have also mentioned that I was largely unaware of his Dr Jekyll and Mr Hyde personalities. I only knew the nice Dr Jekyll.

Your new book is about your years with Outlook?

No, some portions are about the magazine. There’s one chapter on Ratan Tata. Outlook had problems with him. He filed a court case following our cover story on Radia tapes (controversy). There’s a chapter on Narendra Modi and a long one on the Nehru-Gandhi dynasty.

I once met Rahul Gandhi at a party at BJD (Biju Janata Dal) MP Jay Panda’s house. He was drinking Club Soda. When I told him to have some wine, he said so emphatically, “I don’t drink.” He repeated to make sure that I heard it. On another occasion, about a year ago, I found him sitting next to me. He asked me about work. I told him the famous saying that journalists, like harlots, enjoy power without responsibility, explaining my new position in the magazine. It was a little joke but he immediately pounced on that and said there’s no such thing like power without responsibility.

Do you have any equation with Prime Minister Narendra Modi?

Mr Modi and I have a very strange relationship, if I can call it that. There’s a defamation case against me in Ahmedabad that he had instituted about 10 years ago (as Gujarat’s chief minister) and it is still alive. It concerned a minister in his then cabinet called Haren Pandya, who was murdered… You see Mr Modi doesn’t interact with anybody. He has no social life, no kitchen cabinet. There’s a coterie of journalists who are very sympathetic to him, but they all are very upset at the moment because they haven’t been rewarded.

Who are these journalists?

I can go so far as to tell you that one of these journalists was desperately trying to become the Indian high commissioner in Britain. Mr Modi’s staunch defender, he is a very sober, moderate sort of a person, but on Modi, if you know from TV debates, he goes berserk and loses all sense of proportion. There’s another editor who had done Mr Modi’s party a great service and who runs a newspaper, but he is suddenly out of favour. He is feeling very bad. His close buddies tell me that there’s nothing he could do. Mr Modi either likes you or he doesn’t like you. There’s no convincing him to change his view. Once he doesn’t like you, you are finished.

Some people say that your magazine’s owner kicked you upstairs to the new post.

There may be some truth. The fallout of the Radia tapes (cover story) cost us in terms of ads from companies. Any proprietor would be worried by that. I had been editing the magazine for 17 years when the owner suggested the new position. I jumped at the offer. My wife had also been telling me that I was not doing anything, just slogging. I was not writing, just looking at pages and getting the designs supervised. I was ready to move on.

I reach the office at about 12.30pm. I then read the papers, look at emails, talk to reporters informally, and discuss some gossip-shossip. My foreign papers arrive after lunch… Guardian, Daily Telegraph and London Times. By 4, I’m ready to leave for home.

Vinod Mehta with dogs and (below) Arundhati Roy