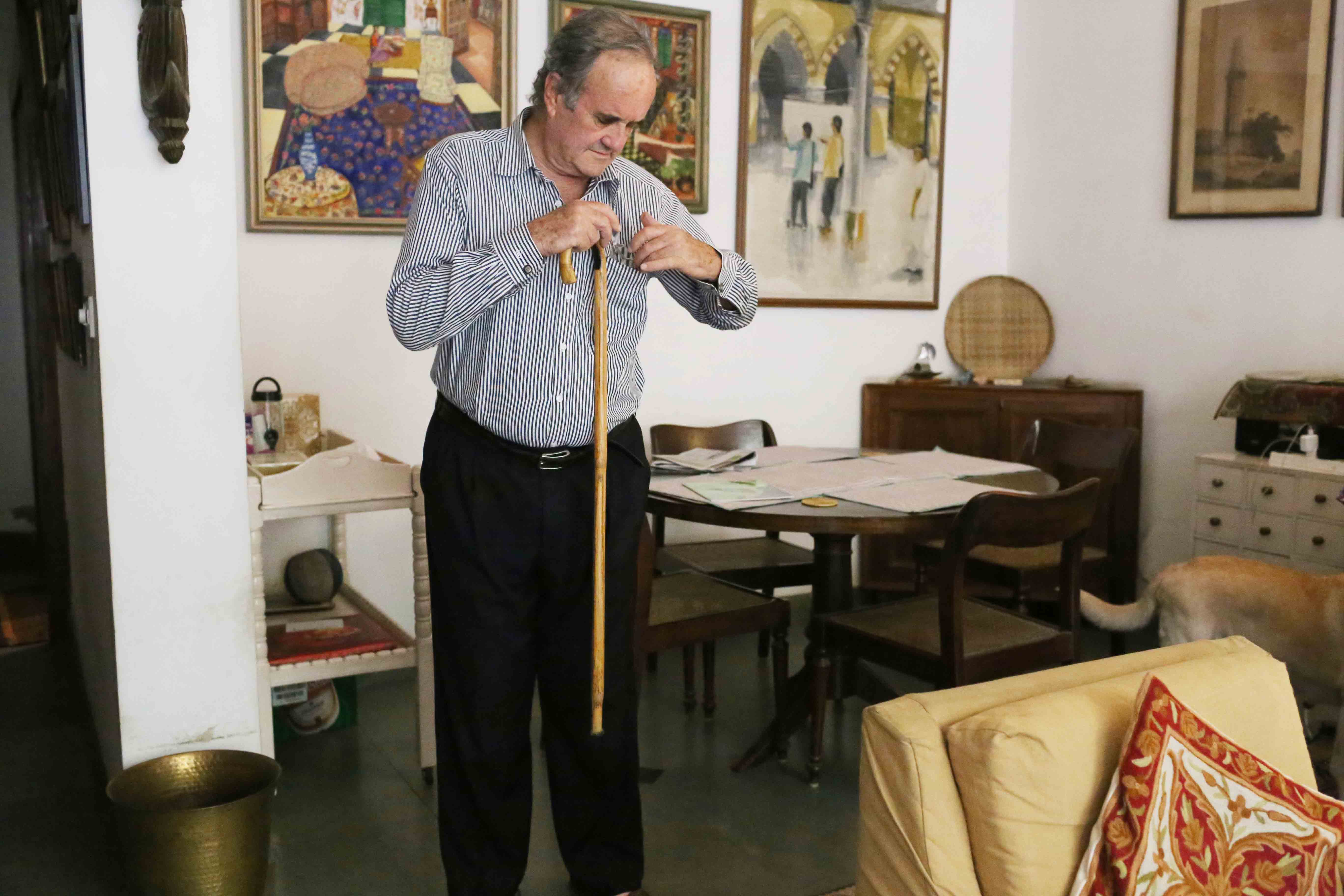 The Biographical Dictionary of Delhi – Mark Tully, b. Calcutta, 1935

November 27, 2015 · by The Delhi Walla · in Biographical Dictionary 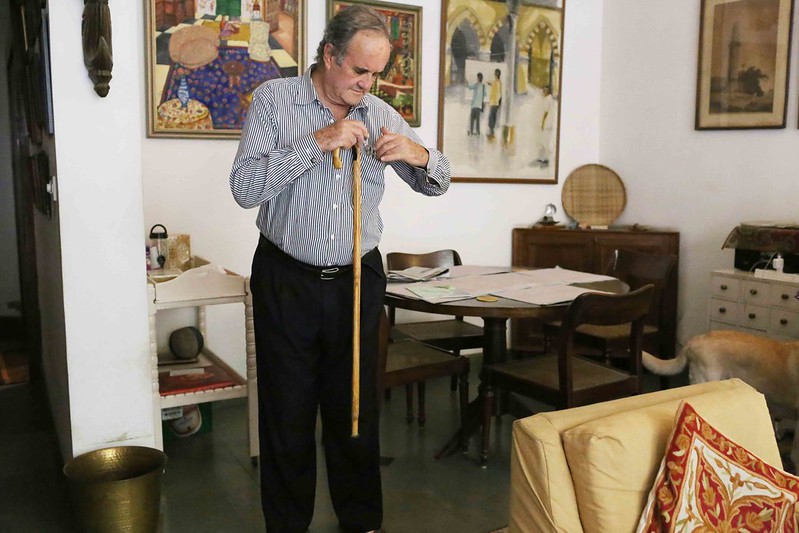 It is noon, yet the drawing room is washed in a cool darkness. The gentleman is seated on a sofa. The November sunlight pierces the window and falls on his face. He is alone, except for a sleepy Labrador lounging on the floor beside him. His partner is out on an errand. The bookshelf is lined with “Happy Birthday” cards. One of them says, “The National Old Farts Club Welcomes Its Newest Member!”

The card is addressed to the man on the sofa, who turned 80 in October—Mark Tully, or Sir Mark (he was knighted when he was 67).

Mr Tully is synonymous with British broadcasting for Indians. More than two decades after he became a freelancer, he is still remembered as, “Oh, the man from BBC (British Broadcasting Corporation)”.

Though Mr Tully is the pukka Englishman for most Indians, having served as the voice of the Beeb for decades, he is also a longtime Delhi resident who shares the misery and perplexity of this city’s residents. The driving! The road rage! The tyranny of the builders! The wickedness of property brokers! Mr Tully has seen it all, and speaks of it in mild fury, the exclamations mellowed by age and a typically British stoicism which helps him get on with life here.

With Delhi, he has the same love-hate relationship that many older people do—he served as the BBC’s South Asia correspondent in this city for 22 years, and, since 1994, when he resigned, he has worked out of the Capital as a freelance journalist. Mr Tully and his partner, author Gillian Wright, have effectively put down roots here, living in their own house in Nizamuddin West. Perhaps they could live happily amid nature in a cottage somewhere in the Himalayan foothills, where they welcomed the 80th landmark, but it isn’t easy to give up a life built up over so many years.

Born to British parents in colonial Calcutta, Mr Tully first came to live in Delhi in 1965. Working as an assistant representative of the BBC, he took up residence at an apartment in Hauz Khas with his wife, children, and a cook from Meerut called Gareeb. Much has happened since then. Mr Tully and his wife separated long back. Gareeb is dead; his daughter Babli has taken his place as the household cook. Her son, Kaka, drives Mr Tully around the city.

Mr Tully’s association with his former employer has not ended. The theology student who once hoped to become an Anglican priest is one of the presenters of Something Understood, a BBC Radio 4 programme on “ethical and religious discussions that examine some of the larger questions of life”.

On the vital question of life in Delhi, Mr Tully says his opinions should be viewed in the context of his desire to get out of urban settings and settle down in the countryside. “People in Delhi cope with great stress,” he says, “and that demonstrates itself in their behaviour. This is particularly true of the driving here—so appalling…. One finds oneself having to suppress one’s own rage.”

His drawing room seems far removed from the Delhi he is talking about. There are paintings on the walls, little knick-knacks on a coffee table, a small radio atop a cupboard, bookshelves stuffed with the books by Rudyard Kipling, George Eliot, Jane Austen and Harry Potter, and the rocking chair cushions have dolphins painted on them. A walking stick stands in one corner.

The melodious sound of the afternoon azaan wafts in from a nearby mosque.

Mr Tully is sensitive to the temptations of his neighbourhood. The historic village of Nizamuddin Basti is just behind his house. He sometimes walks there to get a flavour of “a little bit of Old Delhi tucked unexpectedly in the heart of New Delhi”.

Yet Nizamuddin West pales in comparison with Nizamuddin East, the fancy neighbourhood on the other side of the main road, home to famous people like author Vikram Seth. Tully, who once resided in Jor Bagh, where his apartment looked out on Safdarjung’s Tomb, lived in the East for more than 30 years. He moved there in 1977 after his return to India—he was expelled during the Emergency by Indira Gandhi’s government.

In the 1970s, Nizamuddin East was not considered as posh as Golf Links and Sunder Nagar. It was a sleepy locality with many bungalows, which would later give way to apartment complexes. A struggling painter named Tyeb Mehta also lived in the East with his family. Every morning, Mr Tully and Gillian Wright, with whom he has been living since 1982, would walk around the neighbouring Humayun’s Tomb with their two dogs. Like all morning walkers from Nizamuddin East, they would enter the Mughal-era monument through the beautiful Arab Ki Sarai gateway.

Those Delhi days must have been a long Indian summer for Mr Tully. Back then, there was no CNN and Al Jazeera. BBC was the most credible source of information for Indians used to the state propaganda on Doordarshan. It is said that Rajiv Gandhi turned to BBC to confirm the news of his mother Indira Gandhi’s assassination in 1984. As its India head, Tully enjoyed an exalted status among Indians.

By the time rents in the East skyrocketed and his landlady began demanding Rs.1 lakh a month, Mr Tully had long left his job with the BBC. “Gillian and I thought her demands were excessive,” he says. “Since it looked like we shall stay in Delhi indefinitely, we decided to buy our own flat.”

They eventually bought the ground floor of a property in Nizamuddin West in 2010. What happened in the duration when he looked for a house and bought one is worth a magazine feature Tully ought to write one day. The trickiest part was dealing with brokers who only wanted payment in black money. “But we had only white money,” says Mr Tully. He learnt something new in the process: “One broker gave us an amazingly complicated way to turn white money into black. All this while, I had thought the usual thing was to convert black into white.”

It took Mr Tully and Ms Wright one year to find their dream home, though it’s not exactly the stuff dreams are made of. The drawing room window looks out on to a dust haze created by construction across the street. As in the East, most of the old houses in the West, too, are being demolished to make way for apartment complexes.

Though the immediate surroundings may have been spoilt, the building blocks of Mr Tully’s daily routine are made of all the fine things Delhi offers—morning walks in Lodhi Gardens, memberships of the India International Centre and the Gymkhana Club, the Faqir Chand & Sons book store in Khan Market, Sunday mass at the Cathedral Church of the Redemption near Rashtrapati Bhavan, south Indian meals every Saturday night at the jam-packed Saravana Bhavan on Janpath, where the wait goes up to at least 20 minutes.

These externalities of city life fit harmoniously with the domestic rituals at Nizamuddin West: writing in longhand, reading books to take notes and to do reviews, eating dal chawal for dinner, sheltering stray dogs in the courtyard, and washing it all down with Kingfisher beer (though I noticed several empty bottles of Jameson Irish Whiskey beside the kitchen sink).

And there is always the morning, when Mr Tully sits on his porch with The Indian Express and the Hindi daily Dainik Bhaskar. At that hour, the world outside the newspapers is utterly serene. No sounds, no dust—a time when our man from England may feel it is all right to be a Delhiwalla.

The Delhi Walla from England 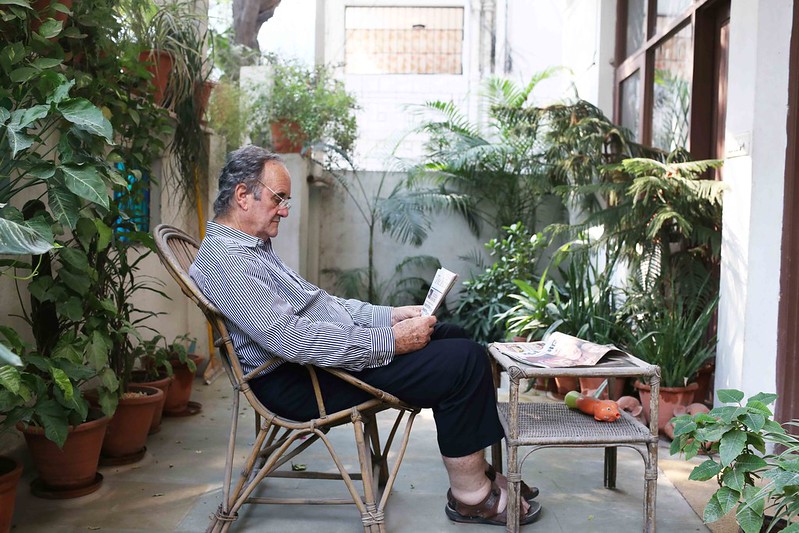 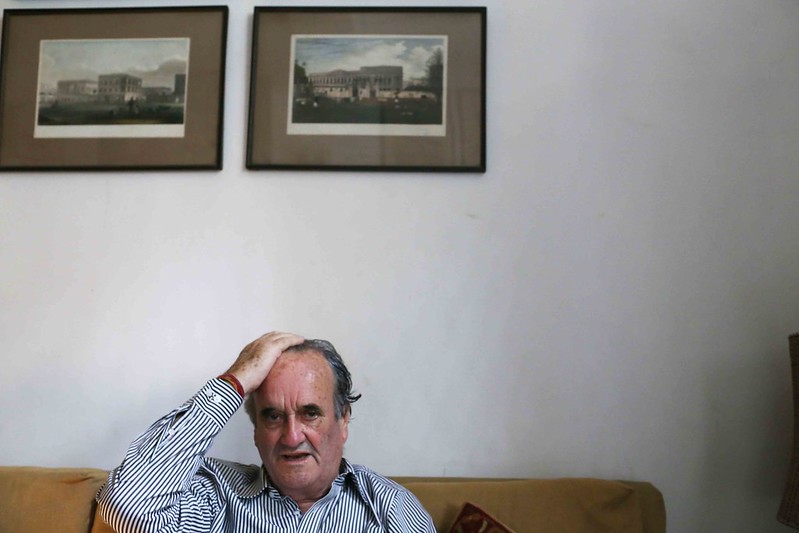 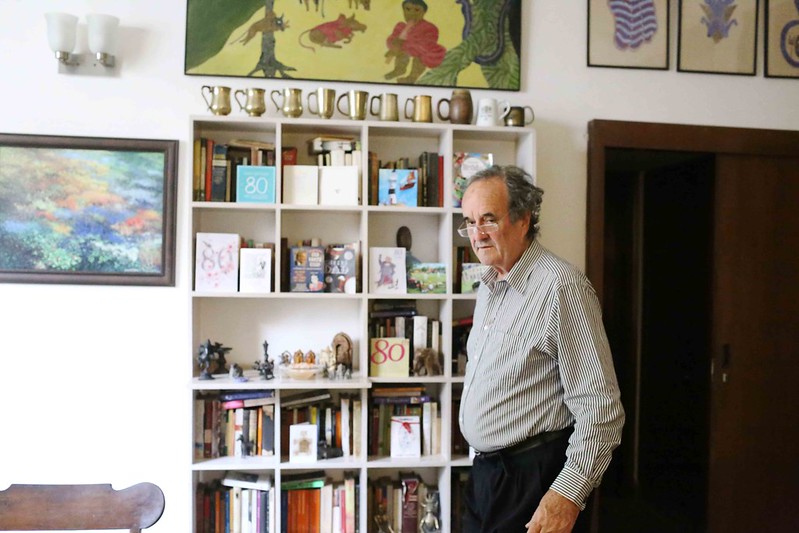 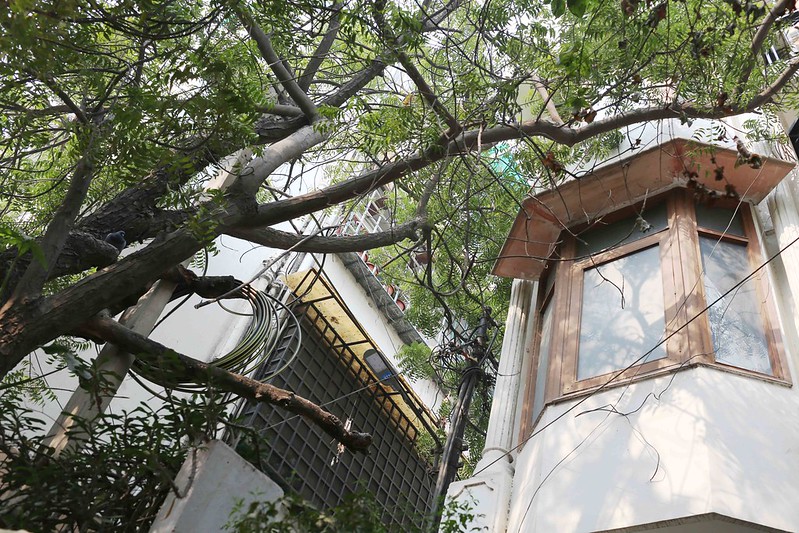 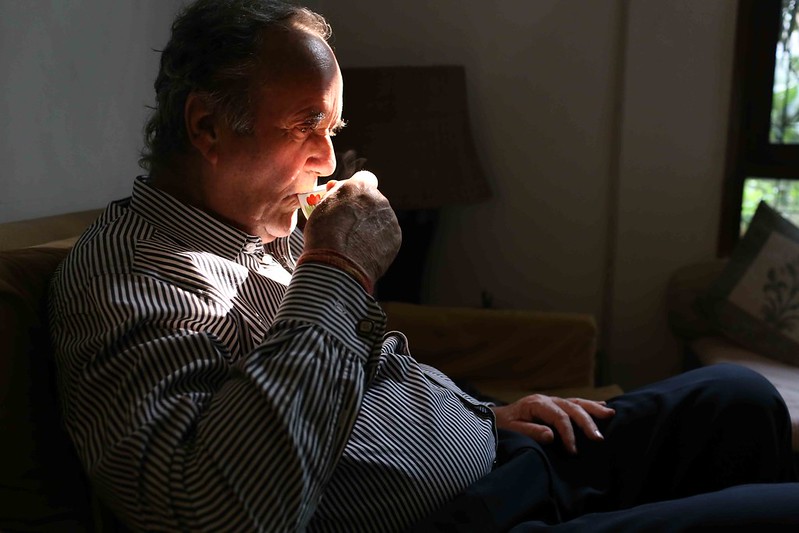 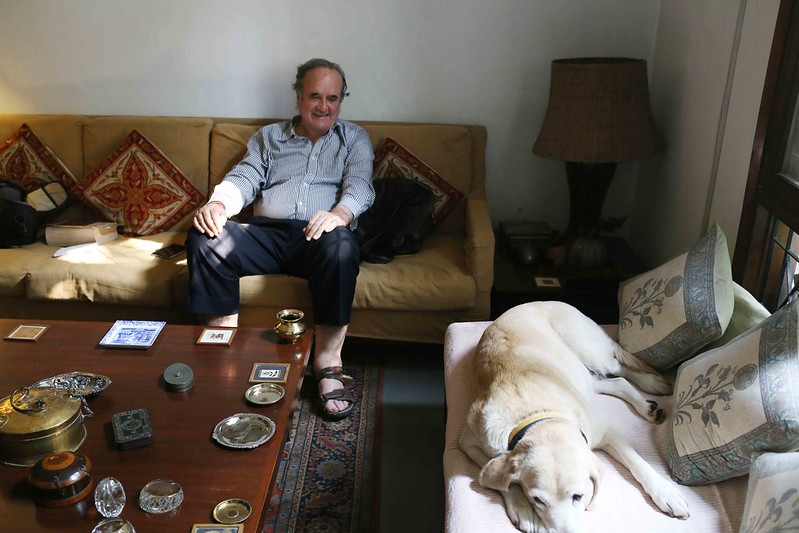 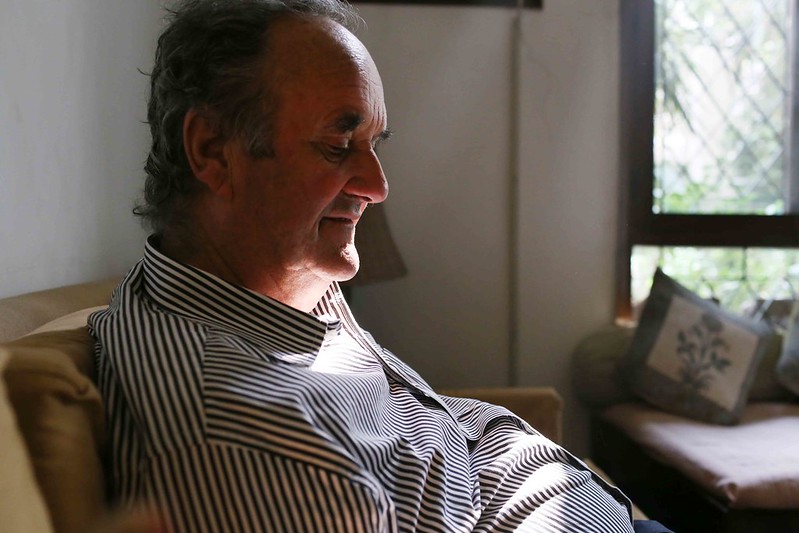 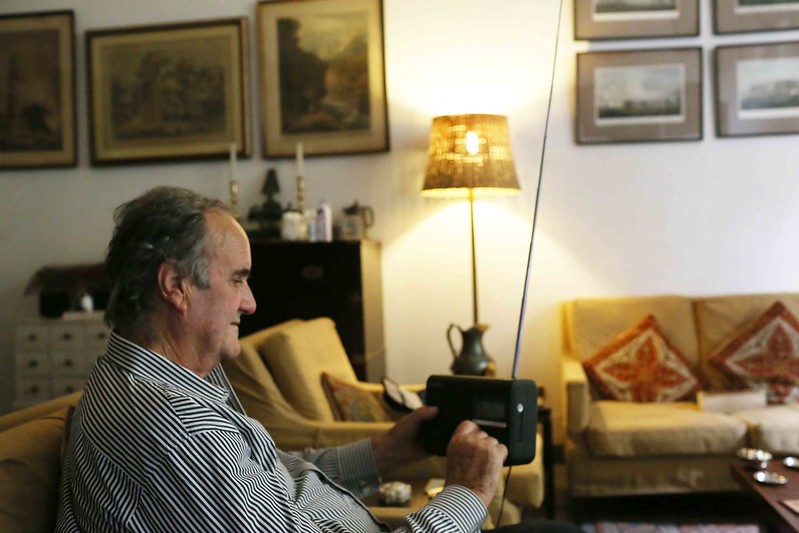 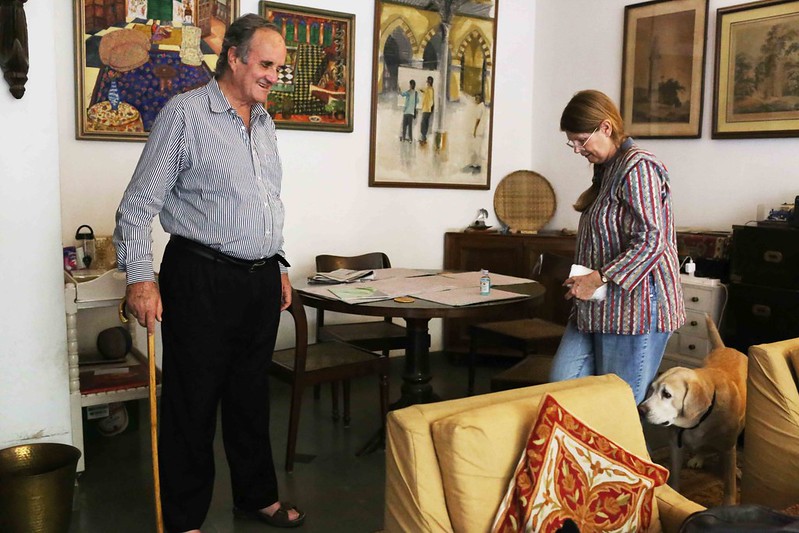