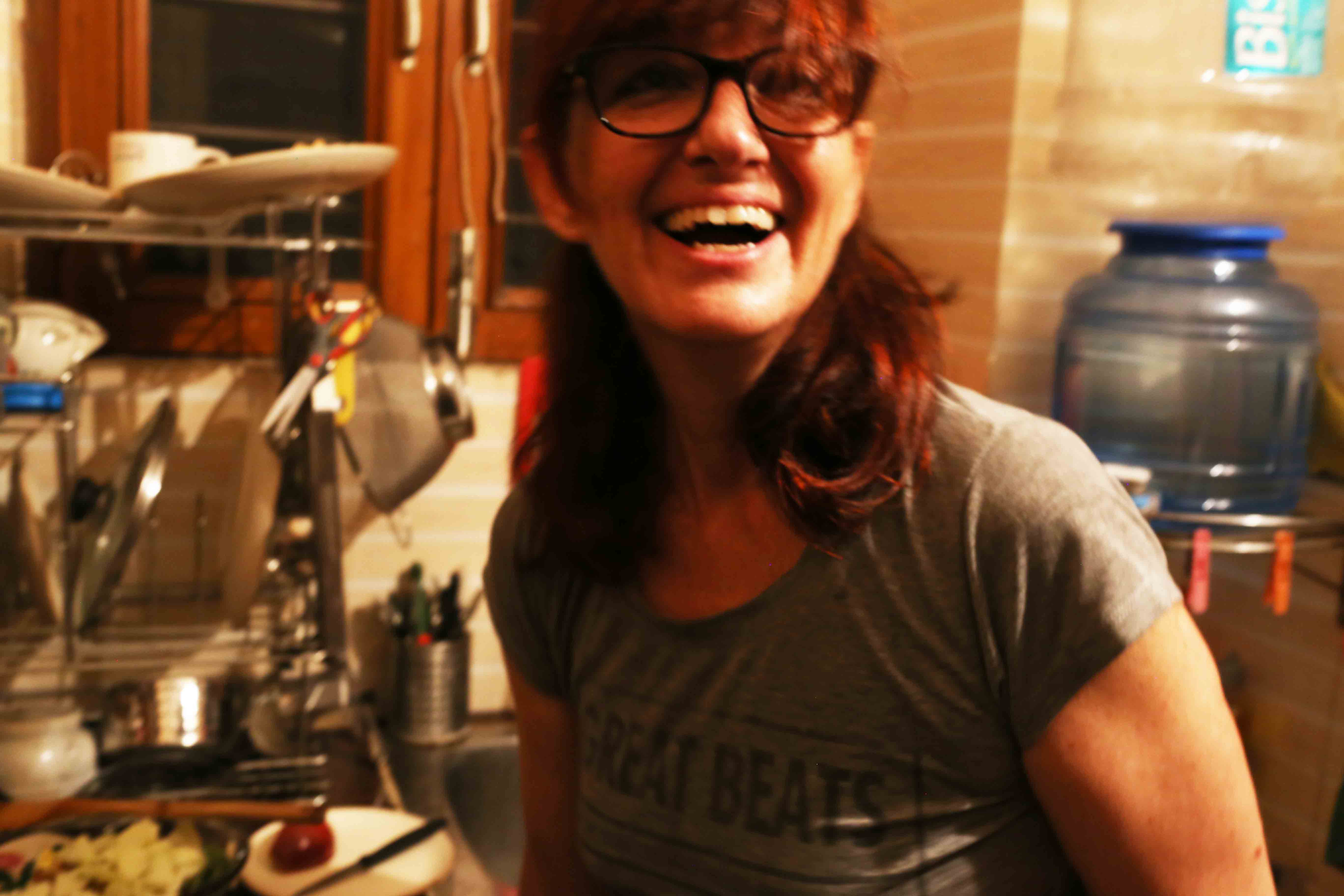 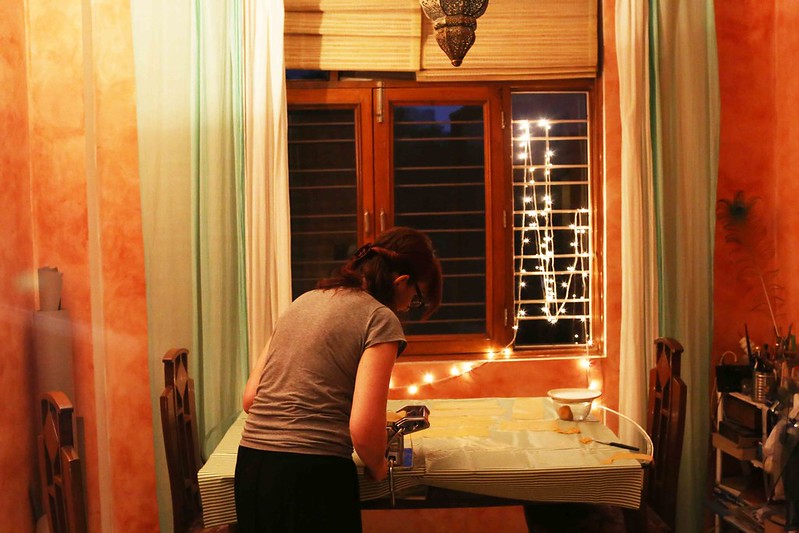 She is a white European woman in South Delhi. Her home, however, is not in places such as Jangpura, Hauz Khas Village, Defence Colony, Greater Kailash-II, Malviya Nagar, New Friends Colony or any other similar localities in the city where you would expect a non-diplomat white expat to reside (black expats of Delhi are another story, of course).

Instead, designer Elena Tommaseo, a native of Venice in Italy, lives in Lajpat Nagar. Her flat is close to the Gurdwara Sri Guru Singh Sabha in Krishna Market, and a walking distance from the charmingly-named Sona Lisa Beauty Salon.

Ms Tommaseo is the only white person living in the vicinity, and this warm evening she is to dazzle The Delhi Walla with her take on Indo-Italian fusion cuisine.

Little did I know that gaining a glimpse into her kitchen would bring me closer to the texture of Delhi’s multi-layered expat life.

Ms Tommaseo had originally promised to make bathua risotto—so far I have had this leafy vegetable only at home, stuffed in the paratha or mixed in the raita. Our rendezvous begins with a disappointment. Opening the door, she tells me apologetically that she had forgotten that the season of bathua was over. So now she has decided to make for me her “real” home-made Italian pasta with “real” Italian flour.

Accordingly, I find Ms Tommaseo’s drawing room turned into a makeshift pasta-making factory. She has fixed the gleaming pasta machine on one side of her dining table and alone she is performing the complicated process of rolling out the dough into long narrow pasta strips.

On finding herself being photographed, she looks alarmed and says, “Oh no! Please don’t portray me as some crazy Italian woman who rolls out pasta every night in her home… please mention that I often make simple dal chawal for dinner!”

It is, after all, Ms Tommaseo’s seventh year in the country, long enough for her to develop a taste for the Indian khana. At times, she even goes to the extent of ordering dal makhani from Mughal, a nearby restaurant just behind Eros cinema. (Her kitchen rack stands out with one of its takeaway boxes.)

Like most Delhiwallas, Ms Tommaseo is hyper-sensitive about her address—this has been her flat for four years. “It’s true I’m living in Lajpat Nagar but I’m more of a Jangpura person… I just don’t have the budget for its high rents.”

Though these two neighborhoods are next to each other, the green expansive Jangpura feels a continent away from the congested Lajpat Nagar. (Next to Jangpura is the beautiful Nizamuddin East, which is even more vulgar in its rents.)

Even so, I find Ms Tommaseo’s neighborhood quite charming. Hers is a park-facing flat. Alas, the park has neither grass, nor flowers, and is teeming with a large number of women and children. “It’s a little too alive,” she says.

Without any bitter feelings, Ms Tommaseo talks of the long wakeful nights when the neighborhood hosts devi jagrans and mata ki chowki prayers in the park the whole night long, with the loudspeaker playing devotional bhajans celebrating one or the other goddesses.

To be sure, Ms Tommaseo is lucky in having kind neighbors who occasionally invite her for a cup of chai. It is another matter that she is extraordinarily shy of giving them a chance to showcase their hospitality. “ I’m always asked the same questions during these visits,” she says with an amused sigh. “Have you married? If I say ‘No’, then the next question is, “What is your age?””

“Are you married?” I ask Ms Tommaseo.

She makes a face.

Delhi’s friendly auto-rickshaw drivers also show an active interest in Ms Tommaseo’s marital status. By now she has developed a standard response to quickly kill the curiosity–“Yes, I’m married. Yes, my husband is a businessman. Yes, I have two children. Yes, one boy, one girl.”

I follow Ms Tommaseo into her kitchen. She begins the preparations for the pasta’s tomato sauce by opening a tetra pack of factory-made tomato puree. “It tastes better than the Indian tamatar,” she says, her voice betraying a hint of contempt as she utters the word ‘tamatar’. “The Indian tomato tastes too mild,” she declares.

Picking up a bottle of oil, she says mournfully, “I have to use the extra-virgin olive oil from Spain… we Italians are just not good in selling ours abroad.”

Finally, the meal is ready to be served and Ms Tommaseo arranges the table, complete with forks and knives—not to forget the Indian-made red wine in the wine glass. It is almost feeling like as if we are in Italy. Just then a pressure cooker gives out a shrill whistle from one of the kitchens in the neighborhood. The aroma of arhal dal wafts through Ms Tommaseo’s window. The Italian spell gets broken.

But the pasta is truly delicious.

[This is the 129th portrait of Mission Delhi project] 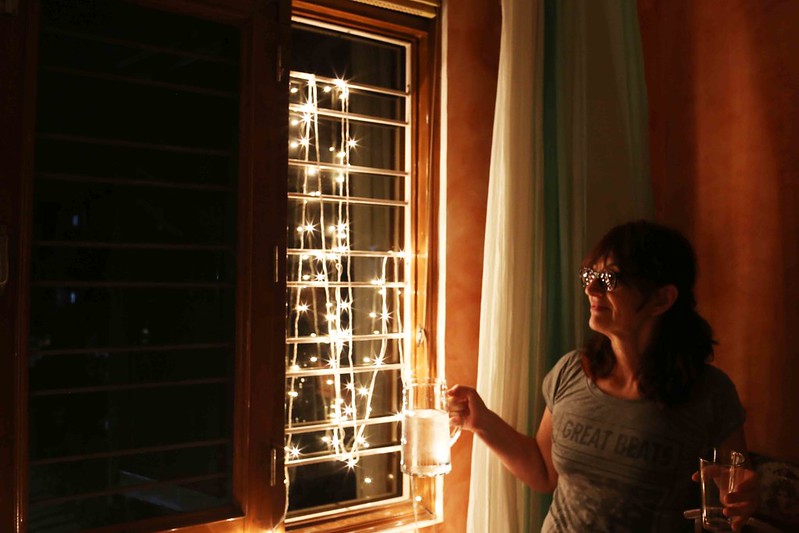 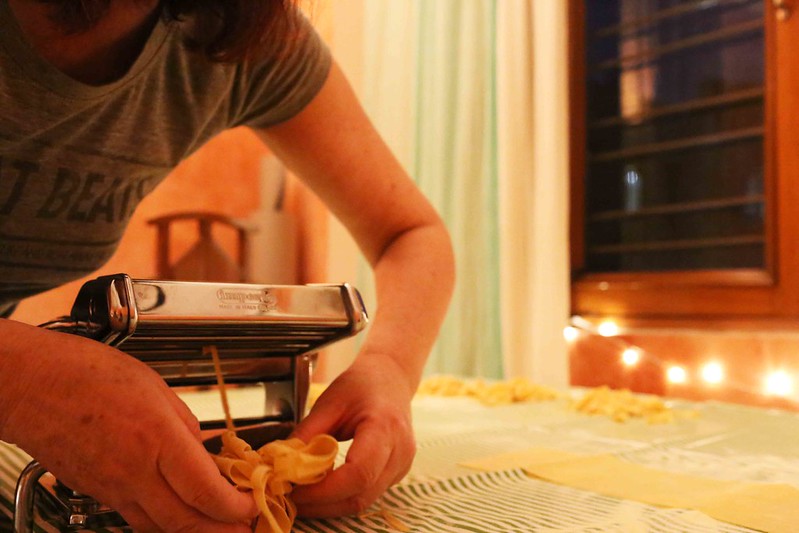 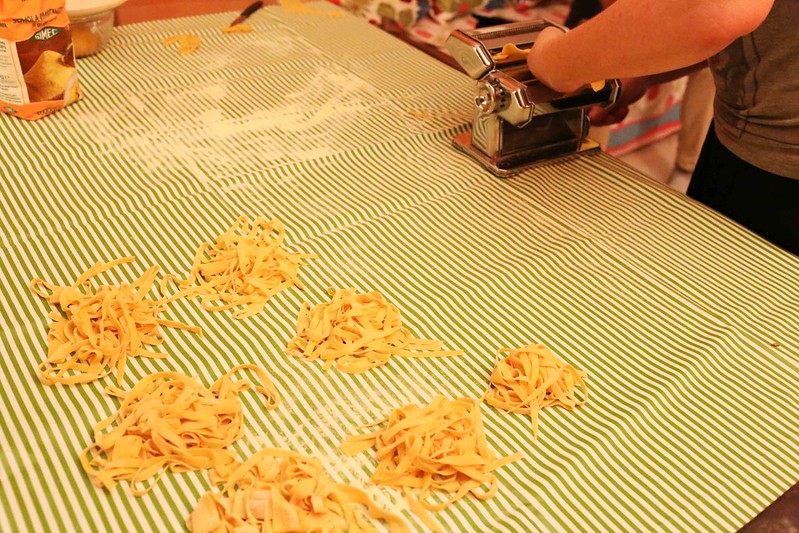 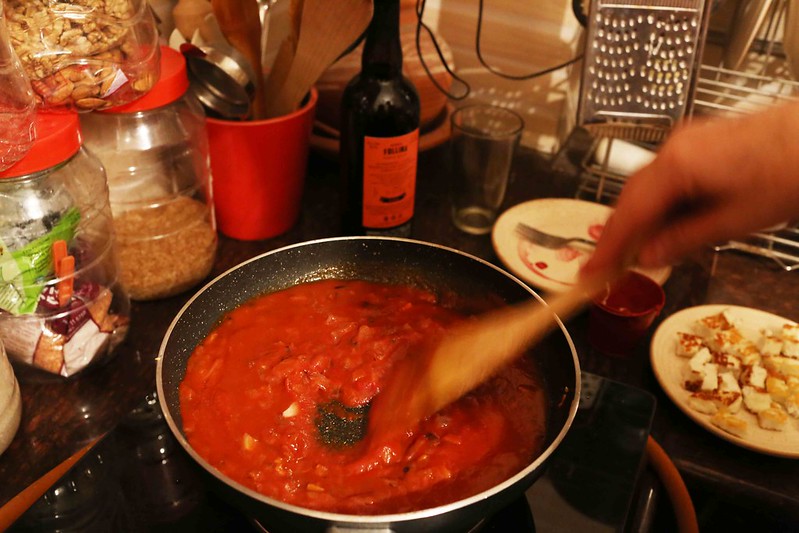 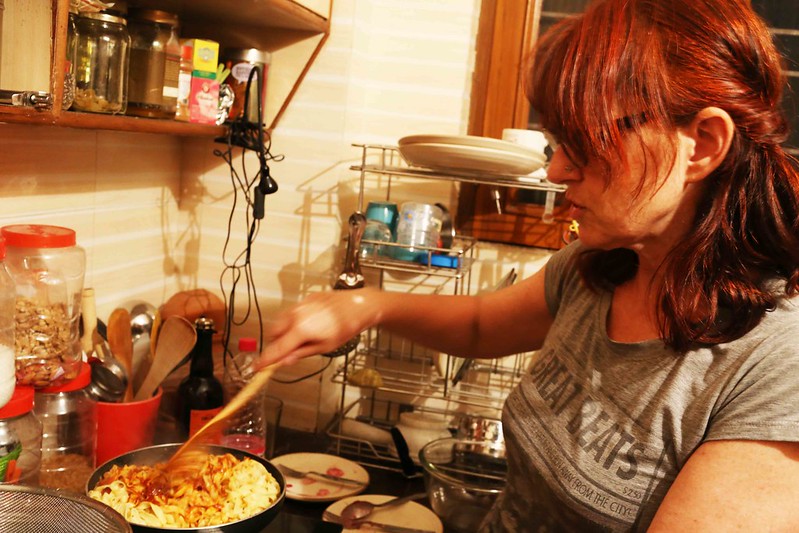 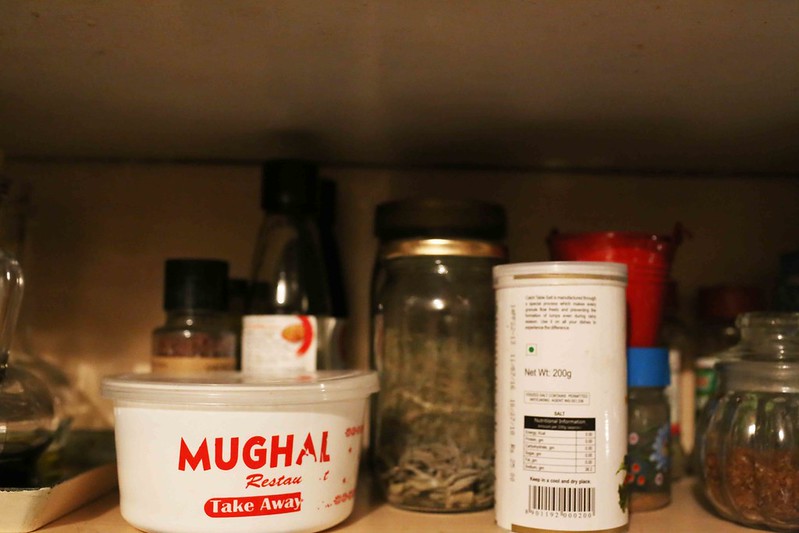 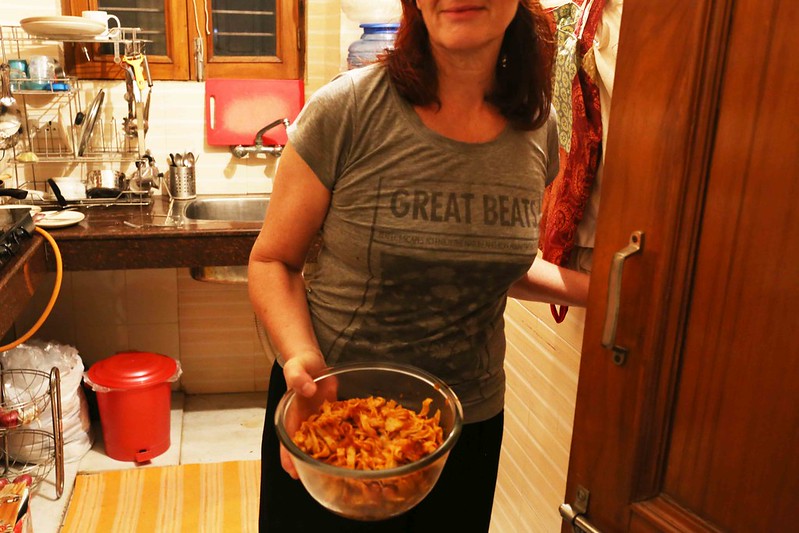 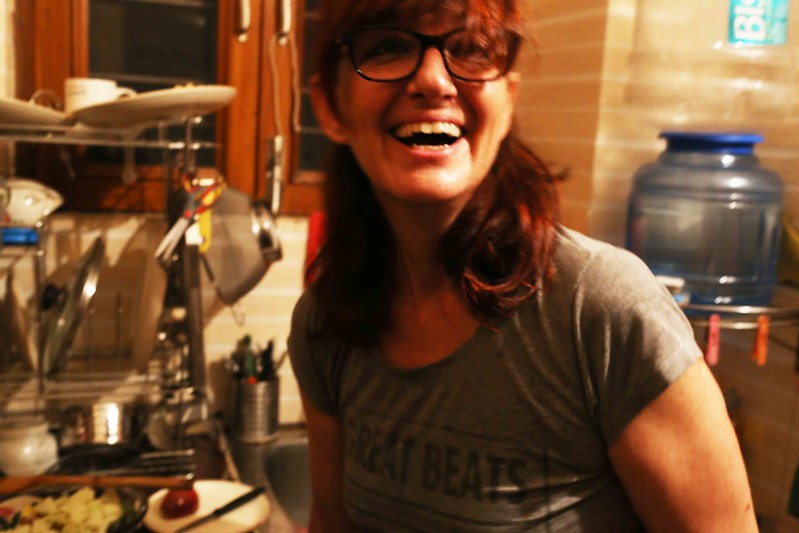