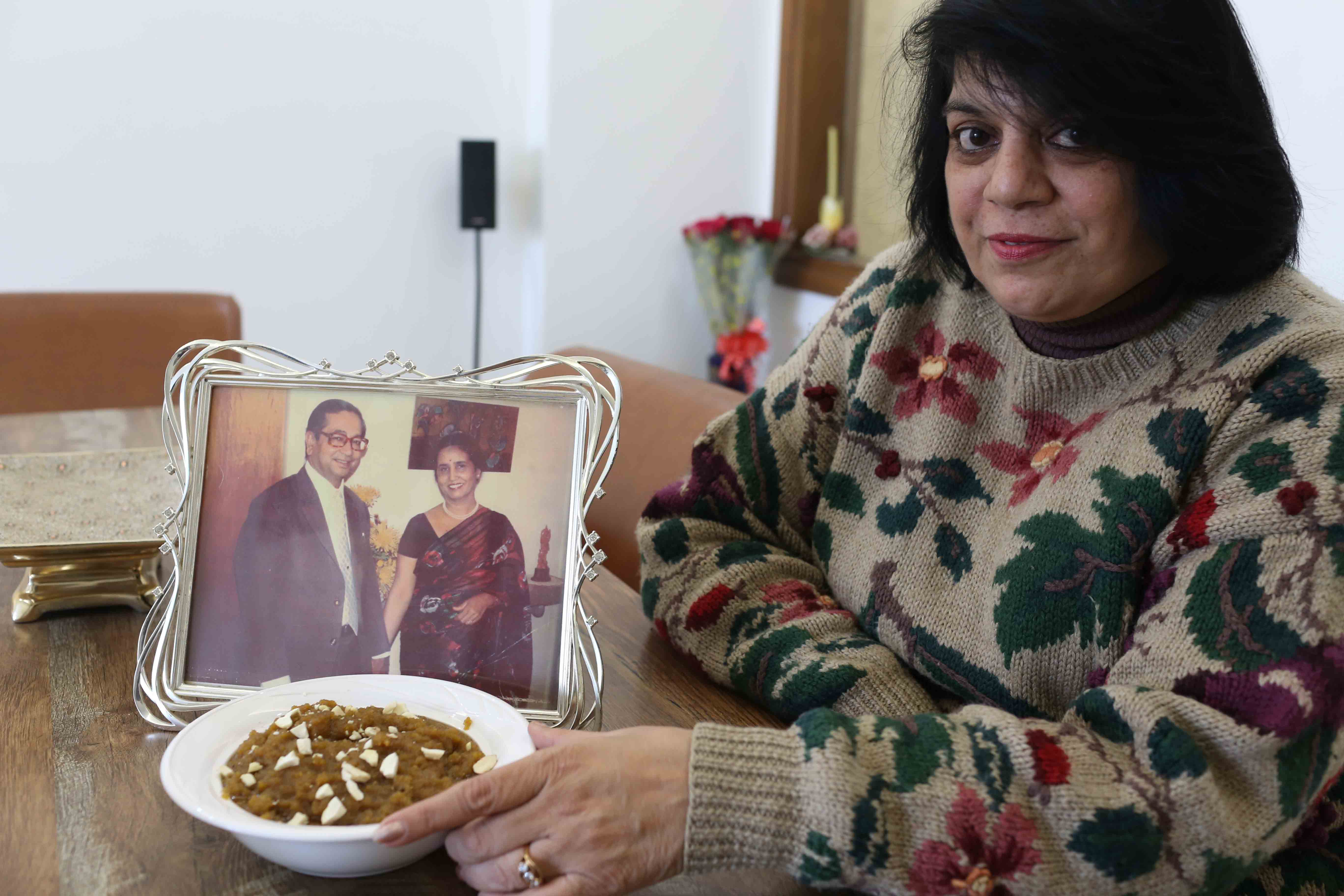 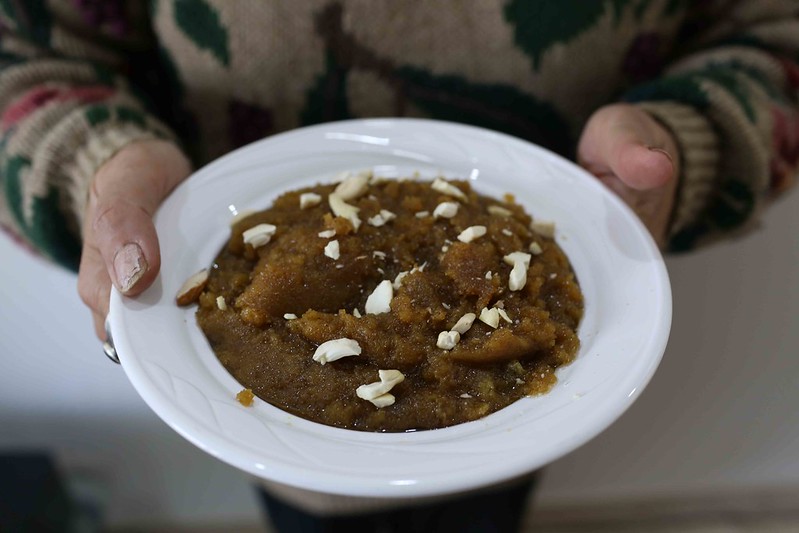 Once upon a time there lived a woman. Kind, amiable and generous. She was much loved by her large circle of friends and by her family. Prakash Kapur had also cultivated a happy relationship with her kitchen. Her chhole, for instance, were considered legendary by all those lucky enough to be invited to her table.

And then she fell gravely ill. On the morning of January 1, 2004, a few days after returning from the hospital for the last time, she asked her daughter-in-law to make a dish that she used to rustle out on happy occasions. Since she was too weak to walk all the way to the kitchen, she asked her bahu to bring all the ingredients to her on the bed. She made all the measures and gave exact instructions to cook the dish.

Once it was ready, she heartily ate the dish. She passed away a few days later.

That dish was Kele ka Halwa.

This afternoon, that same daughter-in-law will make the same banana halwa that she had made for her mother-in-law that fateful morning.

“I made it last time during the Navratras,” says Nandita. The Delhi Walla is at her apartment in south Delhi’s East of Kailash where she lives with her husband and son.

Today Nandita is actually hosting a lunch for friends. Biryani, pasta, chhole and dahi bhalla — she is making it all, and by herself. And of course, there will be banana halwa for the dessert.

And she’s not looking stressed.

“I cook daily for my family so this is easy!”

Nandita says her mother is also a much-appreciated cook but she confesses that she hardly follows any of her methods now. Over the years, her kitchen life has come to resemble that of her mother-in-law. “It happens… daughters start living in a new family after marriage and that alters their cooking habits.”

In fact, the same thing happened with the mother-in-law’s own daughters, two of whom live in the US and “their way of cooking is now totally different from ours”.

Fortunately, some elements of the late Prakash Kapur’s cooking style continue to live in Nandita. Here’s the recipe of the famous halwa.

One average-sized katori (bowl) of sooji, but less by 3 tablespoon

One heap-full katori of sugar, the peak of the mound should be higher than the bowl

Some almonds and raisins

Ghee, to taste, but a little extra if you are a Punjabi like me

A handful of deseeded small and big cardamom

Place a pan on the burner. Fill it with water. Heat it for a while. Now take it off the flame. Add sugar, colour and cardamom. Keep it aside.

Take a karahi and heat it over a low flame.

Add sooji. Keep stirring it into ghee but make sure you do this on a low flame or the sooji will start to burn before you know it.

Stir again for a little while until the mixture turns more brown.

Now add the maida. It is always added in the end as it roasts very quickly.

Keep stirring until the ghee starts to come out of the mixture.

Now slice the bananas over the karahi and stir them into the mixture.

Crush the almonds and toss them into the karahi along with the raisins.

Add the watery syrup, and continue to stir the mixture. At this point, I start to stir with both my hands. It is easier that way.

The halwa is ready when the mixture soaks the water and starts to leave the ghee.

Memories of a recipe 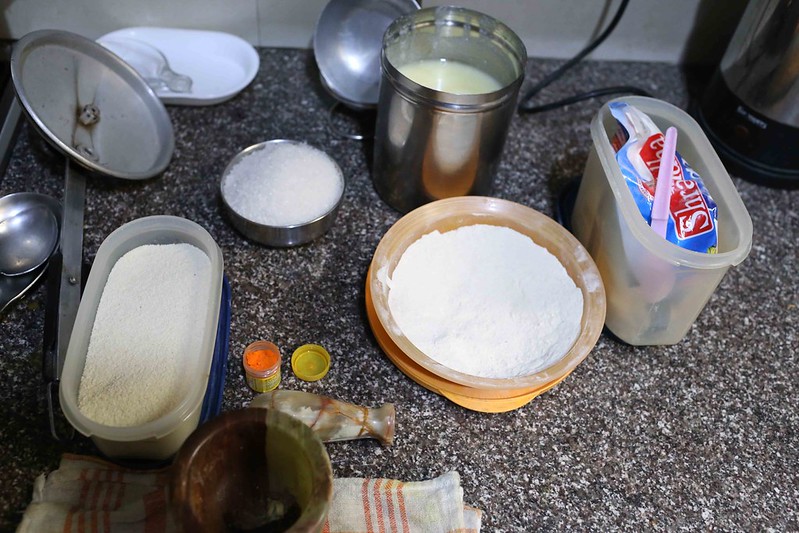 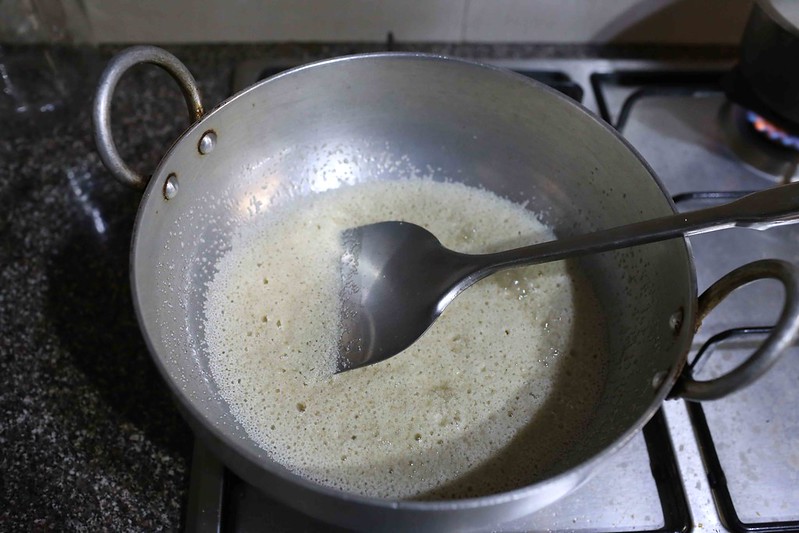 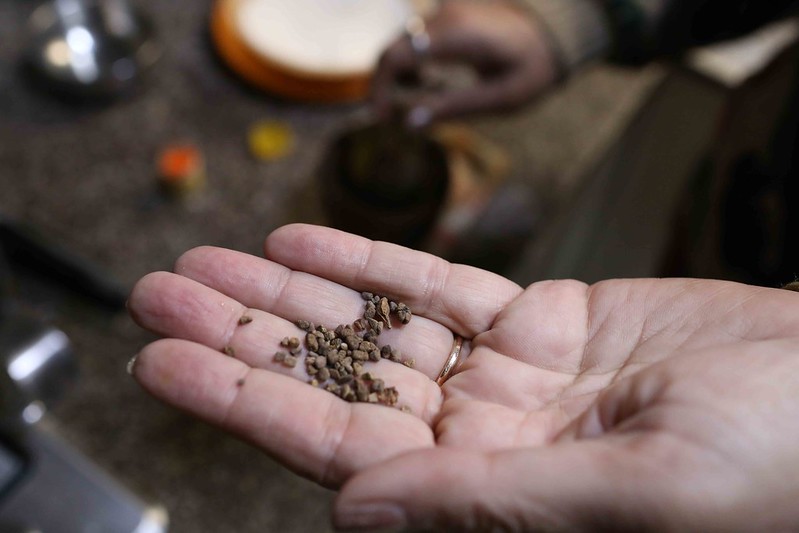 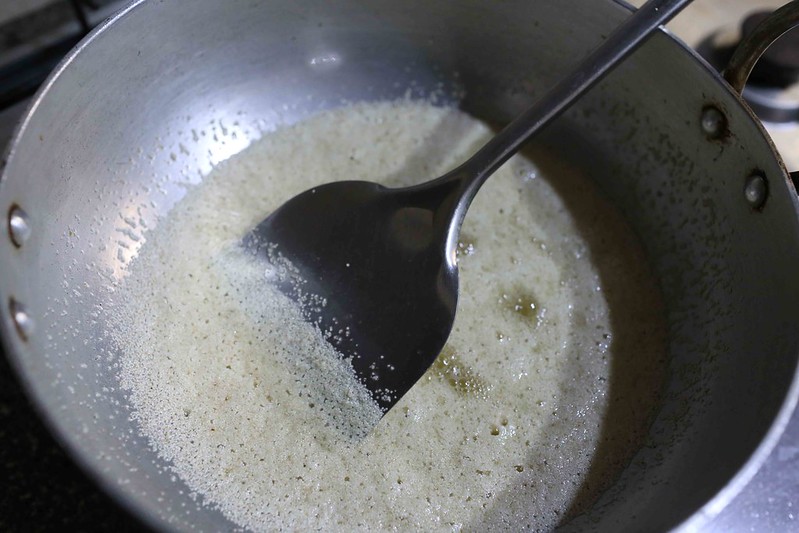 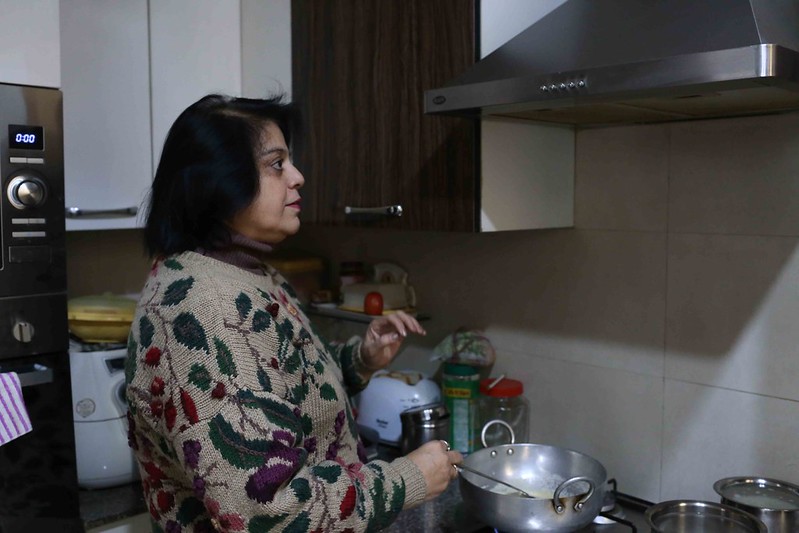 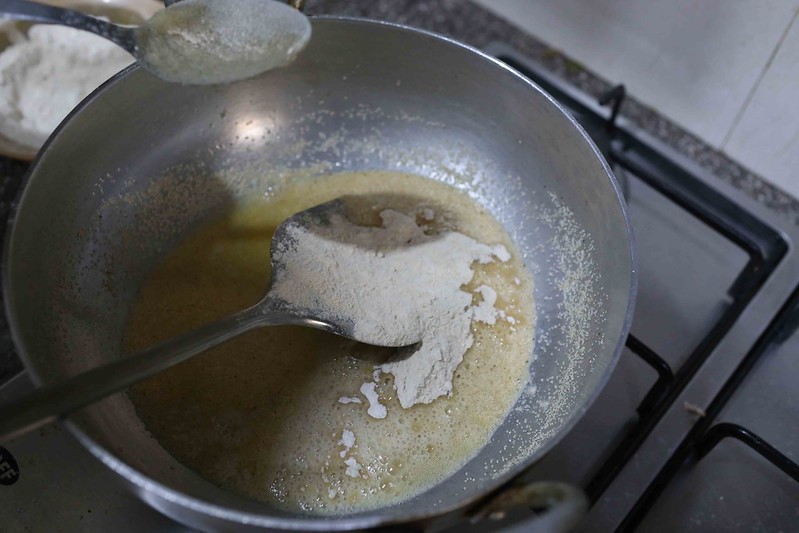 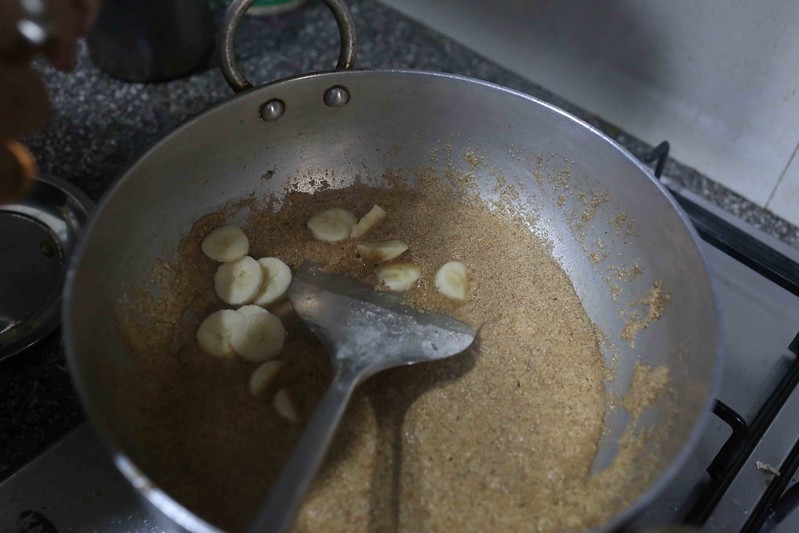 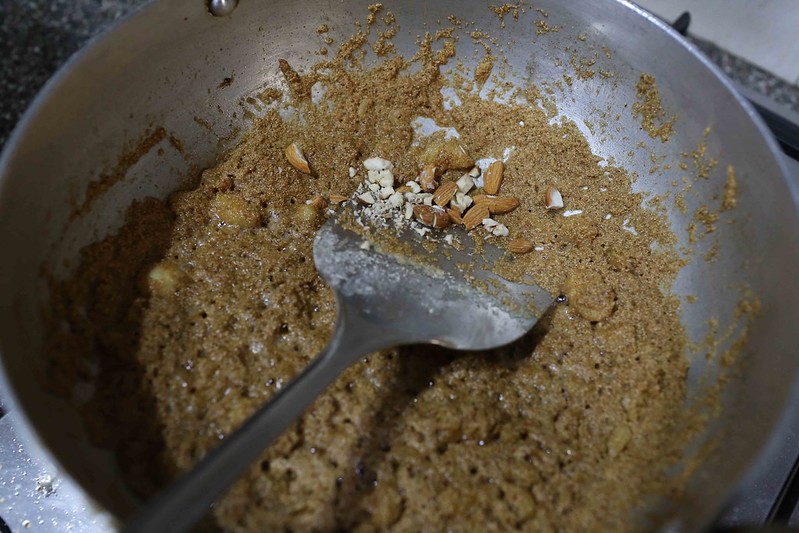 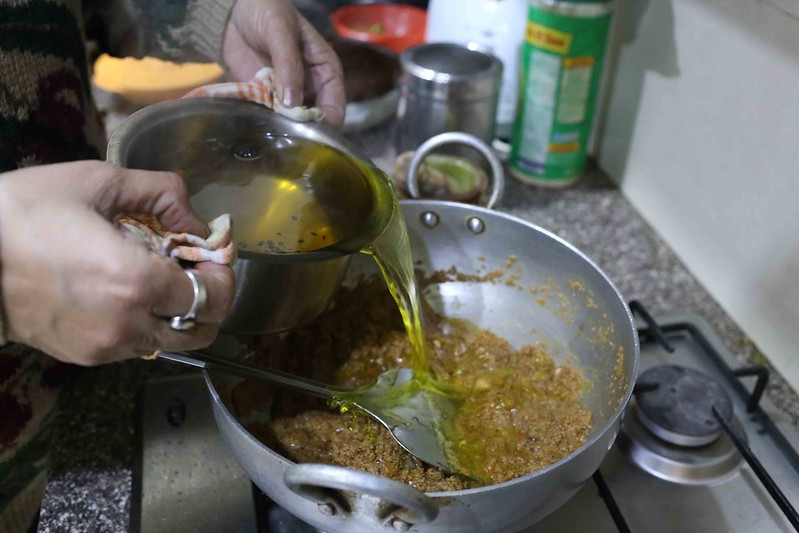 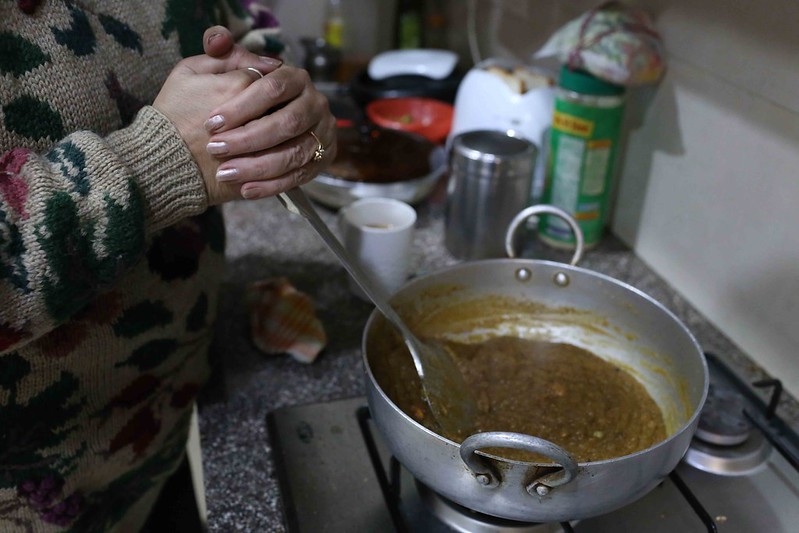 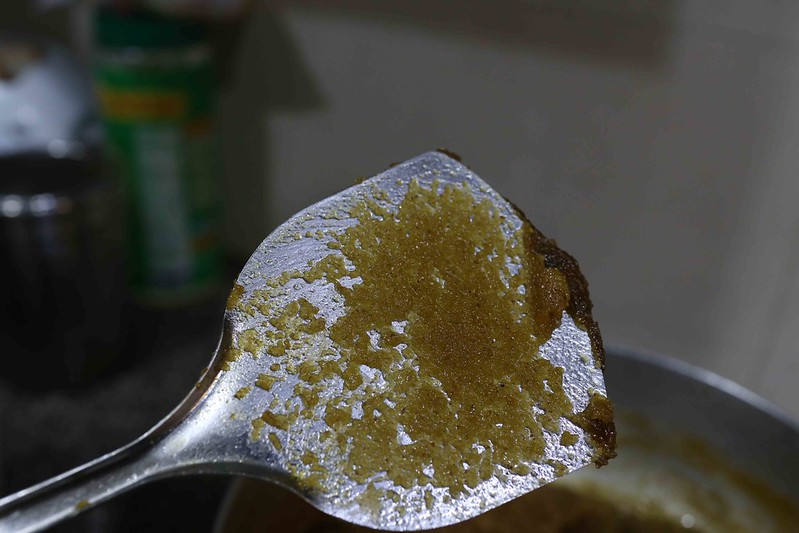 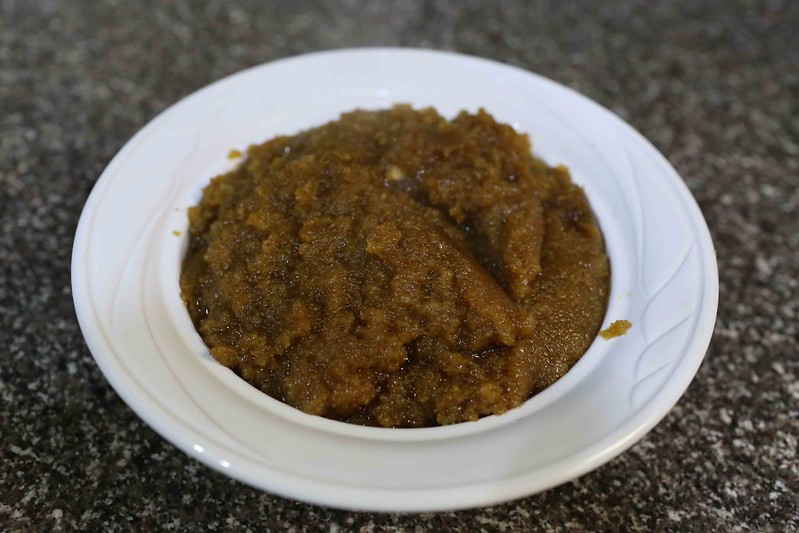 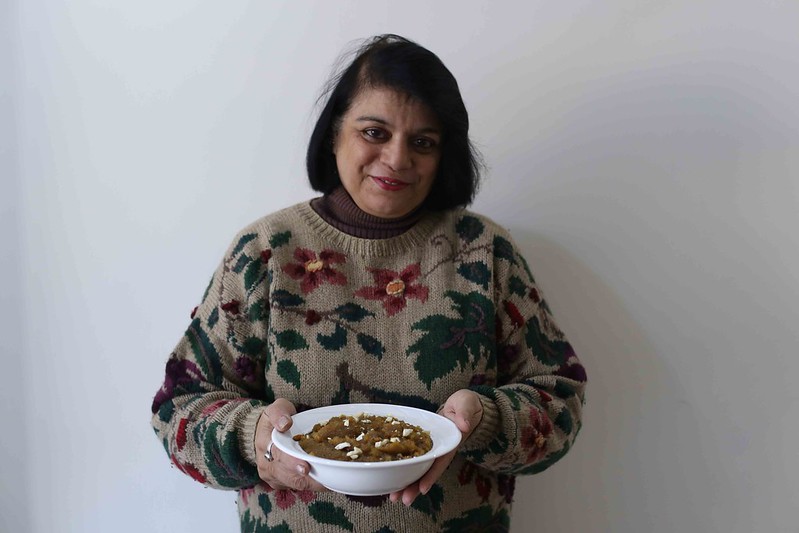 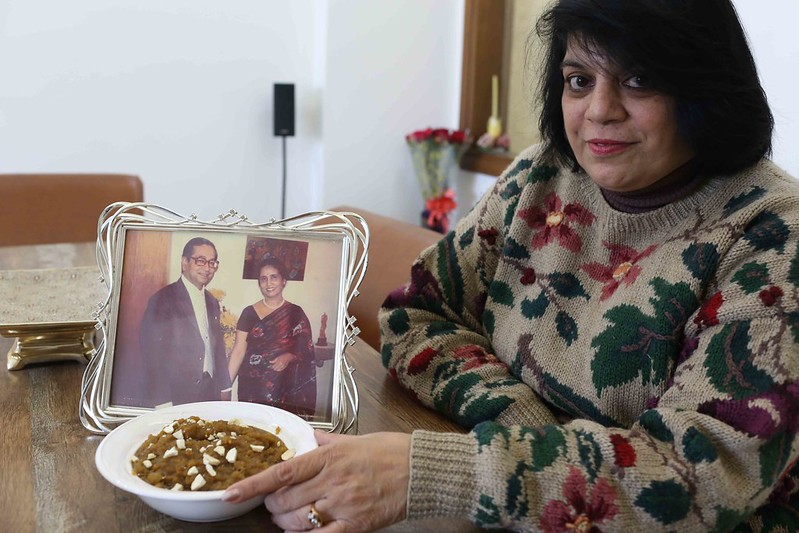