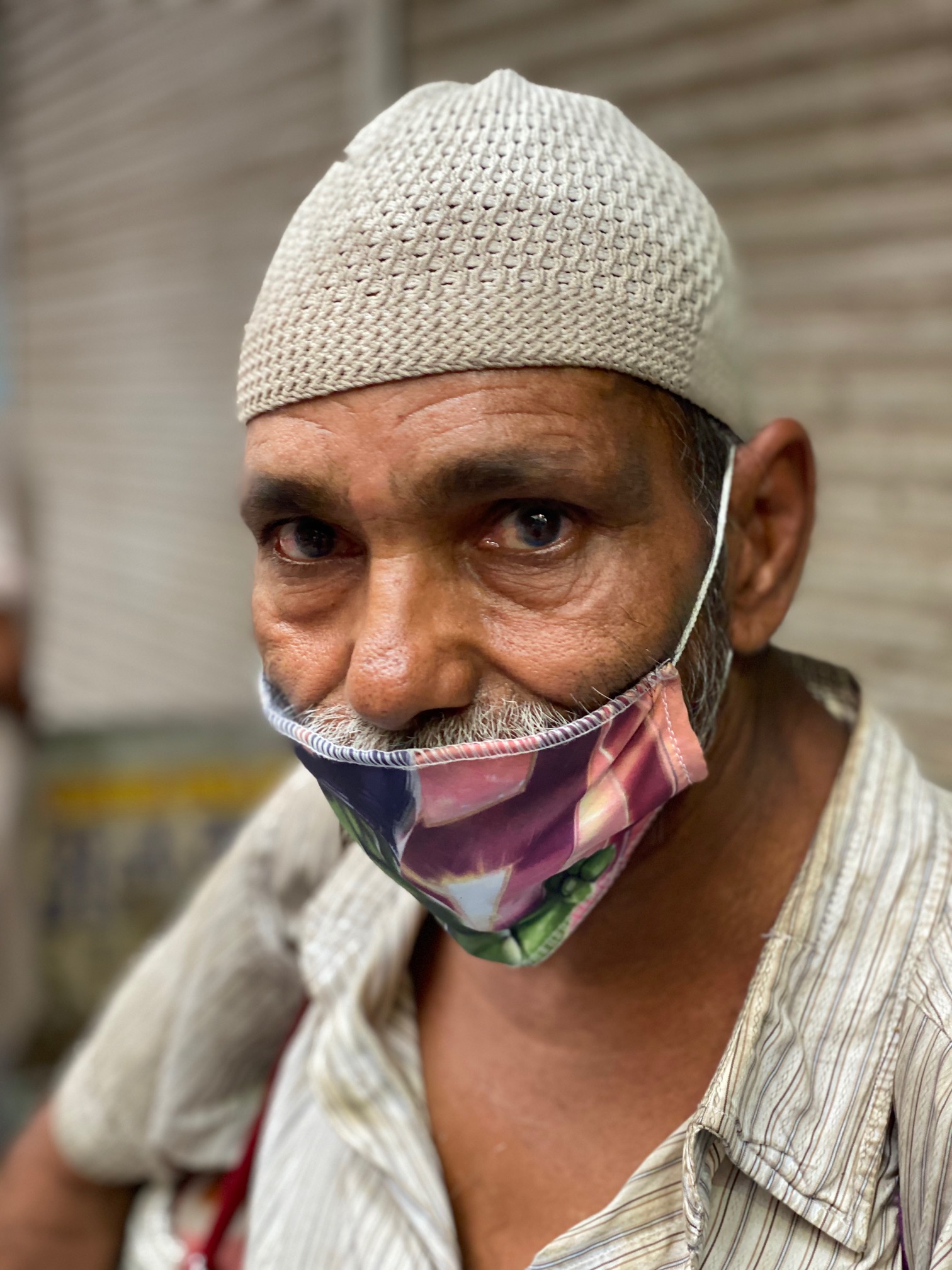 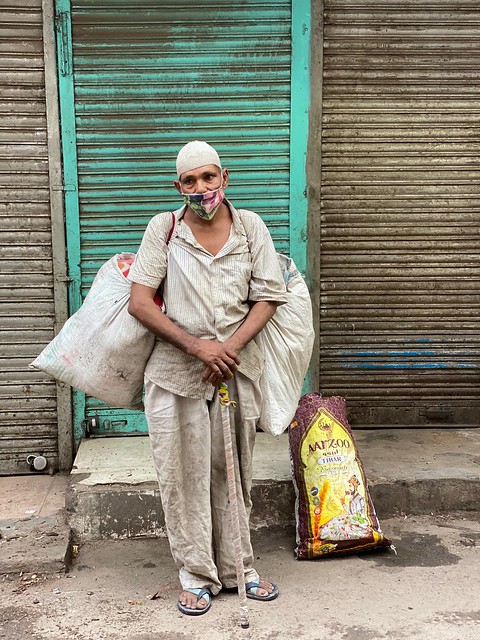 He is standing motionless. His large eyes are gazing straight ahead, unblinking, as if penetrating into infinity.

The middle-aged man in shirt and pajamas is stationed by a pavement in a congested central Delhi market. It is very early in the morning and the shops are still shuttered.

The man has huge bags hanging down from both his shoulders. The plastic sack lying by his side is of a basmati rice brand, printed with the illustration of an extravagantly dressed nobleman ensconced beside a mound of luscious biryani.

“That’s also my samaan (belonging),” he mutters, nodding his head towards the rice sack—it is filled with something too, but not rice.

A huge rat brazenly runs around the man’s feet and disappears into the adjacent drain. He shows no reaction.

The man is supporting himself on a lathi, a walking stick. “Tooti taang (broken leg),” he explains, shaking his head. The lathi is wrapped in various layers of plastic, and the top is tied with padded pieces of various clothes. “So that it doesn’t hurt my hand to hold it for so long…. the plastic keeps the lathi free of gandgi (filth),” he says, gesturing absentmindedly towards a rain puddle.

Introducing himself as Dherapad, the gentleman informs that he is “hoping that somebody will give me money for chai and breakfast.”

That’s how he survives from one morning to another, he says, or rather murmurs, for he is talking in a low voice. It becomes impossible to discern his words, for instance, when he repeatedly gives the name of his native place.

Showing the bags hanging from both his shoulders, he says they are packed with his clothes and bedding. “Mera sharir mera makan hain (my house is my body)… wherever I go, my house goes with me.”

It is difficult to describe his looks. He is wearing a mask. It isn’t the drab hospital-like face-wear other pedestrians are sporting. His bright coloured mask shows the popular animated character Green Hulk, posing in all his anger and aggression. “Some unknown person gave it to me,” he shrugs.

It appears that Dherapad is familiar to the people in the area. A few passersby acknowledge him with a friendly nod. And now an elderly man carrying a bundle of something hands it to Dherapad, requesting him to hold it while he shop around for mangoes. Dherapad wordlessly takes the bundle and holds it the way people with no experience of babies hold them when asked. The elderly man returns after a while, takes back the bag, taps cheerily on Dherapad’s shoulder out of gratitude and walks away.

Across the road, a cat tiptoes under a vegetable cart and Dherapad follows her movement patiently.

On being asked about his family, he says that “I am alone and I am enough for myself.”

His mask slips down under his lips—he is smiling.

As the morning lengthens, and the street gets crowded, Dherapad remains still, rooted to the same spot. The passersby go past him, barely noticing him. As if he were a market statue.

[This is the 328th portrait of Mission Delhi project]

His body, his house 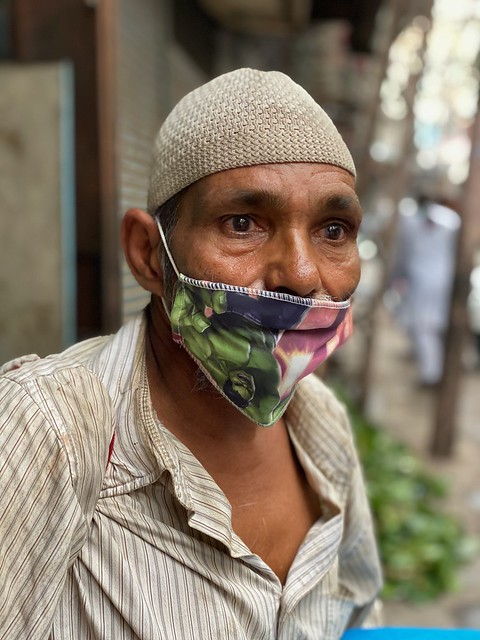 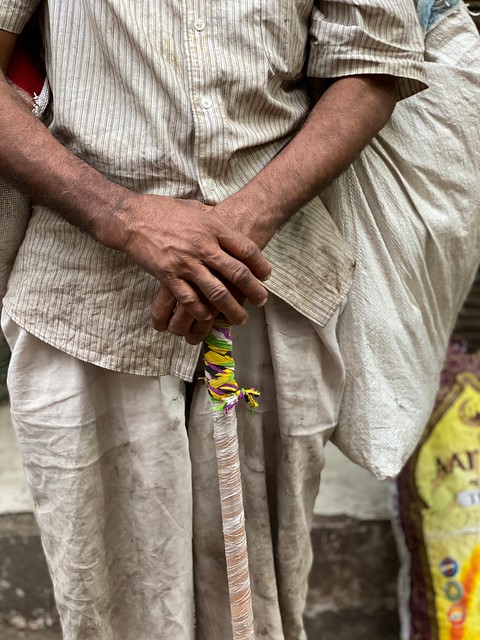 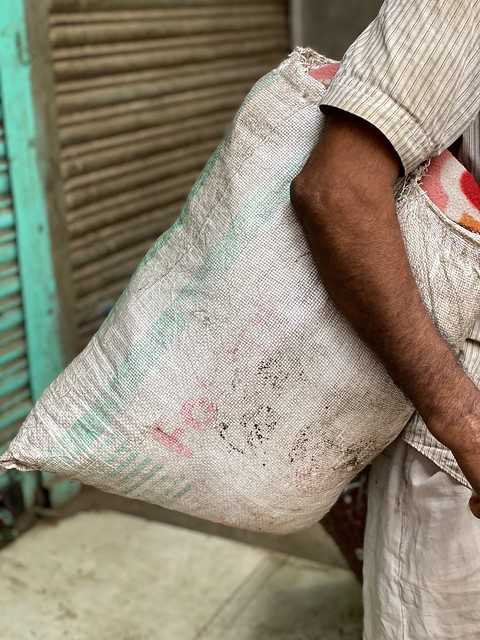 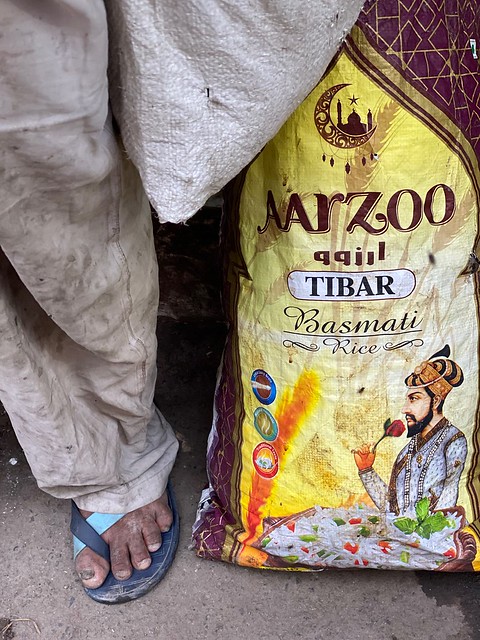 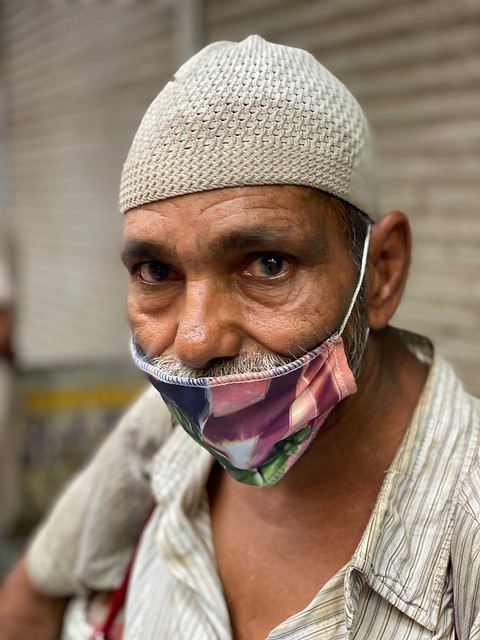 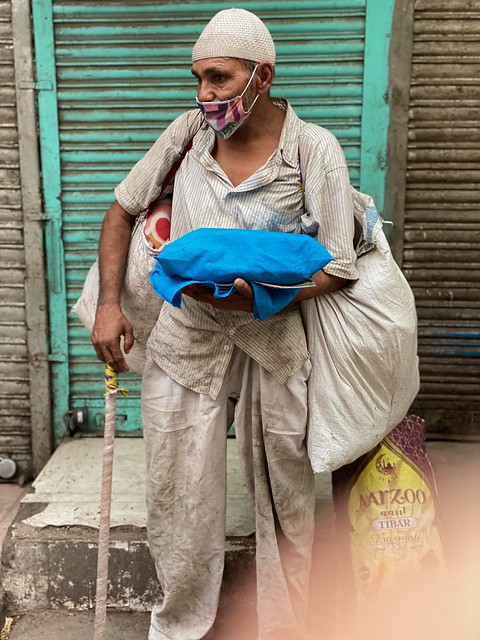