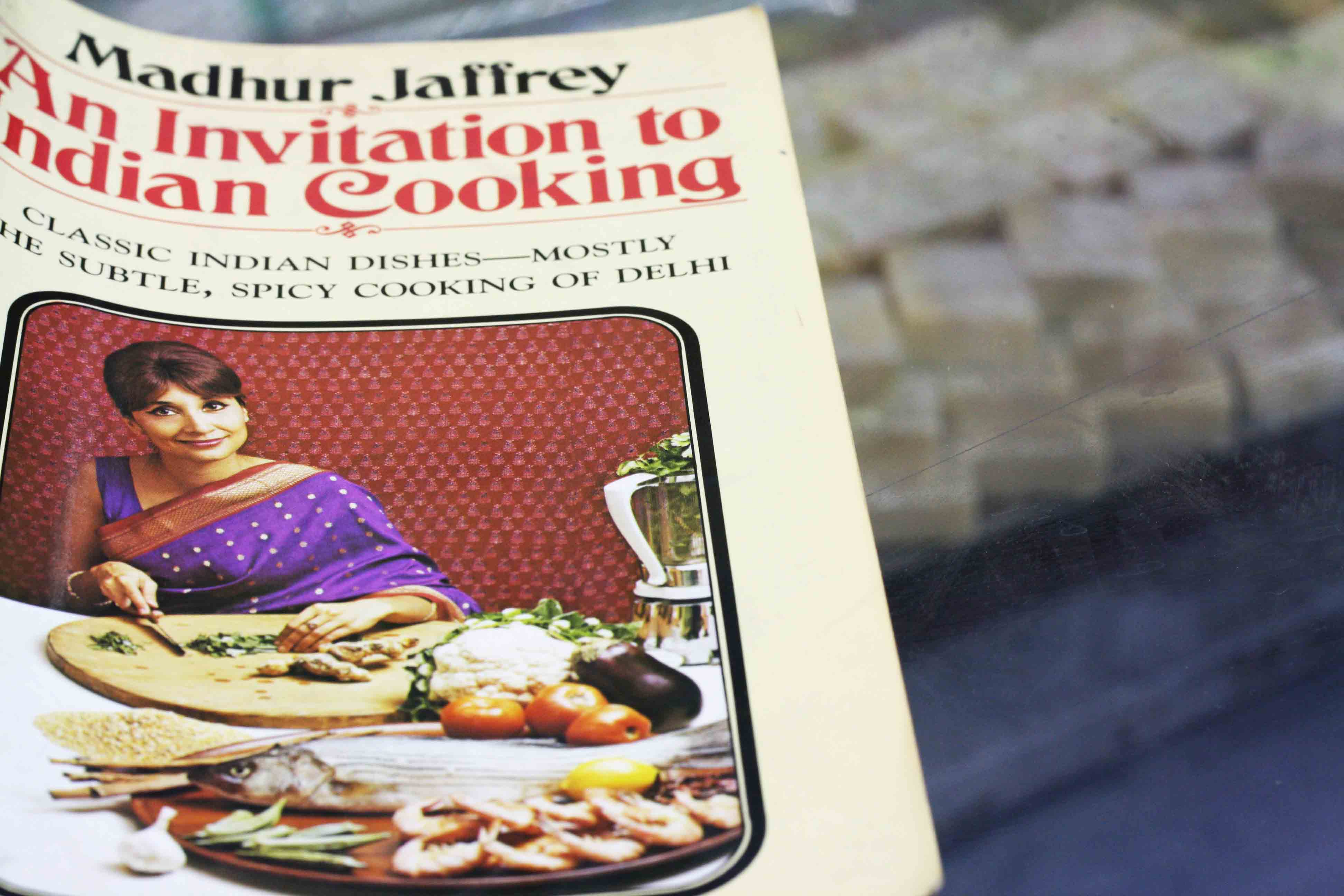 On the cover, dressed in an aubergine and red Kanjeevaram silk sari with a golden border, Madhur Jaffrey looks squarely at the potential buyer, her slender arms resting daintily on a chopping board. This was her first book.

An Invitation to Indian Cooking turned 40 in 2013. With more than 200 recipes, it introduced Delhi cuisine to the West. Subtitled Classic Indian Dishes — Mostly The Subtle, Spicy Cooking of Delhi, it was hailed by The New York Times as “the final word on the subject…perhaps the best Indian cookbook available in English”.

“It’s a classic,” says Pushpesh Pant, the Delhi-based author of India: The Cookbook, named by the same Times as one of the best cookbooks of 2011. “Madhur belongs to an old Kayastha family in (north Delhi’s) Civil Lines. Her love for food and Delhi, her elegant personality, her evocative style of writing, and her reputation as an actor in Merchant-Ivory films worked efficiently to introduce our city’s cuisine to the Western palate.”

Published in 1973 by Alfred A Knopf, Invitation was edited by the legendary Judith Jones, who worked on the books of culinary greats Julia Child, James Beard, M.F.K. Fisher, Marcella Hazan, Claudia Roden and Edna Lewis. In the book, Ms Jaffrey tells the Americans that she is giving them a “chance to understand and cook the food of one specific area — the region in and around Delhi, including the adjacent sections of Uttar Pradesh”.

She traces the origins of Delhi’s cuisine to the royal kitchens of the Red Fort, where the richly cooked Persian meat and rice favoured by the early Mughals was combined with Indian spices and vegetable dishes. From the empire’s heart, the recipes travelled to Hindustan’s lesser maharajas.

Although Delhi’s first internationally renowned cookbook does not have a recipe for nihari, a staple of Mughal-era Dehli, it can be read for its vignettes, the scenes that infuse the recipes with a special flavour. “Under the shadow of Jama Masjid’s massive walls, surrounding it on all sides, are hundreds of tiny stalls,” writes Ms Jaffrey. “They sell everything — pots, pans, bedcovers, saris, lungis, and of course all the different kebabs.”

The glossary consists of terms as charming as “Dey Dal May Pani” (“put water in the dal”), “Quon Bhai Chai Hojai” (“Well now brother, how about tea?”) and “Sharabi Kababi” (“one who likes to eat and drink”).

Flipping through Ms Jaffrey’s book, author Sadia Dehlvi says, “Like all Dilliwallas, my pride in our cuisine borders on arrogance, and I hesitate to put my stamp of approval on it.” Stopping at a recipe, she looks horrified and says: “Keema (mince) in baingan (eggplant)! I will never do that!” Handing the book back to The Delhi Walla, Ms Dehlvi, who makes excellent aloo gosht, mourns the disappearance of keema bhare karele and kachnar ke phool ki subzi. “Even shabdeg is dying,” she says.

An ideal Delhi cookbook need not limit itself to resurrecting lost dishes — the specialities have evolved with the city. “It should tell you not about the nihari of Karim’s,” says Mr Pant, “but about the parathas of Jawaharlal Nehru University, chaanp (chops) of Mayapuri, chhole paneer-wale chawal of Hauz Qazi and halwa-poori of Haji Tea Point, near Jama Masjid. The perfect Delhi cookbook must be super-local.”

Perhaps like the one that Charmaine O’Brien wrote in 2003. “I researched for Recipes From an Urban Village: A Cookbook From Basti Hazrat Nizamuddin by spending four months in the basti and visiting families where traditional dishes would be cooked for me,” says the Melbourne-based author about her book, which focused on the home kitchens of a central Delhi village. “I recorded the recipes passed on from mother to daughter orally.”

Ms O’Brien, who has also written Flavours of Delhi: A Food Lover’s Guide, has not read Ms Jaffrey’s first book, but she was influenced by her more popular A Taste of India. “The opening chapter is about Jaffrey’s growing-up years in Delhi and it inspired my curiosity about the city’s food history.”

Only a stubbornly thin Delhiite would be left unmoved by Ms Jaffrey’s nostalgia.

“But I am not sure I would follow her recipes,” says Anoothi Vishal, a food columnist who curates community cuisines in the Capital. “Some of them are so basic that they may appeal only to foreigners.” To Ms Vishal, who hasn’t come across any book with satisfying versions of Delhi dishes such as bharwan pasande, ishtew, shabdeg and besan ki subzi, a truly engaging book on Dilli ka khana is still to come. “Not only should the writer document the recipes of different communities, including smaller ones like the Anglo-Indians,” she says, “but she should also investigate if there are common dishes across community cuisines in the city to justify the ‘Delhi cuisine’ tag, instead of the Mughal/Kayastha/ Baniya cuisines that are community centric.”

Four decades after an Indian woman introduced Delhi’s cuisine to Americans, a Scottish woman is ready to serve the street food of Old Delhi to Delhiites. Pamela Timms’ Korma, Kheer and Kismet: Five Seasons in Old Delhi has been published by Aleph. “I spent five years wandering around the Walled City and getting to know some of the families who make the area’s street food,” says Ms Timms, who blogs at Eatanddust.com. “I have eaten everything I could get my hands on, pestering the cooks for their recipes and family histories.”

Like many British cooks of her generation, Ms Timms learnt authentic Indian home cooking through Ms Jaffrey. “ Even in that first book, she was telling readers to avoid curry powder and embrace whole spices,” she says, “urging us to try dishes like baingan bharta and gajar ka halwa — neither of which British or American readers had tasted in Indian restaurants of the time.”

Today, Invitation is a rare sight in book stores, though Ms Jaffrey, who lives with her violinist husband in Manhattan’s Greenwich Village, US, has become an industry — she has written more than 30 cookbooks. Responding to my congratulatory email, the 80-year-old author said: “I didn’t even know it has been 40 years! How very nice of you to do a story on my first book.”

The best tribute we can pay her and to our city’s other food chroniclers is to regularly dip our fingers in Delhi’s oil-filled gravies.

A taste of Delhi

Some other cookbooks on India