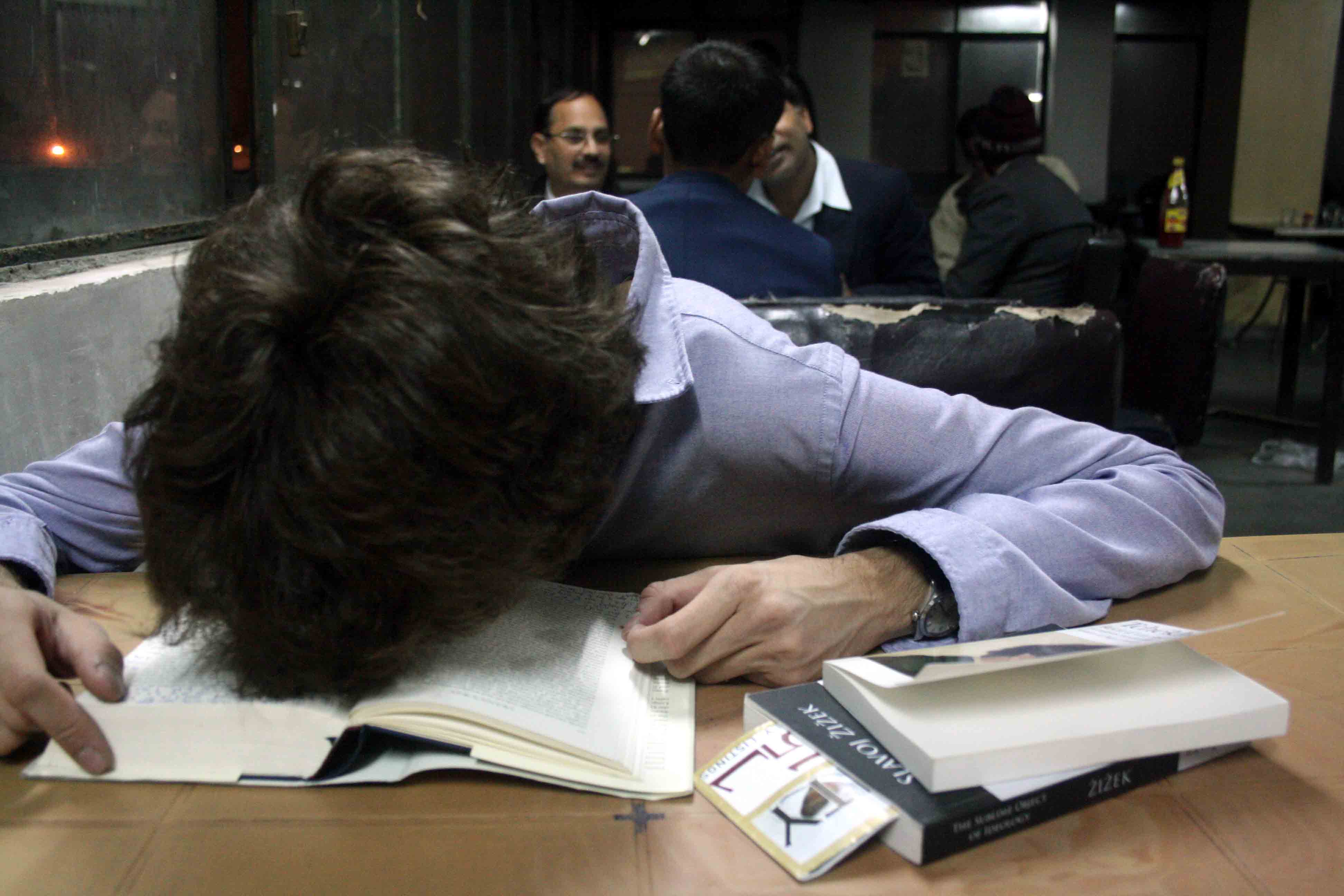 Today is the fifth meeting of The Delhi Proustians, a club for Delhiwallas that discusses French novelist Marcel Proust. Every Sunday noon for an hour we read his masterpiece, In Search of Lost Time. Since it was Chehlum on Sunday, the club’s fifth meeting was moved to Monday evening.

It is 7.08 pm and The Delhi Walla is with Jonas Moses, a French man living in the city. The crowded coffee house is stinking of piss.

A man at the door is hesitantly looking towards me. Is he a fellow Proustian? He is entering the men’s loo.

“The club hasn’t expanded yet,” says Mr Moses, who has become a regular. Pointing to his copies of Anton Chekov’s short stories and Slavoj Zizek’s The Sublime Object of Ideology, he adds, “May be we should set up another reading circle with a less demanding author.”

I open the novel. Page 50. The narrator is remembering the childhood holidays at his aunt’s home in Combray.

In the next room I could hear my aunt talking quietly to herself. She never spoke except in low tones, because she believed that there was something broken inside her head and floating loose there, which she might displace by talking too loud; but she never remained for long, even when alone, without saying something, because she believed that it was good for her throat, and that by keeping the blood there in circulation it would make less frequent the chokings and the pains from which she suffered; besides, in the life of complete inertia which she led she attached to the least of her sensations an extraordinary importance, endowed them with a Protean ubiquity which made it difficult for her to keep them to herself, and, failing a confidant to whom she might communicate them, she used to promulgate them to herself in an unceasing monologue which was her sole form of activity.

“I feel I’ve met such a person long ago, but where?” I say. “Was it some woman at Dr Gangola’s cottage in Nainital or at the district magistrate’s residence in Pilibhit?” I re-read the passage hoping to find an answer. I close my eyes and withdraw deep into my memories. But it’s dark there.

“Every family has a weak and eccentric person like aunt Leone,” says Mr Moses. “Perhaps she reminds you of yourself. You had earlier mentioned that you were a fragile child.”

Unfortunately, having formed the habit of thinking aloud, she did not always take care to see that there was no one in the adjoining room, and I would often hear her saying to herself: “I must not forget that I never slept a wink”–for “never sleeping a wink” was her great claim to distinction, and one admitted and respected in our household vocabulary; in the morning Françoise would not ’call’ her, but would simply ’go in’ to her; during the day, when my aunt wished to take a nap, we used to say just that she wished to ’ponder’ or to ’rest’; and when in conversation she so far forgot herself as to say “what woke me up,” or “I dreamed that,” she would blush and at once correct herself.

Mr Moses says, “This passage perfectly illustrates Proust’s great sense of humor. In French, we have an expression, “A d’eu taper le cul par terre”, which means, “It is so funny that you could beat up your ass to the ground.” Actually, Aunt Leone is like me. I take much pride in my insomnia and when somebody asks me if I slept well, I’m happy for again being given the opportunity to say, “Well, you know, I don’t sleep.””

“You know, I have insomnia.” Mr Moses grins.

We move to the next passage.

The sixth meeting of The Delhi Proustians takes place on 22 January, 2012. The loneliness of a Proustian Me, Marcel and you