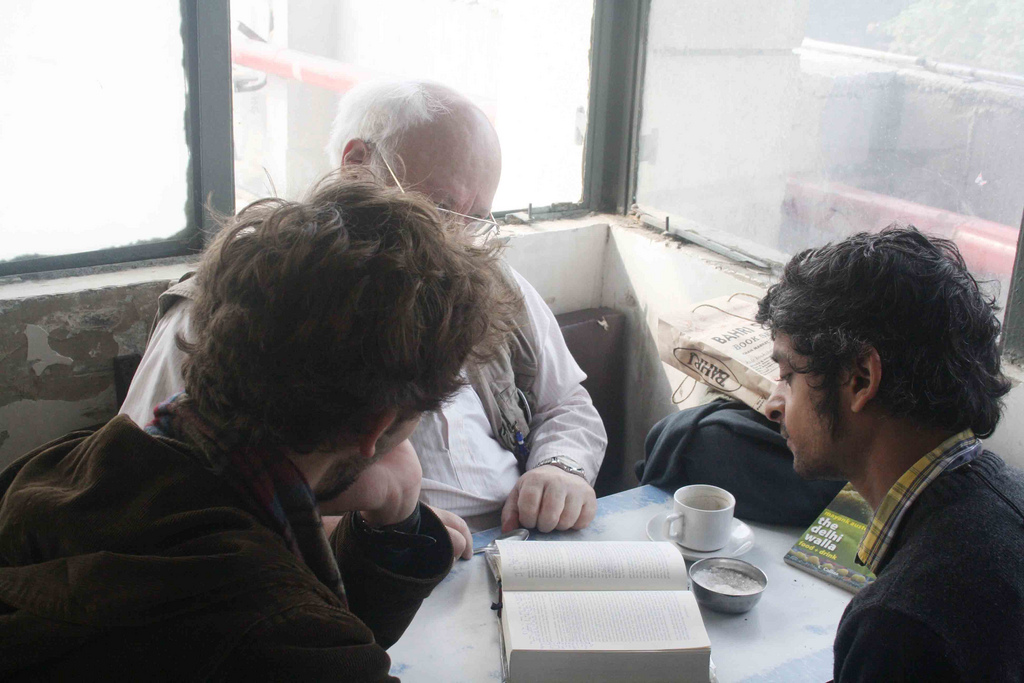 Today is the fourth meeting of The Delhi Proustians, a club for Delhiwallas that discusses French novelist Marcel Proust. Every Sunday noon for an hour we read his masterpiece, In Search of Lost Time.

It is 12 pm and The Delhi Walla is at the table with Richard Weiderman, a retired teacher from Grand Rapid, Michigan. A tourist in the city, he describes himself as a book-collector. We are reading Swann’s Way, the first of the seven volumes.

“I’ve never read Proust but he has been mentioned so often in so many books that he feels familiar,” says Mr Weiderman. “I don’t think I’ll ever read him. There are so many volumes. Reading the novel will take so much of my life.”

So is he an hour-long Proustian?

“I felt bad when you were the only one to attend the inaugural meeting of your reading club. Poor Mayank threw a party and nobody came.” Taking out the four-volume The Delhi Walla books, the book-collector says, “I bought these from Khan Market. The first thing that I do on waking up at my home is to check my e-mails. After that, I log on The Delhi Walla.”

Mr Weiderman orders a black coffee. My wallet is empty. I open the novel.

Turning to page seven in my copy, I say, “Since you do not plan to pursue Proust, may I ask you to read one of my beloved passages that can be appreciated in itself?”

Mr Weiderman takes over. I briefly turn to look for Jonas Moses, a French man who was here the last Sunday.

When a man is asleep, he has in a circle round him the chain of the hours, the sequence of the hours, the order of the heavenly bodies. Instinctively, when he awakes, he looks to these, and in an instant reads off his own position on the earth’s surface and the amount of time that has elapsed during his slumbers; but this ordered procession is apt to grow confused, and to break its ranks.

… and when I awoke at midnight, not knowing where I was, I could not be sure at first who I was; I had only the most rudimentary sense of existence, such as may lurk and flicker in the depths of an animal’s consciousness; I was more destitute of human qualities than the cave-dweller; but then the memory, not yet of the place in which I was, but of various other places where I had lived, and might now very possibly be, would come like a rope let down from heaven to draw me up out of the abyss of not-being, from which I could never have escaped by myself: in a flash I would traverse and surmount centuries of civilization…

I’m telling of Allahabad and of the moment we were leaving the town. The house was empty, without furniture or people. My mother and father were waiting downstairs in the car when I entered our reading room for one last time. Here I’d been introduced to George Orwell and his Burmese Days, earlier stolen from a public library. Here I’d also secretly read Sidney Sheldon’s The Other Side of Midnight, which was according to my sister, “not for children.”

Mr Weiderman is reaching the end.

… out of a blurred glimpse of oil-lamps, then of shirts with turned-down collars, would gradually piece together the original components of my ego.

“What’s really Proust for me on this page is that the author moves from a world of general statements to a more complex one. The introduction of the ‘I’ comes with all the nuances that are necessary to be true to what is life,” says Mr Moses. “I also love his description of the moment of waking up, when you are not sure yet of who you are and are expecting memory to come down like a rope from heaven. It’s like waking up with a lover between your arms and waiting for your world to reconstruct… you feel a comforting presence. It’s reassuring. I mean you tell yourself ‘I just woke up’ and nothing else is there in the mind. Then you fall asleep again.”

The clock strikes one. Putting on his hat, Mr Weiderman says, “May be one day I’ll consider Proust.”

Since there is a Muharram procession on Sunday, the fifth meeting of The Delhi Proustians will take place on Monday, 7 pm. Date: 16 January, 2012.

Richard Weiderman – Proustian for an hour … the sequence of the hours… Original components of my ego