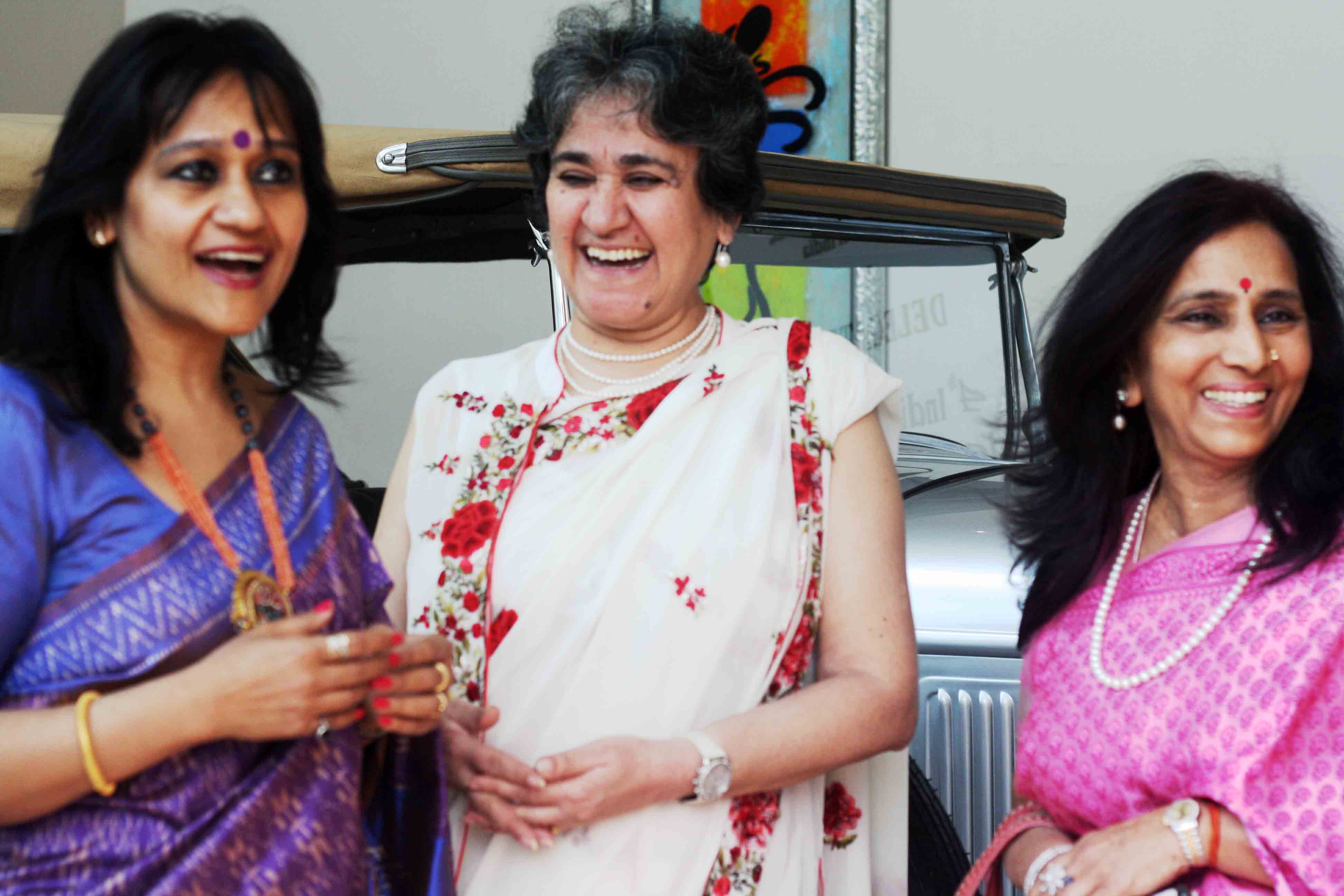 She is from Kashmir, but her real homeland is Page 3.

Having lived in the Capital since her student days at Delhi University’s arts faculty, Mrs Kaul is the turbo-charger of a social set-up that relies on being seen, heard, spoken to and spoken of at the right places, where long-standing friendships with names that matter the most are sustained by a combination of genuine liking and an opportune use of fame.

During the recent launch of a book written by an author whose name also happens to be Ratan Kaul, Prasar Bharati CEO Jawhar Sircar jokingly told the audience, “When I first saw the invite, I thought maybe it’s the Ratan I know who has written the novel, but on second thoughts I realized it couldn’t be her, since she was so busy being on Page 3.”

Is a public relations firm keeping Mrs Kaul in the newspapers?

“Are you mad,” she says, laughing so exuberantly that her body shakes. “It’s just that I have been attending parties long before the Page 3 arrived.”

Mrs Kaul is reclined on the long sofa of her apartment in south Delhi’s Greater Kailash-II. It’s one of the rare evenings when she is at home. She says, “Last Tuesday, I saw Sonia Gandhi and her daughter Priyanka at the wedding reception of (Congress MP) T. Subbarami Reddy’s grandson. Priyanka was accompanied by her daughter Miraya — a stunner, so tall, and she was dressed in a yellow anarkali.”

A few days earlier, Mrs Kaul was spotted at the India Habitat Centre with vice-president Mohammad Hamid Ansari’s wife. Another evening, she was sighted presenting a bouquet to the Turkish ambassador at his Prithviraj Road residence. “Sebnem is an anthropologist!” she says, referring to the envoy’s wife, adding, “I love both of them.”

Mrs Kaul has similar feelings for the Kuwaiti ambassador. She perks up at the mention of the Danish ambassador. “I know all the ambassadors and their wives,” she says.

Flitting across town in her chauffeur-driven Honda, Mrs Kaul sounds like a frequent flyer. “After Oxford, I had to rush to Sri Lanka” — by that she means a drive from the Oxford Bookstore in Connaught Place to the residence of Sri Lanka’s high commissioner in Chanakyapuri.

Her busy evenings illuminate the modus operandi of the Capital’s high society.

“We are not shallow people wasting our time,” says Mrs Kaul. “Serious business takes place in these parties.”

Last year in 2014, for instance, she says she helped promote two books on Prime Minister Narendra Modi. “The authors approached me for publicity. I arranged a sponsor and we did the event at the Durbar Hall in the Taj Palace hotel. Senior ministers Arun Jaitley and Prakash Javadekar sat on the dais (so did Mrs Kaul) and the audience included A-listers like the chief of army staff, Gen. Dalbir Singh Suhag, (banker) Naina Lal Kidwai, (former attorney general) Soli Sorabjee, and a battery of ambassadors. I wore a saffron sari.”

Saffron is the colour of Modi’s Bharatiya Janata Party (BJP), which had then just replaced the Congress-led UPA as the ruling establishment. In picking that colour, Mrs Kaul showed her sense of occasion, even survival instinct.

“I’m an apolitical animal; I vote Nota (none of the above),” she says. “I have friends in all three parties — the Congress, BJP and AAP (Aam Aadmi Party) — not because of their party affiliations but because they are good persons. I am also friends with Marxists.”

Two years ago, Mrs Kaul says she helped kick-start the annual Delhi Literature Festival. It was held at the Indira Gandhi National Centre for the Arts, and then Delhi chief minister Sheila Dikshit spoke on the first day. “Last year, we had Kejri in a talk with (newscaster) Barkha Dutt,” she says, referring to AAP leader Arvind Kejriwal, who was the chief minister at the time.

It’s tempting to see this gregarious woman as just another smooth-talker who keeps Delhi society running. But the disarming Mrs Kaul defies the type — she doesn’t even carry a mobile phone. She shows no snobbery; she is not possessive of her contacts and generously nudges her important friends to give their visiting cards to upcoming artistes and authors who need connections.

Born in a railway officer’s family, she arrived in Delhi in the late 1970s for her postgraduation. Not long after her marriage, she was hired as a programme officer in a non-profit organization called the Indian Federation of United Nations Association. “That job set me off,” she says. “All the time, I was meeting visiting heads of state, and diplomats and ministers. My first high was when I shared the dais with (president) Giani Zail Singh. It was my first photo with a VIP.”

Today, Mrs Kaul has dozens of photographs with such VIPs (those pictures make up the bulk of her website). She likes getting clicked with them, almost for a lark.

“I don’t try hard to make contacts,” says Mrs Kaul. “There are four or five big business chambers in Delhi. I’m on the mailing lists of all of them, and they regularly send invites for their events. I go, clap, smile and make friendships that I nurture over years. I wish these friends on their birthdays. I’m helpful. I’m nice. That’s why when I email an invite to them for my events, they all turn up.”

She, too, turns up at every important gathering in the city. Mrs Kaul has been seen at the annual Hindustan Times Leadership Summit, and at the India Today Conclave. She says she was invited as a “complimentary guest” to The Economist magazine’s 2014 India Summit.

“You’ve only seen me flitting around parties and so have no clue on my various projects. I am currently working on a book on education,” she says.

Setting down her glass of piping hot kehwa on the coffee table, Mrs Kaul playfully shouts, as if speaking on a podium, “Public diplomacy is my forte.”

And her unique selling point too.

“People get in touch with me if they want to do some grand launch,” says Mrs Kaul. “Currently, I’m fixing a book discussion for a politician’s wife who has written on poverty. I’m also ideating for a glossy magazine’s award function. I’m helping them design the show, get the VIPs, get the chief guest, get the guest of honour. Of course, I get paid.”

In other words, she is a one-woman PR company.

“No, no, no, no, no,” exclaims Mrs Kaul cheerily. “I’m an MA first class! Don’t have to pass down a PR company to my daughter. I pick up parties for fun. When Subbarami Reddy asked me to come to his party the other day, I dressed up in a Kanjeevaram, drove to the Ashoka hotel, had chicken tikkas and got myself clicked with Simi Garewal. Simple.”

But some things are not as easy. Mrs Kaul has still not fully assimilated into the club of the Capital’s new rulers. She wasn’t invited to the recent wedding reception of BJP leader Amit Shah’s son. “I’m not heart-broken,” she says.

In any case, Mrs Kaul’s diary is full. In the coming days, she is hosting an award function at Le Meridien hotel. Soon after, it will be time for the Delhi Literature Festival, for which she is the adviser. She must also show up at the book launch of her “bum chum” Tharoor.

“Every day is different,” says Mrs Kaul. “There’s no time to relax. Not even to look at Page 3.”

[This is the 99th portrait of Mission Delhi project]

Life’s a party (this photo by The Delhi Walla)