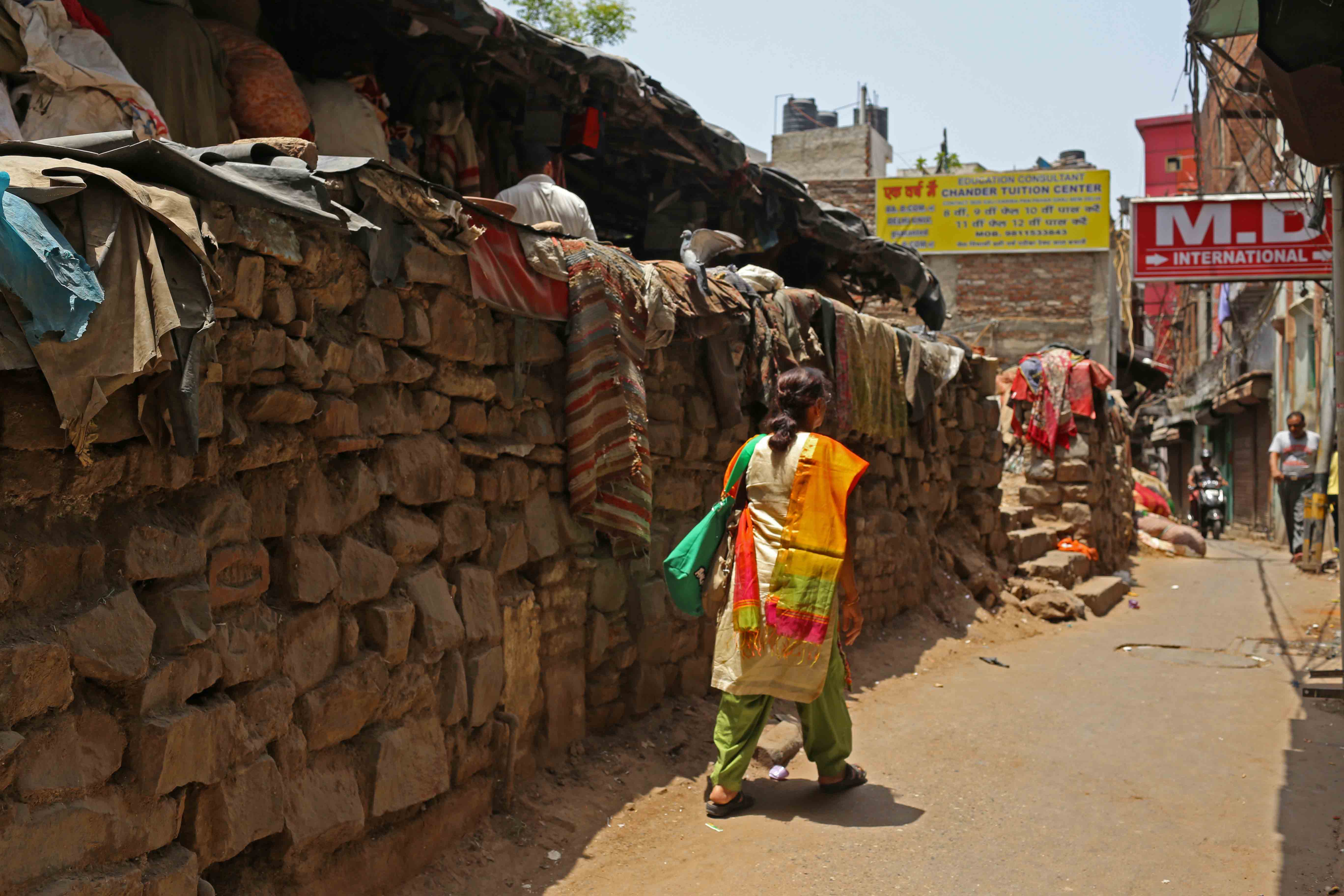 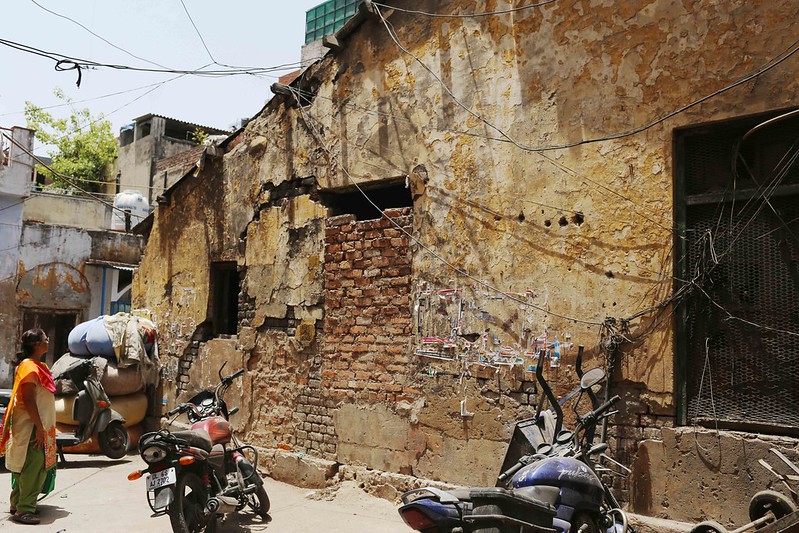 The elderly woman suddenly stops, looks up at a private balcony and seems lost in thoughts. She then shakes her head and walks on.

The Delhi Walla meets Asha Sood one scorching hot afternoon in Paharganj’s Main Bazaar. “I’m searching for 3631, Ramnath Patwa,” she says. It was her childhood home.

Entering into a shaded lane, Ms Sood says, “Nothing has changed, nothing… Main Bazaar still looks the same… I have come here after sixty years… less bakeries though.”

“I could not wait any longer for the weather to cool down,” she says. “I have to go back to Albany.”

It turns out that Ms Sood is an American citizen on a visit to Delhi. Her parents were from Punjab. Her father worked with the railways in Quetta (in modern-day Pakistan) and had to move to Delhi after the Indian partition. She spent the first few years of her life in Paharganj.

“These are the streets of my childhood,” says Ms Sood. “Mother used to dress me in salwar kurtas but sometimes she allowed me to wear long skirts. Once she bought me an orange lehenga. I wore it to watch the dusshera procession.”

On reaching Chhe Tooti chowk, Ms Sood says, “There was a vegetable market here… I also remember Ram Prasad halwai who made sweets in desi ghee… I must show you the street that goes straight to Bangla Sahib (Gurudwara)….”

Ms Sood stops at several places to ask shopkeepers the way to the street where she lived.

“Our home consisted of just one room on the first floor of a building… it was originally a factory to make silver toe-rings… When we arrived in Delhi, we were allotted a camp outside the (New Delhi) railway station. The first priority for the refugees was to find a house. The resourceful among us would hunt for houses abandoned by Muslims (who had left for Pakistan). But father said that the government would arrange for our housing. It was mother who would go out. Those were dangerous times. People sometimes killed each other over the possessions of these houses. Mother ultimately found a room in Ramnath Patwa.”

On emerging out of yet another lane, Ms Sood comes face-to-face with a ruined building; it has a sloping roof. “My God, it is still standing!”

This was her first school. The door is locked. The windows are cobwebbed.

It is getting hotter.

Walking from one serpentine lane into another, Ms Sood stops briefly to catch her breath. “Everyone suffered in the partition. Mother told me about a Muslim woman who climbed a tree outside the (New Delhi) railway station to save herself from a mob. She was wearing a burqa… she had a rifle. She killed quite a few of her attackers before she was killed herself.”

Finally, we reach Ramnath Patwa. “The house must be somewhere here.” Ms Sood stops outside a doorway. There is a small courtyard inside. “Yes, this is it! The toilets were just beside the door. The entrance used to stink. I covered my nose each time I would enter. The stairs to our house were on the left, just after the latrines… the toilets are still there!”

Hesitating for a moment, she says, “I’m going inside.”

The courtyard is empty but gradually fills up with men, women and children who emerge out from the surrounding single-room homes. Ms Sood tells them– “I’m not dangerous. I lived here many many years ago.”

One of the women walks towards her and says, “All the old families have gone.” Ms Sood looks around with a searching eye, her head raised upwards. “That is mother’s home!”

The house is bolted. The current owners live somewhere else. Ms Sood sits down on the stairs. “Many refugee families lived here. Most were Sikhs… my parents had to struggle a lot. We had no running water. Everyday mother had to go outside to collect water from a public tap. Sometimes she even washed the clothes outside… there are so many memories… I had an elder brother. He died in this house. He had measles. To this day I remember the sight of his body laid out on the floor of this house….”

Today, Ms Sood has three siblings, two children, and a grandchild. All of them are in America. Her mother, in New Jersey, is in her nineties. Ms Sood will fly home early next month.

[This is the 100th portrait of Mission Delhi project] 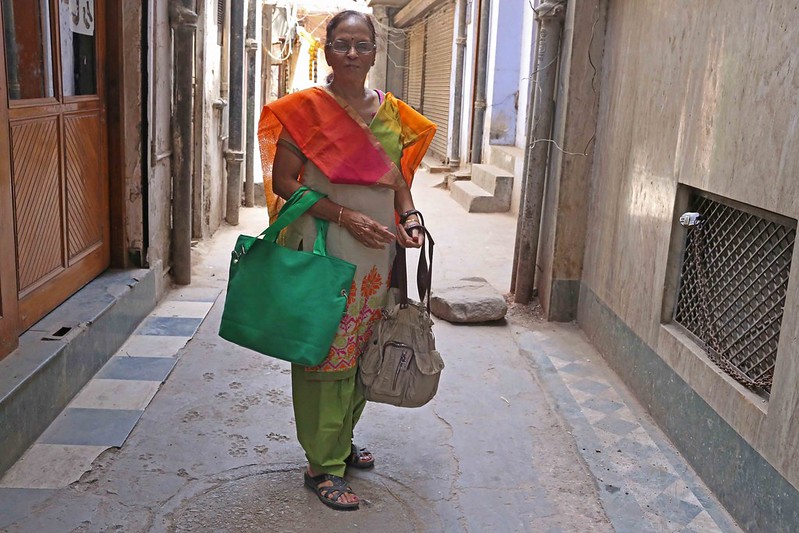 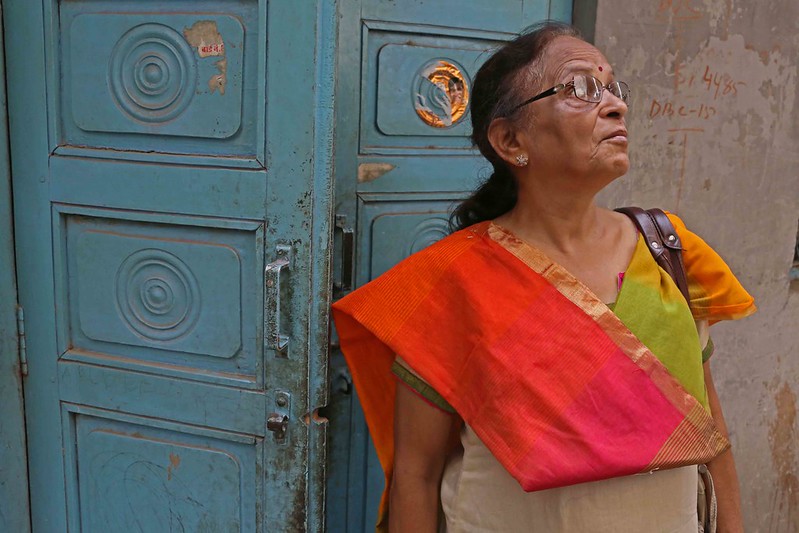 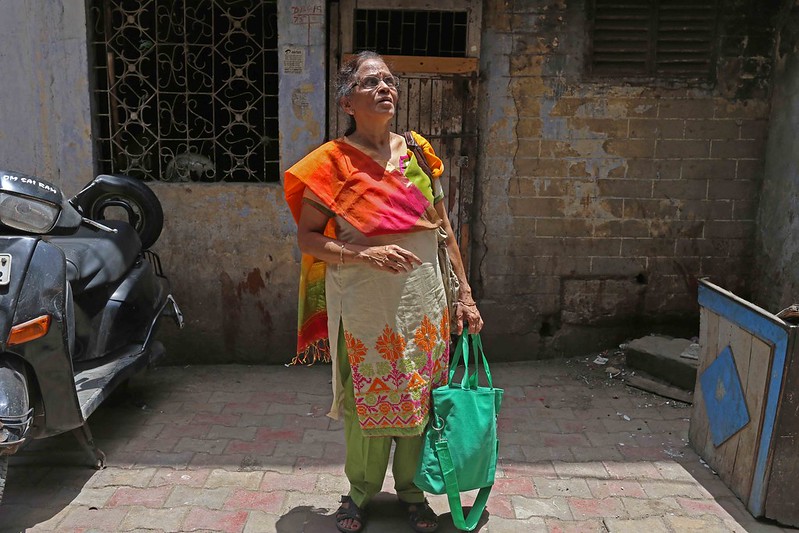 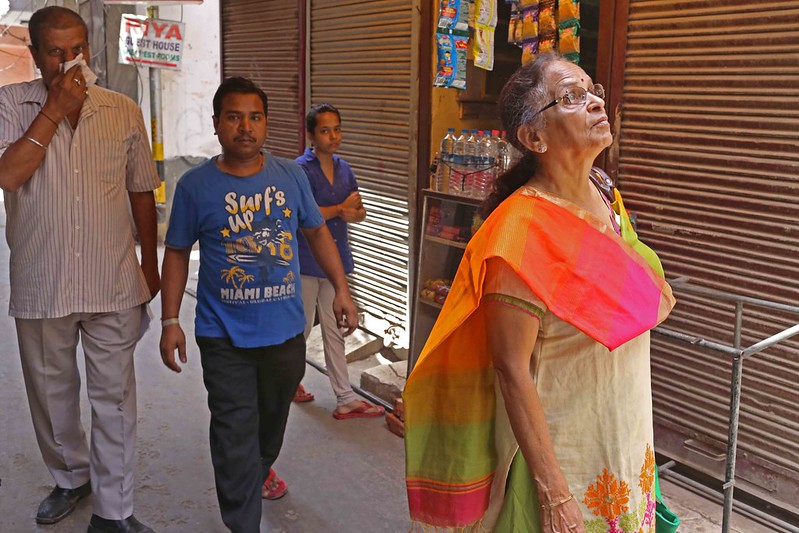 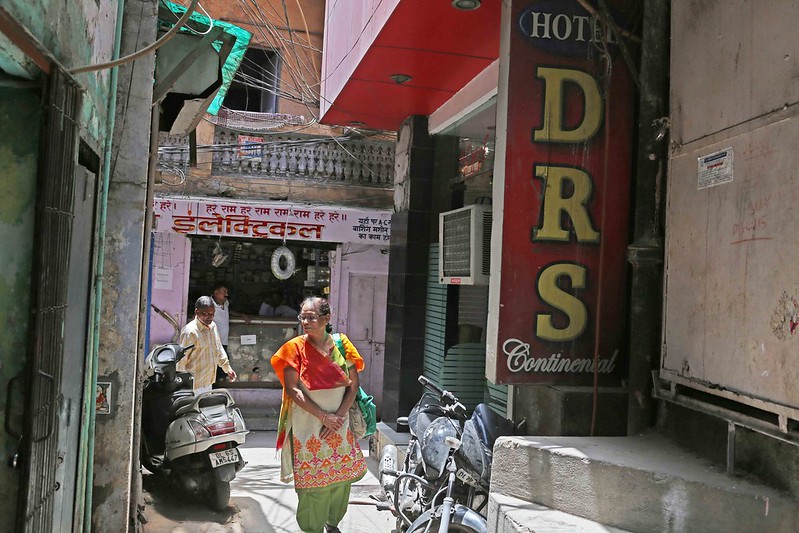 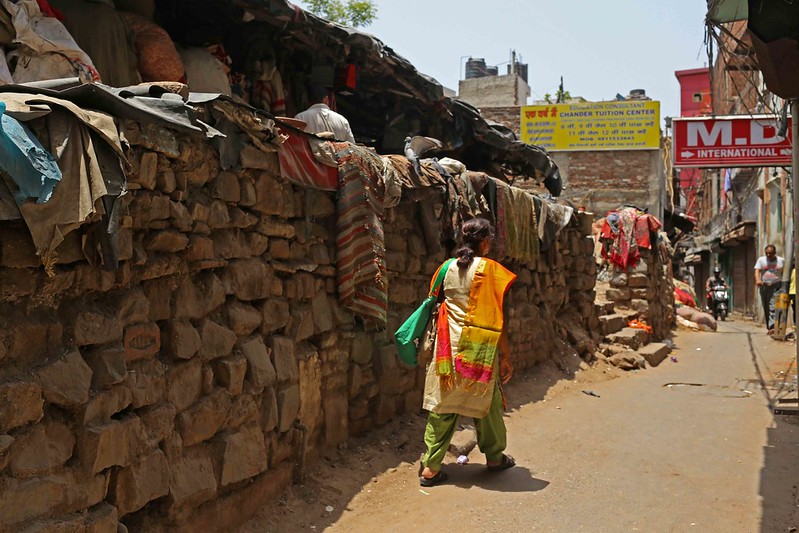 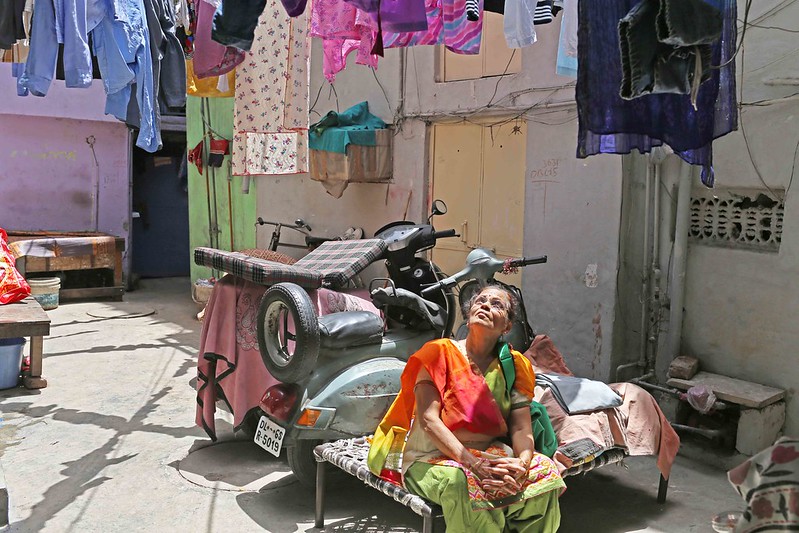 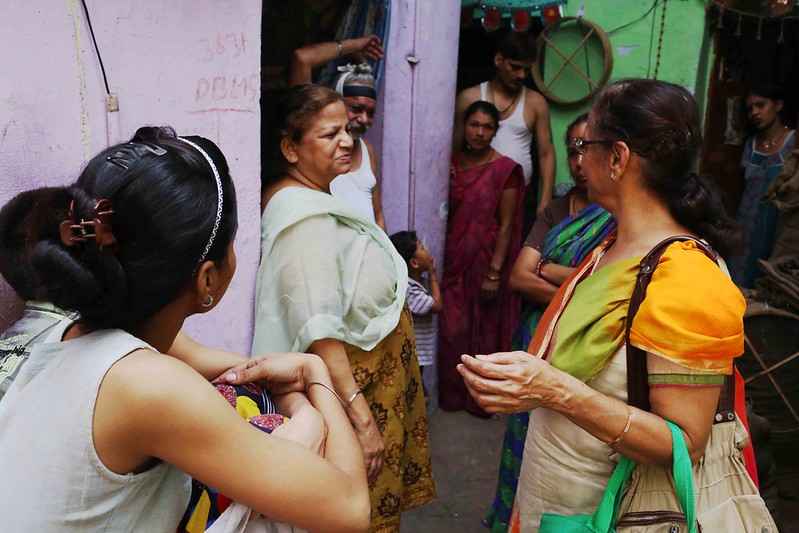 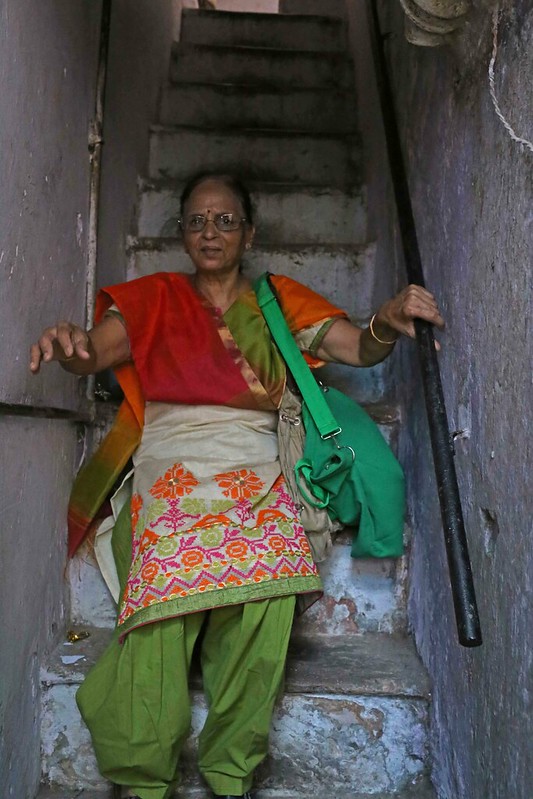