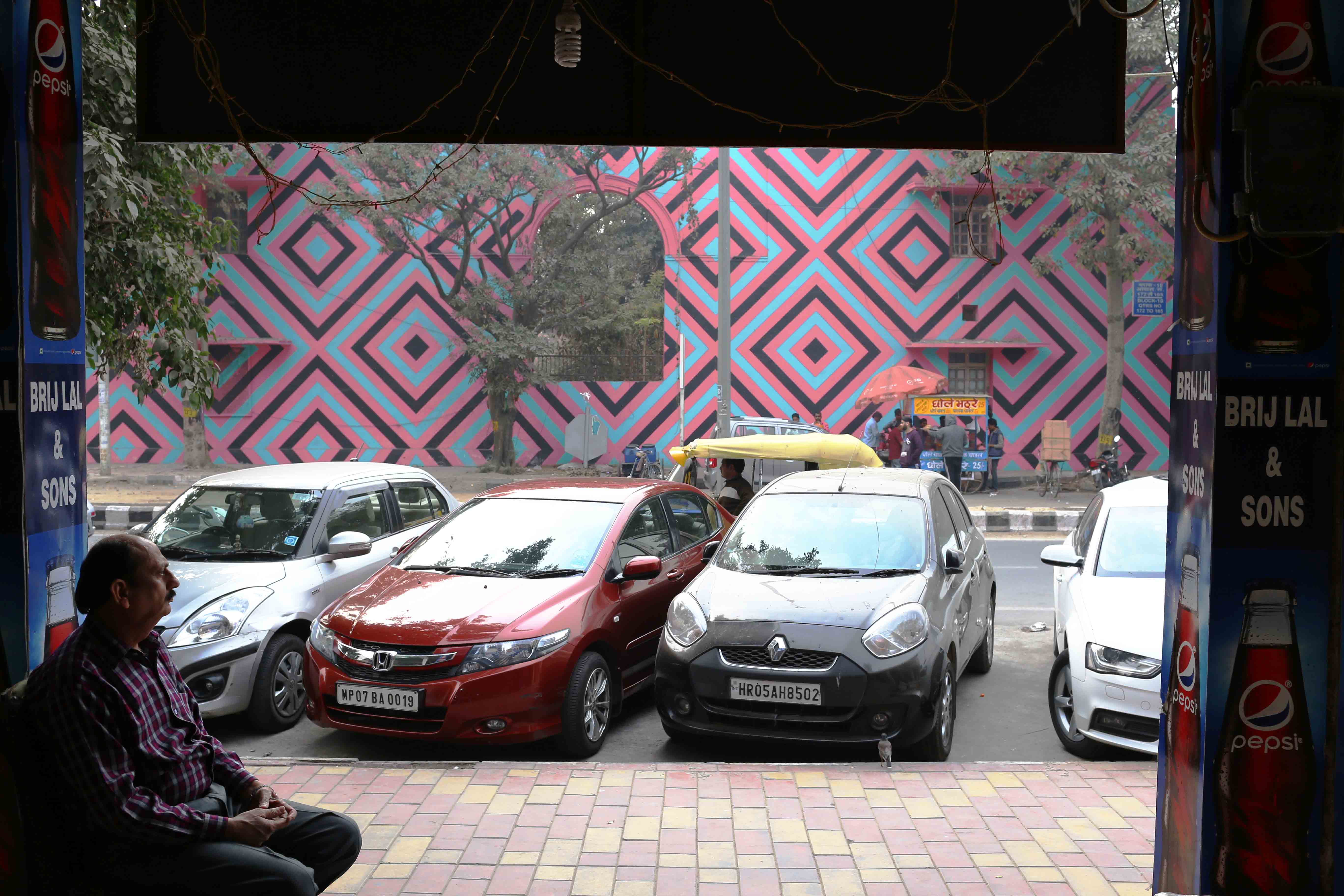 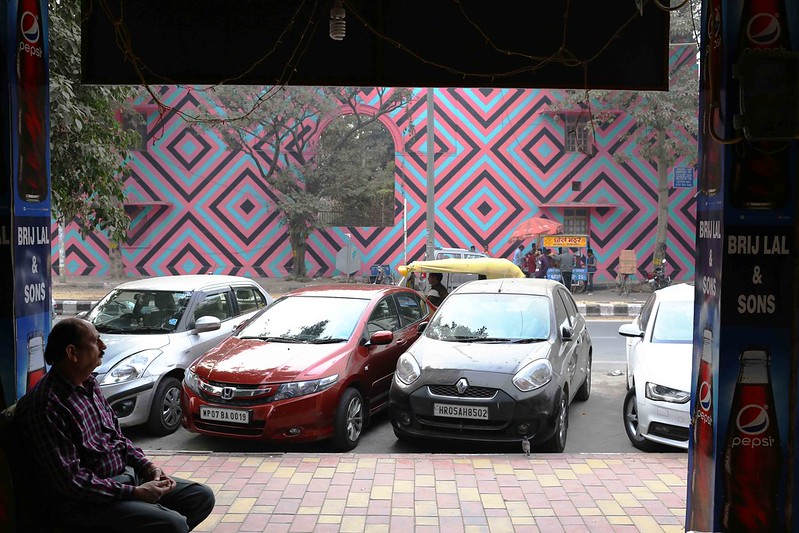 Public reviews of a public display.

Public art, so common in world cities, has been slowly finding its space in Delhi, a huge metropolis that swallows up all puny efforts. Nonetheless, any art touches the lives of those who look upon it, stirring something inside them, and here it’s no different.

The city had been hosting a two-month-long street art festival that ends mid-February. The St+art Delhi festival, say its organizers, “aims to change the city’s landscape with art in public spaces through mediums such as murals, installations, performances, workshops, talks, screenings”.

As part of this festival, Australian artist Reko Rennie created a mural in about 10 days with help from acclaimed sign-painter Kafeel and his team. The canvas is a wall in one of the residential blocks of central Delhi’s Lodhi Colony, home to government employees. More than one wall here has been subjected to the creative fancies of street artists from across the world.

The wall chosen by Mr Rennie enjoys a privileged location. Right opposite it is the posh Mehar Chand Market—though behind the market is the Harijan Colony slum.

On a recent afternoon, The Delhi Walla sought reviews from a cross-section of people spotted around the artwork. They ranged from students of the exclusive Sanskriti School enjoying iced tea at Elma’s Brasserie to a pavement barber who has been working at this location since 1995.

Prem Sagar, a ‘chhola bhatura’ vendor whose cart is stationed just in front of the wall

I think this wall painting was finished last week. I myself arrived only 10 days earlier. I have been seeing a large number of white people coming in their cars almost daily to take photos of the wall. Sometimes, Indians also come with their cameras. A few of these people walk over to my thela (cart) for a plate of chhole bhature. I think every house should have this kind of design.

Wamika Sachdev, a Sanskriti School student seated at a table by the window in Elma’s Brasserie

That wall is the first thing you notice upon entering Mehar Chand Market. It stands out so individually, and it demands attention so aggressively, that you feel as if it’s giving competition to the market itself. However, I’m not sure if the residents of the block would be happy about it. The strong jazzy design looks as if it’s intruding on to their private space…. I think such an artwork should have been made on the side of the market.

Punita, who gave only her first name and describes herself as a housewife, lives in Lodhi Colony—the wall covers a part of her ground-floor flat

It’s eye-catching, very colourful. Previously, the wall was light pink, like all the other walls and houses here. I speak for all the colony residents when I say that we all would also want our house walls to be similarly painted. Another reason I’m very happy about this painting is that people have stopped dumping their garbage against that wall. Maybe they think somebody will scold them if it looks ugly.

Hot pink. Turquoise. Black. So super bright. Really attractive. So attractive that it looks for you even if you are not looking for it. Yet the design itself is quite simple. Just concentric squares. But if you look at it as a whole, it presents a kind of illusion…the same pattern repeats itself again and again across this canvas of a wall. The feel is matte, not glossy. I like that.

Now when I look carefully at it, I think I particularly like the use of black and red colours. But I confess I can’t understand the meaning of the design. I’m sure the artist wanted to say something to the viewer. I’m sure that very well-educated people would understand something by looking at it. I would sometimes watch from inside the showroom—just where I’m standing now—when they started working on it. Initially, I thought that maybe they would paint the wall in some shining colour. But it became clear in a few days that they were working on a special scheme…. I hail from Bhagalpur (in Bihar); here I live with my wife and two children in a building in Sangam Vihar where four of us share one small room. Recently, I told my wife that if we ever get our own house in Delhi, we will paint the walls in one of the new designs that have come up in Lodhi Colony. Not exactly the same design, but something similar.

I know the history of this area. You see my shop? It was started in 1947 by my grandfather, the late Shri Brijlal, who came as a (Partition) refugee from Pakistan. I tell you that these (pointing to the residential blocks of Lodhi Colony) were built by the angrez (British). The buildings were mostly white. Then, some years ago, they were painted a light pink. But look at this wall!

There is a different mazaa (pleasure) to bright colours. Imagine what our lives would be like without them. Another beautiful thing has emerged from this design—now people don’t urinate on the wall; earlier, somebody or the other was always doing that. That pavement used to stink.

Also, we have finally got rid of all the nonsensical posters that would be stuck daily on the wall. It was a very ugly sight. One morning, you would see a poster of a garlanded man congratulating himself on becoming the secretary of some neighbourhood association; the next morning, another poster would come up celebrating some local politician. Now those people are so scared by the new design that they don’t put up their posters, at least on that wall. I think even they do not want to destroy the new-found beauty of the wall…. But don’t ask me to analyse the wall painting. I don’t work in the newspapers…. Let me see. I never saw such a design before. …It’s so beautiful that you can’t describe it in words.

Yes, I have seen this wall. Earlier, too, it almost looked the same.

Baleshwar Kumar Thakur, a pavement barber who sets up shop just beside the wall

The work is very clean. It reminds me of Modiji’s (Prime Minister Narendra Modi’s) Swachh Bharat Abhiyan (Clean India Mission). In fact, the design looks swachh. If I were the painter of this wall, I would also have painted Modiji’s face. After all, the idea of cleaning the country came from him….

Have you seen the painting in (nearby) Khanna Market? Somebody has calligraphed “Ek Kadam Swachhata Ki Ore” on one of the walls there. It has been done so beautifully that I keep staring at it each time I pass by it. That sign always cheers me up. I salute the artist who drew it. But this is also beautiful.

I liked the painters who painted it. They were very hard-working. They would come in the morning and leave only at night. I wondered just when they took some rest. They would always greet me. Sometimes they would sit and even talk to me bhaichaare ke naate (for brotherhood’s sake).

Mohammed Akhtar, a carpenter who lives in the Harijan Camp slum behind Mehar Chand Market

There’s no big deal about this artwork. It’s so-so…looks like a carpet. People aren’t excited about it. Neither are they disgusted. If I were the artist, I would have first met the people who live here and asked their opinions on just what I should paint on the wall… I would have actually liked to paint Gautam Buddha. He would be seated on the ground and around him would have been trees and birds. But the artist did not ask me for an opinion. 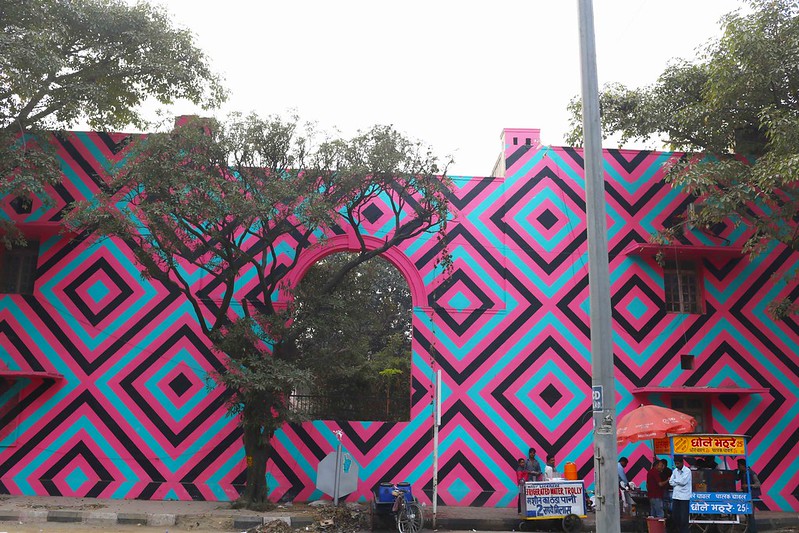 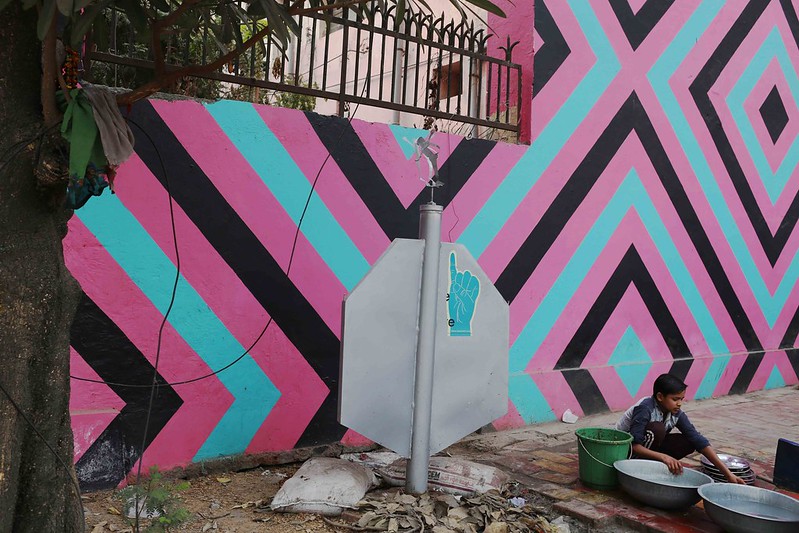 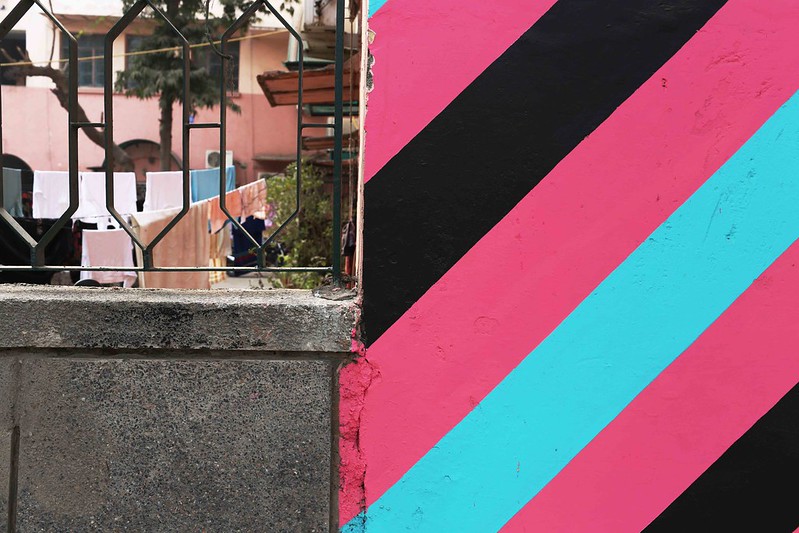 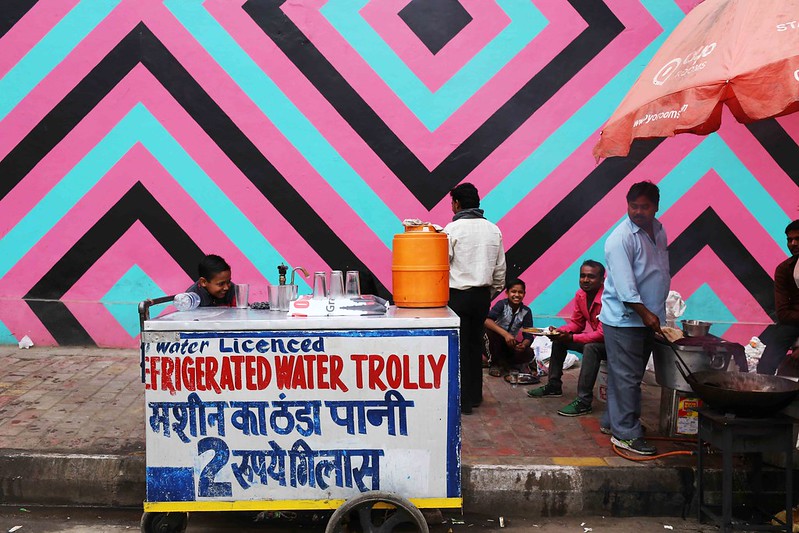 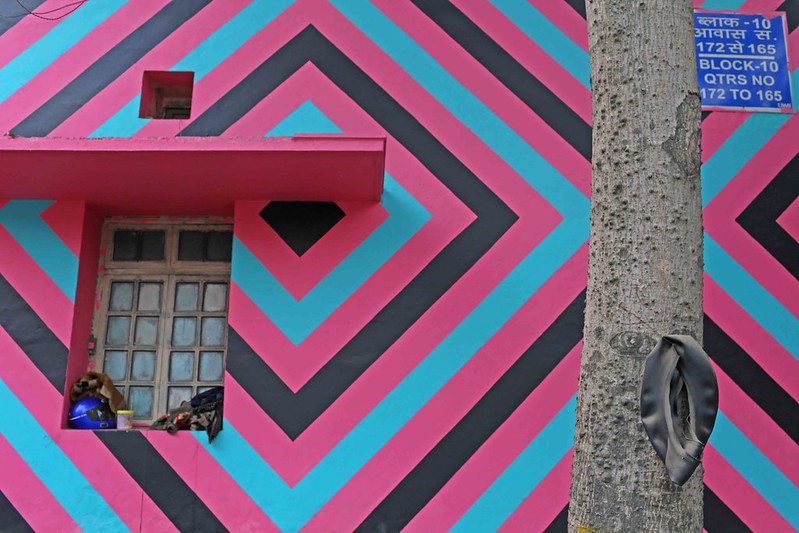 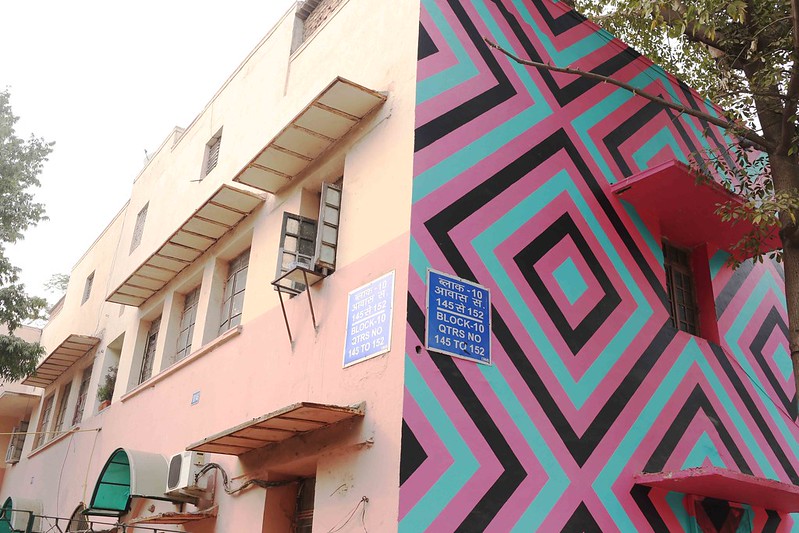 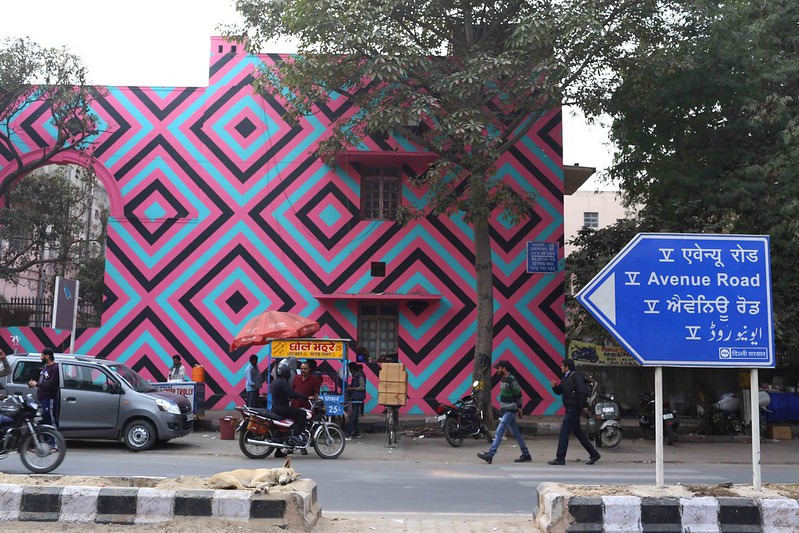